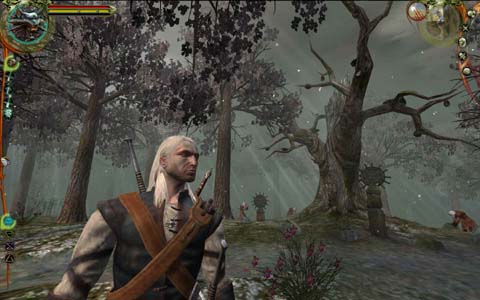 CD Projekt made good on their promise to release an Enhanced Edition of their best selling game, The Witcher. The retail version became available for sale in the US on September 16. The gigantic download version was posted on September 19th. At first, CD Projekt’s designated server was overloaded but soon other servers picked it up and things have smoothed out. After I finished the last of the Witcher books, I’ve been playing the Enhanced Edition for a couple of weeks now and am well into Chapter Two and thought I would pass on a few impressions.

Load and save times are vastly improved. At first I was waiting about 30 sec at the load screen but I cleaned out saved games from the previous play-through, drastically reducing the wait time for loads and saves. Once the player is in-game, moving into and out of houses is now a matter of a few seconds. This results in a much more fluid gameplay experience. Team Red, the devs at CD Projekt responsible for The Witcher, have reworked the unwieldy inventory,  splitting it into two sections. The Satchel section is still your general inventory where you store stuff like potions, alcohol, food, rings, oils and powders, etc.  But now there is a new section called the Alchemical Sack. This is where you keep the multitude of raw materials required to  make your potions. You can also now sort and stack inventory items with the click of a button, which is a huge time saver, especially for you OCD types. There is a sort of icon-based index in the Alchemical Sack that lets you identify categories of ingredients with a single button click. Nice.  As for the rest of the improvements, they are more subtle but taken together add up to a more refined gaming experience. NPCs still have the same body model types mentioned in my Witcher review but now some have differently colored clothes. The dialogue has been tweaked in places though it doesn’t jump out at you.  Language is, if anything, even more profane so if you have little ones playing out in the hall within earshot be aware that the characters in The Witcher cuss like sailors. If you originally purchased the uncensored import as I did, fear not, the update checks your version and proceeds accordingly. I still have the uncensored version even after installing the Enhanced Edition, also referred to as patch 1.4. Be warned, this patch is huge, almost 1.9 GB if you download everything.

All in all the game is much more agile. Anyone who has been on the fence about buying it should feel free to take the plunge. You can purchase the boxed Enhanced Edition from your favorite brick and mortar store or online vendor or just buy it in download form. if you own the original game you can download the EE for free. Yes…free. You’ll need to register the game at The Witcher official forum to install it. Those who bought the original Atari version without a paper manual and thus no printed code can contact Atari for a registration code. For those worried about DRM issues, Impulse, the digital distribution system started by Stardock, has a “clean” version available for download.

I’ll be adding a mini review once I complete the two new expansion quests. Right now I’m having too much fun replaying the main game the way it should have been all along.