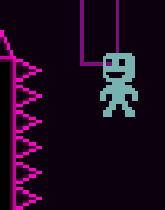 “It’s hard to believe that, after a tough 2009, VVVVVV was going to be Terry Cavanagh’s last game as a full-time independent developer. “The only thing I really had going for me was VVVVVV … I was having so much fun with it”, and it shows. Despite being broke, living back with his parents and all but abandoning his dream, Cavanagh produced VVVVVV, a sprightly, unalloyed delight — go and play it.“

I’m a bit late to the party with this one but hey, if I can’t talk about one of the greatest platformers I’ve ever played a year after its release then what the hell can I talk about? I’d heard a lot about VVVVVV but not for a moment did I expect to be placing it alongside the likes of Braid, Portal and World of Goo in the lofty echelons of my coveted Hall of Fame.

VVVVVV is a 2D platformer built upon a single glorious idea. There are only three actions in the game: walk left, walk right and flip. Flipping effectively switches the gravity for our blue hued dude Captain Veridian, moving him from the floor to the ceiling and vice versa. He can only be flipped when he’s grounded but he’s still mobile in mid-air. And that’s it. It doesn’t sound like much but Terry Cavanagh takes this simple concept to such stratospheric and dizzying heights that I was grinning (and grimacing) with every new challenge that he threw at me. Like Braid, Portal and World of Goo, it’s one of those games that manages to squeeze every drop of creativity from its juicy core mechanic.

The story is simple enough: Captain Veridian’s spaceship, after suffering from some sort of dimensional interference has crash landed on a mysterious planet and his crew of five — Doctor Violet, Officer Vermilion, Doctor Victoria, Professor Vitellary and Chief Verdigris — have gone missing thanks to the on-board teleporter going bananas during evacuation; it’s Veridian’s job to find and rescue them all. 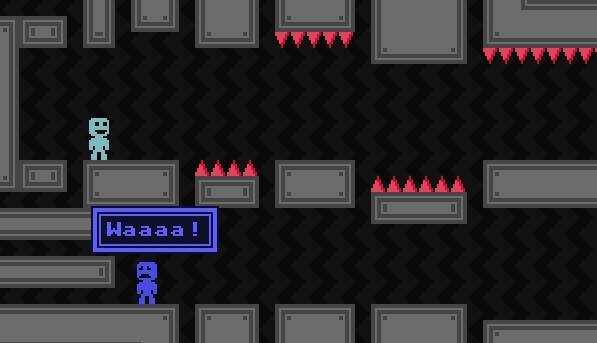 After a short section gently introducing the game’s flipping mechanic you’re dropped into the overworld within which all of VVVVVV’s ‘levels’ are nestled and, hopefully, the missing crew members. There’s a natty map system (similar to that of Super Metroid’s) that plots your progress as you explore and discover the world, and highlights areas emitting unusual energy patterns to investigate. These energy patterns are usually teleporters which allow you to access some of the aforementioned levels as well as providing a quick means of travelling across the overworld. Other than that the game gives you no other direction so you’re free to go where you bloody well please. Which is a great thing when a game is as difficult as this. 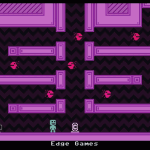 Getting the trinket on this screen (formerly in the top right) was crazy fun.

You see, VVVVVV is tough, especially if you intend to collect all twenty shiny baits trinkets dotted throughout it. I died just shy of 2500 times in the 5 hours it took me to fully complete, which (if my abysmal maths are correct), is about once every 7-8 seconds (I attribute this to stiff cursor keys and cold fingers). Thankfully VVVVVV makes every effort to ensure death isn’t an issue: checkpoints are visible entities, numerous and perfectly placed between every challenge; the dying animation is fleeting with an almost instantaneous respawn and there are no lives or game over screens to speak of. Each of these elements lubricate the cycle of dying and retrying to such an extent that, instead of having to grind your way through sections you’ve already done or awaiting overly long death animations and respawns, you’re straight back in the saddle refining your technique to overcome the immediate challenge at hand.

“But if I can’t do these challenges then I don’t give a rat’s ass about how ‘lubricated’ this cycle is”, I hear you say. This is where the open world comes into play. If you’re having difficulty you can go elsewhere and come back later. You don’t have to do any particular level first and with each one presenting a different twist to the others it keeps the experience feeling fresh. There’s a level which introduces light beams that automatically flip Verdian and one that wraps the edges of the screen to mind-bending effect; another level called ‘The Tower’ scrolls the screen vertically, revealing spikes at the top and bottom as you draw closer to them; there’s even a cheeky escort mission in there that doesn’t outstay its welcome — in fact, I adored it. Many of these things have been done before but the magic is in the way Terry Cavanagh has cleverly taken them far beyond what we’re familiar with and in many cases I’d argue that he’s taken them to their most extreme and logical conclusions. Where do you go from 11? 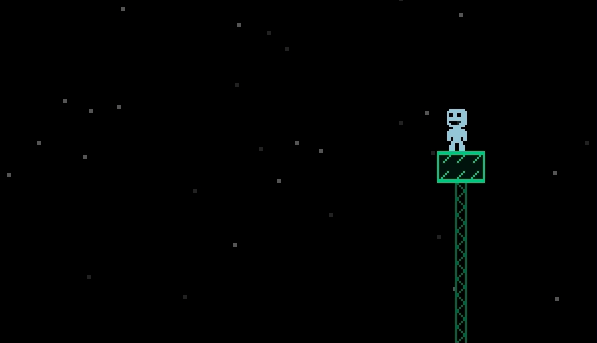 This is to mention nothing of the low-fi presentation. Though reminiscent of games from the Commodore 64 and Sinclair Spectrum days — with their garish colour palettes, eccentric enemy graphics, choppy animations, thin pops, clicks and bleeps (sometimes vaguely resembling music) — VVVVVV is a modern take on the cassette driven curios of yesteryear. It’s bright and colourful but reigned in and composed. The sparse overworld often has a certain minimalistic beauty to it akin to the planets Phoebus and Zebes from Exile and Super Metroid respectively. There are even quirky names for each screen, harking back to Jet Set Willy and Manic Miner. VVVVVV wears its influences on its sleeves but maintains its own charming identity thanks in no small part to its defining flipping mechanic and the effortlessly loveable characters and their brief but snappy dialogue. It’s remarkable just how much personality they have considering they all look identical (bar their colour) and share the same two binary (but adorable) expressions. 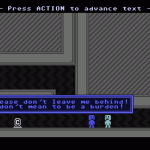 See that face? Totally not a burden.

Then there’s PPPPPP, the soundtrack by Magnus ‘SoulEye’ Pålsson, which has flat-out refused to leave the collection of CDs residing in my car ever since I bought it. Whether it’s the hopeful jauntiness of Pushing Onwards; the hypnotic, rising and tumbling grooves of Potential for Anything (my favourite); the propulsive force of Pressure Cooker or the mysterious, undulating thump of Predestined Fate, PPPPPP is utterly irresistible and a real tonic during those troublesome, seemingly hopeless spots. These barely three minute looping wonders, aside from staying firmly lodged in your head days afterwards, just don’t get old; for example, I was still dancing after forty-five minutes trying to crack the hallowed Veni Vidi Vici — a challenge you don’t necessarily have to do — by which point I should have been launching my Sony Bravia through the nearest window.

It’s also worth mentioning that my girlfriend pretty much banned me from playing VVVVVV without her after she stumbled across me trying to get the trinket in Edge Games. She was an avid spectator till the very end and loves the soundtrack just as much as I do.

I spent new years eve in 2010 with some friends I hadn’t seen in a while, drinking, eating pie and playing dice and card games that I’d never heard of before. A splendid time was had by all. In passing I mentioned VVVVVV while we were in the throes of Perudo and, to my surprise, one of my friends said that he’d met Terry Cavanagh at an indie games gathering in Cambridge (which is incidentally where they both live). After shamelessly high fiving the hand he’d shaken Terry’s with I was pleased to hear that Cavanagh referred to VVVVVV simply as ‘V’. What a fucking relief. If I’m not missing a couple of Vs every time I say it, I’m overshooting. The thing about the title ‘VVVVVV’ is that it’s absolutely perfect for the game, despite being a bastard to say in its entirety. Does it correspond to the rows and rows of spikes awaiting our 8-bit hero? Or perhaps the way in which he zig-zags about the world? Or maybe it’s to do with the names of all six characters beginning with ‘V’? Or even the way in which Veni Vidi Vici effectively has to be overcome twice? I don’t know, but one things for sure: it’s not as daft a title as it sounds. 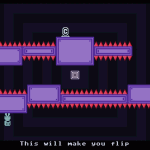 The art of wrapping.

VVVVVV is like a fine pizza Margherita or some delicious vanilla ice cream: it’s pure and simple, but not going to be to everybody’s tastes. Some will want more from their platforming; more play mechanics, more pick-ups, a more fleshed out story, possibly with flashier graphics while others, myself included, will be won over by its charm and economy, that is, how it does so much with so little. Some will shirk from its many challenges while others will seek the thrill of overcoming them. The question is: how do you know if you’re one of these ‘others’? You play the demo right here from the comfort of your browser.

You can buy VVVVVV direct from thelettervsixtim.es for £3.26 (about $5). The soundtrack can also be bought directly from SoulEye for $4 or more depending on how much you love it.