Rhiannon: Curse of the Four Branches is an unusual, beautifully written game that offers an entertaining, challenging visit to the folklore and legends of Wales. With only a few rough edges, Arberth Studios, a first-time developer, has brought us a long and wonderful game that comes highly recommended.

“Can You Help Us? You Must Stay!” –  Ghostly Message

Your good friends have purchased “a magnificently situated small holding” in the Welsh countryside. The farm, Ty Pryderi, has been there quite a while and is currently getting some much needed work done. Unfortunately, the 15 year old daughter, Rhiannon, is not adjusting well. She is hearing noises, seeing strange things, receiving odd messages. All in all, she’s quite frightened, and her parents decide a break away from Ty Pryderi is needed. You volunteer to house sit and maybe poke about a bit – quite a bit, as it turns out! 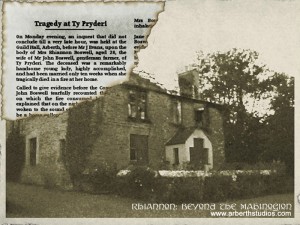 Rhiannon is a first person POV point-and-click adventure. It installs completely from one DVD, playing without the DVD in the drive. System specs follow the review. It played very nicely on my Vista system, full 16:9 screen, 1024/768 resolution, on my 24″ monitor. The game manual is in a folder installed on the Hard Drive.

The opening scene is compellingly done, with a blanket of leaves; birds and thunder in the background. It sets the stage for an unusual, even unique, in many ways, “haunted house” mystery.

Within a scene, your mouse pointer shows possible directions you may move to the next static scene. Also clearly shown are objects with which you may interact. Occasionally, you’ll come across a small set of rotating gears which will usually indicate the need to bring down an Inventory item to that location – to start a fire, for example. There are, unfortunately, no persons with whom to converse. Indeed, Rhiannon is quite a lonely, even quiet game, without the benefit of orally done self-reflection, which would have been welcomed.

Using a chapter approach to help deliniate progress and episodes, Rhiannon reveals its narrative in a progressive and logical fashion. You need to perform a few simple tasks, solve a few basic puzzles in order to light the lights and get the house functioning. This introduces you to the excellent Inventory system which will only include items needed soon. So, for example, you may see and even examine a badge or crayons, even a tree map, but not yet be able to include those in the Inventory. Remember them, though, since you may well have occasion to go back and pick them up! Since there are 200+ potential Inventory items, this kind of discrimination is very helpful.

As you explore, you’ll have a lot of reading to do. Since there’s no one to talk to, you do have time on your hands. Some of this is required, some optional, but all is informative and interesting. You’ll learn a lot, not only about Welsh legends and family histories, but also plants and trees. You’ll even become acquainted with the Ogam language. 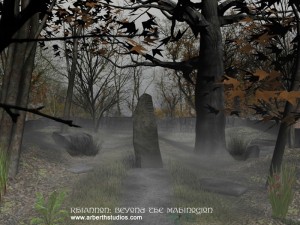 Of course, there are many puzzles along the way, almost all of them Inventory based and sensible within the context of the game and current situation. There are symbol and sound combinations, as well as scavenger hunts, with several of the exercises being real mind-benders, at least for this old guy. Of course, you can’t die, but there will be times you’ll want to use one of those 100 save slots.

Earlier, I mentioned a couple of “rough edges.” Having just come off the visually stunning but gameplay weak Nikopol, I initially found Rhiannon graphically disappointing. However, some fine qualities are nevertheless shown, including good but not overly cluttered room detail, a nice flashlight (torch) effect, and very well done cut-scenes and ghostly messages. Particularly for a first time developer, with such a fine story, relatively dated graphics are easily overlooked.

What was more difficult to accommodate to, though, was the movement scheme from scene to scene. Lack of rotation or panning within a scene, coupled with sometimes awkward transition to another scene, often led to disorientation, frustration and, literally, getting lost – perhaps even just a few steps from a desired location. I recall being almost literally on top of a fireplace in Rhiannon’s bedroom, knowing I needed to get to it, but unable to find the right combination of arrows and clicks to accomplish that task. Too much time in the game was spent backtracking, side stepping and figuring out how to get to a place I could see just ahead.

“Surely I Couldn’t Have Imagined It All” – Rhiannon’s Diary

Despite the aforementioned concerns – navigation, graphics, lack of self-reflection – Rhiannon: Curse of the Four Branches is a very fine game and one I would encourage adventure game lovers to play. The milieu of Welsh legends is unusual within a game, and offers information we don’t often see. The overall story is intriguing, complex and detailed, with excellent writing. Progression is logical, with thoughtful transitional clues and sensible, though often quite hard, puzzles. When reviewing a game, I look at length of play, and was surprised that I’d spent 25 hours. It was fun, challenging, fascinating, with time flying by.

Arberth Studios is to be commended for this fine debut.