I swapped Ikaruga for Mario Kart: Double Dash!!. There. I said it. And here’s another thing: I had more fun with Double Dash!! than Ikaruga, despite the Treasure shoot ’em up being a thing of beauty. So what made me swap it? Because as much as I love an indiscriminately difficult game I wimped out. I couldn’t do it. I didn’t have the patience to learn the bullet patterns or have the perseverance to wield the elegant polarity switching. It tested me more than any other game I’ve ever played, and I failed.

Every valiant attempt I made was met with death, sometimes born out of complacency but mostly out of fledgling incompetence. I’ve played vertical and horizontal shoot ’em ups before, some more difficult than others with varying levels of success – and I enjoyed them – but I couldn’t get a footing with Ikaruga; I couldn’t scale the first incline of the game’s brutal learning curve; a learning curve that rose before me like Mount Doom. Mount Doom with an unflinching smiley atop.

With most games I traditionally crank the difficulty up as high as it will go and then lower it according to my threshold, providing the game permits it mid-game. Failing that, I’ll brave the highest difficulty and be prepared to start afresh, should things go awry. This way I can find a sweet spot that allows some modicum of progress without sacrificing a good challenge. The problem is that on occasions the stubborn bastard in me simply won’t lower the difficulty and will fight tooth and nail to rise to the challenge. I can’t allow a bloody game to beat me. Nu-uh.

I’ve reduced my fingers to wobbly hot dogs completing F-Zero GX‘s story mode on very hard, later winning most of the cups on master difficulty. I’ve ran hell for leather as a marine shooting anything penis shaped in Rebellion’s original Alien versus Predator, eventually managing to complete it on the the director’s cut difficulty. The ultimate test was trying to complete levels that were (unknown to me at the time) actually impossible in Paul Eres’s Immortal Defense. Had I turned the difficulty down a bit I would have been on my merry way. But no. No fucking way.

The thing is, Ikaruga‘s difficulty hadn’t been cranked up, the lives count certainly had, and there’s a fair chance that continues had been enabled as well, but it was still making a fool of me. There was no margin for error and when that error came in two head-splitting varieties (blue and red), and from every possible angle, that error well and truly got its way with me.

Of course this is all standard fare for the hardcore shoot ’em up and I was just a big wuss who couldn’t be arsed to memorise Treasure’s own polarised flavour of bullet hell, but for the record, I thought Ikaruga was brilliant and pure. It marks the point at which the stubborn bastard in me was told to sit down and stop crying, and of course my natural reaction was to swap the little coaster of misery for something softer and more cuddly, in this case the rather clumsy Double Dash!!. I mean, look at it. You can’t even end a sentence tidily with those damn exclamation marks.

Anyway, where the bullet hell am I going with this? 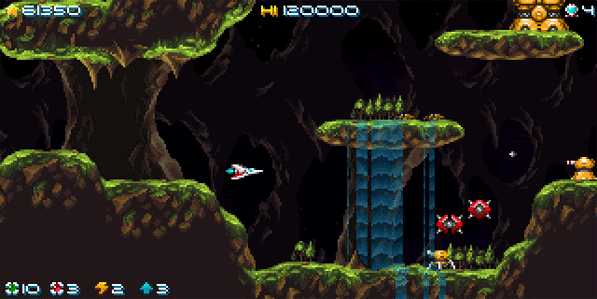 Well not so long ago I came across a horizontal shoot ’em up called Hydorah by Spanish independent developer Locomalito and while it’s certainly nowhere near as difficult as Ikaruga, it still has that same eye-gougingly-difficult streak running through it. There are no difficulty settings or continue allowances to speak of, just one tough mode and a handful of lives. The main concession Hydorah makes for the girly man in me, is that it gives the player a single save slot that they can only use three times and only after finishing a level. This is both a blessing and a curse. Do you forfeit a save to reduce the risk of having to start from scratch or do you gamble your remaining lives attempting to crack a level so that you can save one step closer to the end? It’s a great little system that allows you to rehearse those troublesome levels without having to laboriously spend more time getting back there after each game over. The wider idea is that as you push forward and your saves begin to dwindle, there is still the tension associated with losing your hard earned progress but without the soul crushing realisation that you will have to do it all again.

When you begin Hydorah you’ll notice that the game takes place across a map with a single path that splits into two and joins together again at certain intervals. Where the path splits, the player is given a choice – albeit a limited one – on which route to take. Along the paths there are spots which represent the various levels. Before each level you equip your ship with a primary, secondary and power weapon, and as you complete more levels extra weapons are awarded, slowly giving you some freedom to establish your own play-style. The ability to load out your ship as you accumulate more weaponry means that each level can pan out quite differently depending on your choices. 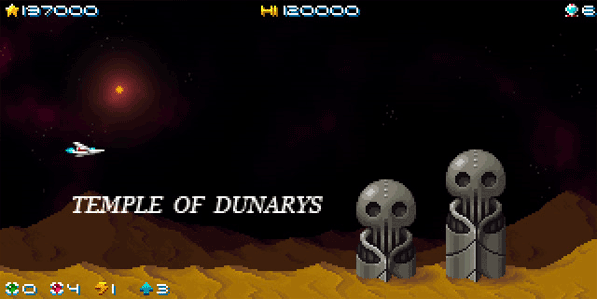 During the levels there are a number of power-ups which appear after destroying certain enemies. The main power-ups alternate between two colour states which determine what will be upgraded, so for instance, blue will upgrade your ship’s speed while orange provides you with ammo for your power weapon. Primary and secondary weapon power-ups work in the same way with a colour state determining what gets upgraded.

I personally found power weapon ammo to be more valuable than speed upgrades because not only did my ship become way too sensitive, frequently careering me into cosmic space furniture, the special weapon was indispensable for taking out bosses as quickly as possible. It only takes a single collision to destroy your fragile ship (unless you pick up a shield power-up) and with each death your weapons and speed are incrementally degraded, so self-preservation goes a long way in tackling the various bosses at full strength, not least the levels themselves. I’ll make no bones about it, the learning curve in Hydorah is steep but it is no insurmountable cliff-face, and coupling that with the various allowances the game makes such as the three saves, the (limited) level selection and the (initially limited) ship load-outs, Hydorah isn’t so keen to push you away. 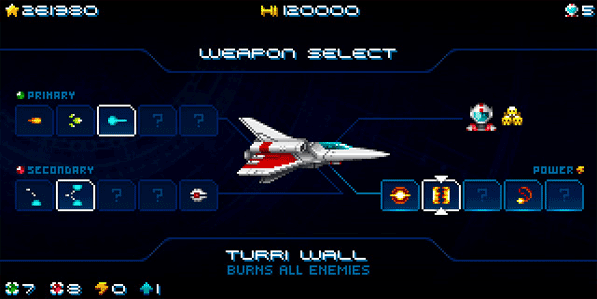 Turri Wall is a power weapon straight out of Turrican. Hence the name.

On the aesthetic front, Hydorah looks and sounds fantastic. It’s unashamedly retro and perfectly captures the 80’s spirit of old classics like R-Type, Turrican and Gradius. Even the occasionally botched translation and questionable acting in Hydorah (both of which seem unintentional), sit comfortably beside the broken Engrish found in some of the source material that inspires it.

“Take the controls of your ship and prepare to die!”

Admittedly, I haven’t got very far with Hydorah, hovering around the level 4-5 mark (level 4 is a sod), but of what I’ve played it’s clearly a labour of love. The fact that the entire game – which also comes bundled with the original soundtrack – is free, only underlines this. If you’re a former 80’s arcade junkie looking to relive some of the magic or a shoot ’em up veteran looking for a quick diversion, or even just an interested passer-by, then you really ought to check this out. If you’re none of these, then here’s a video which will play all by itself and everything.

And in it, they will Stalk.