E3 is officially upon us. No, I’m not there, but the beauty of the internet means that for another year, Los Angeles can come to me. Which is handy, as I’ve been to Los Angeles before and frankly don’t care much for going back.

First out of the blocks is Microsoft, who this evening laid their cards on the table with one or two major hardware announcements. Having stolen the attention at many an E3 in recent years with their keynote’s (who could forget last years nerd rage inducing Final Fantasy XIII theft from those pesky Playstation fanboys?), Microsoft will have been keen to set a firm pace for the industry to follow over the next few days.

Let’s face it, the presence of a newer, slimmer, hopefully-less-prone-to-imploding Xbox 360 was always going to be on the cards this year. The Playstation 3 re-design did wonders for it’s sales in the latter part of 2009, and although not quite a given on the same scale as last years announcement from Sony, the omens have pointed to a refresh of the Xbox hardware for a while. Well, the omens and those slimmer motherboard leaks from a couple of months ago.

So what have we got? Well without the new console being released yet, and without being at E3 to receive a free unit just from being in the audience, I’m not currently in a position to give a full hands on report. What we can safely say is that it’s smaller. How much smaller? Microsoft were able to conceal the re-designed Xbox underneath the naked shell of an Old Skool 360 unit for the duration of their keynote. So yeah, it’s smaller alright. The curvy lines of the existing design are out at the expense of a sharper looking frame, as is the matte finish in favor of a new, finger print friendly glossy case; reversing a trend that Sony took last year with the release of the PS3 Slim. New to the party are also a touch sensitive power button and a grill on the side that suggests a more sensible approach to cooling the system. You’ll probably see this comparison banded around quite casually by many, but the new Xbox 360 re-design isn’t too dissimilar to something you might see from Alienware and their gaming PC/Laptops. 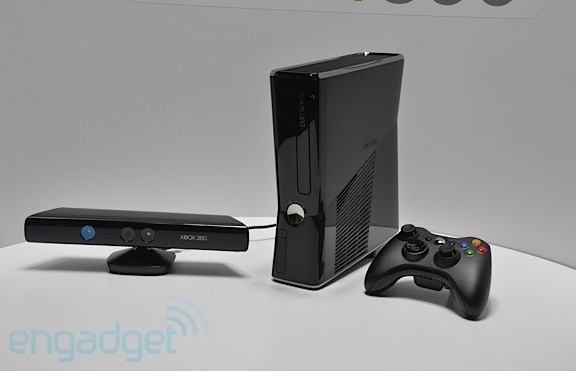 Let’s face it though, it’s not because of design why anybody should be interested in investing in or upgrading to a new model of the Xbox 360. This could represent an opportunity for Microsoft to correct some of the (many) wrongs from the initial launch hardware and almost all revisions since, which have been plagued by the dreaded Red Ring of Death. With a reputation for sounding like a jet engine whilst powered up and lacking some pretty standard features when compared to the Playstation 3, Microsoft have had work to do.

The good news is is that some of these problems do appear to have been solved. The new system was described as “whisper quiet” during the keynote and also brings built in 802.11n WiFi support to the table. Approximately 5 years too late, but rather late than never as they say. I’m sure it will take a detailed run through of the systems internals and a proper sound test to really get a feel for how much work Microsoft have put in here, but the early signs and promises are encouraging. For many gamers with older Xbox 360 units or those previously put off by the dangers of receiving a Red Ring, the promise of a better internal structure and a quieter running experience may be the hard sell in themselves.

New ports, you say? Suit you, sir. There’s 5 USB ports, HDMI, a new fangled socket for the new motion controller and an optical audio out port; At long bloody last. The console will also ship in black by default, with no word currently on alternative colors, and will ship with a 250GB HDD as standard. It doesn’t appear however that any of the previous Hard Drive accessories will be cross compatible, but a removable slot at the base of the unit suggests a PS3 style option to fit your own drives may be possible. On the plus side, this could put an end to Microsoft’s hideous pricing strategy for storage space, whilst opening up the 360 to a more versatile option.

The new Xbox 360 – which doesn’t have an official title to call it’s own – will cost $299 in the USA, entering at the same price point as the existing Elite models. It’s on it’s way to stores now and should start appearing at retail within a week. For Europe? We can’t get our hands on the slimmer model until July 16 2010, although like America we will see this at the same price point as the current Elite models at £199.

Interestingly, Microsoft currently appear to be taking a similar line to that of Sony last year. Production of the original style units looks all set to cease as of this point. Once the current/old units are gone, they’re gone folks.

Of course, hardware news was never going to stop with simply a re-design of the console itself. Officially unveiled and re-badged at it’s own event earlier in the show, but stopping by to take up a huge chunk of the main Microsoft keynote later on, Kinect is of course Microsoft’s entry into the world of motion controllers. Personally, I think the decision to go back on what little product awareness Microsoft had achieved with Natal at this stage is a mistake, especially when I’m finding the name Kinect so difficult to warm to. Intentionally typing the word Kinect to talk about what has been known for at least a year now to be Natal is a challenge unto itself. Alas, this isn’t exactly an issue in the wider scale and you may have your own thoughts on that. Regardless, you can bet your bottom dollar that Microsoft are going to be putting a huge marketing budget behind this thing in the run up to the holidays. If you don’t know what this is all about now, you will within a matter of weeks and months. 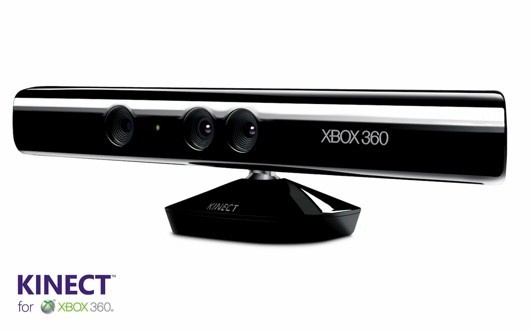 Described in the most basic, possibly even patronising way, Kinect is Microsoft’s answer to the same audience of casual gamers and Grandma’s that the Wii established several years ago. Taking the form of a camera, the idea is that Kinect disposes of the necessity for a controller at all, instead placing you and the flexibility of your limbs as the only input into the console. Microsoft chose to show off a sample of the 15 games available for launch, although those weary of dancing and exercise after 3 years of the Nintendo Wii may wish to look away.

To be fair, without playing any of the games demonstrated, it would be cyncial for me to sit here and criticise too harshly, so I’ll let you venture out into the wild, watch some footage yourselves and make up your own minds. However, with game titles as diverse as Dance Central, Your Shape: Fitness Evolved, Kinect Sports and Kinectimals, this may be a decision you can come to without seeing anything. Infact, Your Shape: Fitness Evolved sounds like a hysterical piss take of Halo: Combat Evolved.. one that I had to read twice over to check I’d got the name right. Fitness Evolved? Please. And “My Shape” is round, for what it’s worth. It won’t be evolving anytime soon, either.

With representatives from Treyarch and gaming luminaries such as Peter Molyneux, Cliff Bleszinski and Hideo Kojima taking to Microsoft’s stage during the course of the keynote, it would have been nice to see the technology put to some intelligent use in an established “core” franchise. No such luck. A reported (but as of yet unofficial) $149 for what appears to amount to little other than more exercise and dancing equipment is a deal I can certainly wait on. At least until the likes of Molyneux and Kojima prove the technology – which has undeniable potential – can be put to genuine use in games the majority of the Xbox 360’s core audience will want to play.

A small feature of Nat.. Kinect (there I go again.. seriously Microsoft, start promoting this thing quick!) that did perk my interest was a new UI for the Xbox 360 dashboard. Although similar to the New Xbox Experience currently adorning our consoles, the new system appears to drop the cover flow style in favor of a more flat and clean cut design. Using Kinect to control the UI, gamers can now interact with their consoles using just their own bodies. Voice prompts can be used to issue commands to the 360, whilst users can navigate around the dashboard simply by gesturing towards the camera. You can even log in to your profile by waving at your on screen avatar. It’s all a rather cutesy vision of Minority Report, but for me stood out as one of the more interesting features of today’s Kinect presentation. Which probably says alot, actually.

The heavy focus on Kinect and it’s software made up a disappointing but unsurprisingly large part of Microsoft’s E3 keynote today, and the result was a distinct lack of focus on what traditional gamers may call the “core” aspects of the Xbox 360.

All was not lost, however. Call of Duty: Black Ops certainly looked interesting, if you’re still interested in Call of Duty games, whilst we also got our first taste of Metal Gear Solid: Rising gameplay footage, showing a surprisingly gruesome (but undeniably awesome) montage of the ever unpopular Raiden slicing some generic soldiers into multiple pieces in slow motion. Soldiers and a water melon. Never forget the melon. Cliff Bleszinski was also on hand to show us some more of Gears of War 3, which looks exactly the same as the previous 2 games but bigger (not necessarily a bad thing, in context) and Peter Molyneux showed off some more Fable III tidbits. Something about reclaiming a kingdom from your evil brother or something. I think I may have been picking my nose at this point.

Of course, this is just a (relatively) brief run down of Microsoft’s event, and you can find a more detailed report of the full show from the usual channels. However, with Kinect set to divide opinion and a new console sure to re-ignite interest in the Xbox 360, the ball is in Sony and Nintendo’s court to impress. Particularly I feel for Sony, who may have to produce more than exercise and dance simulations if their own Move technology is to impress on the show floor’s tomorrow.

12 Responses to E3 2010: A Change of Name, A Diet and Lots of Dancing; It’s the Microsoft Keynote