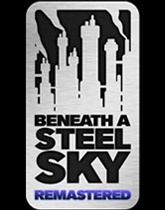 Available for: iPhone and iPod Touch

Revolution Software really have set a precedent on the iPhone for adventures games.  Beneath A Steel Sky: Remastered has a wonderful control scheme, fantastic dialogue, challenging puzzles and all for a fabulous  price tag.  Anyone who owns an iPhone who doesn’t own this game, is someone not worth talking to…

It’s been quite some time since I played a point and click adventure game. Broken Sword was the last (again by Revolution Software), which by my estimations makes it around a fourteen year break. So I find it quite surprising then that I have actually purchased another, and not a new game, but one which was originally released in 1994.

When myself, Gregg, and our Mum used to sit down to play Beneath A Steel Sky (BASS) on the Amiga, the game was on over 12 floppy-disks.  Often, after the numerous disk changes and exhausting loading screens, before the game had even started, my Mum would have fallen asleep through sheer lethargy at the sound of the Amiga chirping and clunking away.  While we (myself and Gregg) never finished the Amiga version; a culmination of wanting to ensure our Mum played it with us and its difficulty.  I have always had a fondness for the game however, and in part I suspect games and films such as BASS and Blade Runner were the catalyst for mine and Gregg’s love of stories that paint a picture of a bleak future.

Thankfully times have changed significantly, and floppy-disks and long loading times are now a thing of the past.  A quick search on the App store and you will be struck by the fact that the game is only £1.79.  That’s right, £1.79 for a re-mastered original classic which according to the developers “boasts of over ten hours of narrative puzzles”.  It would be hard for many to say no to such a price and a tragedy if they do.  It’s a steel after all (sorry).

You will need a Wi-Fi connection to install BASS, as the game is over 350MB, however the installation is entirely pain free once your connected.  Played in portrait mode, the menu is clean, crisp and responsive.  Still terribly voice-acted, the cut-scenes have thankfully had a visual face lift, with vibrant new animated scenes added from Dave Gibbons (famed for Watchmen).  As the story unfolds (I won’t spoil it here) you find yourself taken from “the Gap”, to return back to Union City.  The game begins with Security Services trying to track you down as you make your escape.

BASS as a result of the iPhone’s touch interface adopts a less conventional exploration method.  You can touch anywhere on the screen to move, while large gray arrows that highlight accessible routes off screen appear should you tap near them.  Objects of interest which can be interacted with are highlighted by an animated blue ring when you tap in their vicinity, and by selecting the blue ring directly it will give you the option to use, or examine (displayed as the image of an eye, or a set of cogs). Talking to characters within the game is much the same as interacting with other objects; tapping a character will highlight a pair of lips above their head, that can then be selected to begin a conversation. 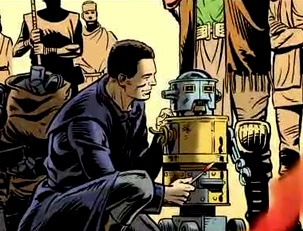 Opening your inventory from the chest in the bottom left hand corner, allows you to tap an object once to examine what you are holding, or holding down on the item will allow you to drag it onto the screen to interact with another object of your choosing.  Dragging one item onto another within your inventory may result in both becoming something new.  Its all simple and highly effective, and prevents those moments of years gone by pixel hunting.  At first though it can all seem very fiddly using your finger, instead of the pinpoint accuracy of a mouse cursor, however after several minutes you’ll soon realise how perfect it actually is, and wonder why more Revolution Software games aren’t on the iPhone.

The re-mastered audio tracks, musically and vocally, are of high quality considering the age of the original recordings, and particularly good for a hand held device; it certainly benefits from using headphones.  The entire game being voice acted is also a pleasant surprise and wasn’t part of the game when I first played all those many years ago. The dialogue, like many adventure games is often sarcastic and witty, but with some great humor.  It can also be skipped should you read quickly.  Lamb is a particularly fantastic character, and I challenge anyone to not smile at him, or attempt to impersonate his northern accent.

In terms of the puzzles, I still found them tricky.  Like all adventure games, the puzzles are often painfully simple in design, yet challenging enough to justify the ten hour play time.  I make no boasts of being good at adventure games, so others may find the game easy; it would be hard for me to quantify.  One particular puzzle did have me vexed for quite some time though.

Revolution Software have added a context sensitive hint system indicated by a large blue question-mark in the upper right hand corner of the screen.  Dependent on the puzzle you are to undertake, it will give you several small hints in succession to lead you to its conclusion- so you can get as much or as little help as you need.    Shamefully I did have to use one hint throughout the game, and I fear if I hadn’t my iPhone would have gone through the window.  No doubt like many others, I was very grateful for this addition, as I would have only looked on the internet anyway, and because of the nature of its hints I never felt too guilty. 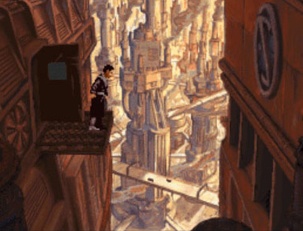 What also sets BASS apart is the interaction between you and your robot sidekick Joey, who trundles behind you at all times.  Unlike other adventure games which are often solitary affairs, speaking to, and interacting with Joey can and will often help in many puzzles throughout the game.  It can at times however feel like painting by numbers.  Exhausting every conversation tree with every character is often the answer to far too many puzzles.

Despite the story not being hugely in-depth, it is enjoyable, but can often be forgotten due to the stop start nature of handheld play.  Pausing the game to continue at a later date as you get off the bus, or return to work from your lunch break can leave you wondering what puzzle you were on, should you pick up the game several days later.  However, the hint system is always there to give a guiding hand if you can’t remember what your supposed to be doing. An in game diary of the story-so-far would have been much appreciated though.

After completing BASS, the game took me a little over eleven hours to complete, which for £1.79 is bloody good value.  I thoroughly enjoyed the game from start to finish, with the graphics and animations a particular draw (they are still very impressive) and despite several puzzles causing problems, I didn’t think the game was actually difficult enough.

Revolution Software really have set a precedent on the iPhone for adventures games, and it is certainly a market which the device could excel in, and one which deserves to be exploited.  The tap function to move, and investigate is a dream to use, and I hear has been put to equally brilliant use in Broken Sword: Directors Cut which has finally arrived at the App Store.  With the added extra’s (including a new concluding cutscene that hints at a sequel), the ability to play the game on the move, and for the handsome price tag of £1.79 (including a pain free, PC free installation process) anyone who owns an iPhone who doesn’t own this game is someone not worth talking to.  Well, maybe.

You can view the opening footage of Beneath A Steel Sky: Remastered, including the first puzzle here

19 Responses to Beneath A Steel Sky: Remastered