I’m as guilty as the next fan of speculating unfairly about things, though I’ve tried – hard – to withhold judgment on Eidos Montreal’s upcoming Thief. It hasn’t been easy, and I haven’t been wholly successful. But I remind myself that this studio also gave us the workmanlike but excellent Deus Ex: Human Revolution,  and I feel a little better. “Teams” and “studios” aren’t the same thing, though, and so far there’s been little evidence that the development team behind Thief understands the franchise they’re working with to the degree that the Deus Ex folks understood theirs.

It’s this latest story trailer that made me think it was time to put in my totally unsolicited and almost surely unwelcome two cents.

That narrator? The one who implies that you know him? You know him. If you played The Dark Project or The Metal Age, that is; the two Thief games that created the canon and delivered on it most effectively.

Not exactly a “major” character, to be sure. He’s a friend of Garrett’s, to the extent that Garrett has friends. Sort of an all-around loser. Having been imprisoned by the Hammers, he’s a secondary objective in The Dark Project’s “Cragscleft Prison” mission: it might be nice to bust him out, Garrett thinks, since he has to visit the prison anyway and since he’s been hoping to make sexytimes with Basso’s sister. Always easier to make sexytimes when you’ve freed someone’s brother from prison (though if I recall correctly, you accomplish this by hauling his unconscious body to an underground river and dumping it in, leaving it to float to freedom on its own). In The Metal Age, Basso is sort of the focus of the first mission – he’s fallen in love with the laundry girl in some rich lady’s employ and needs Garrett to help spirit her out of indentured servitude and into his waiting arms. 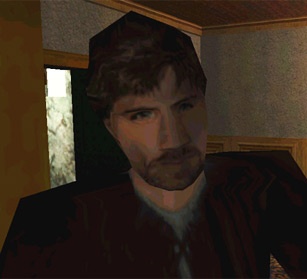 Basso the Boxman has a purpose in the Thief games: he exists to demonstrate that Garrett does have a social circle, that the master thief is a human being and will go out of his way for people he cares about, that he’ll appear to do it grudgingly but really he doesn’t mind at all. I always found this to be an important part of Thief’s mythology.

So now it looks like Basso has moved up a little, which seems to happen with criminals of his nature. They’re never the best and hardly the brightest, but they cultivate friends and find themselves abruptly in positions of power. Sometimes they remember where they came from and sometimes they don’t. From this trailer, it sounds like Basso hasn’t forgotten his roots. That’s not the problem.

The problem is that using the name of a secondary character from the original franchise doesn’t make this reboot a loyal follow-on. And though I really do try not to pile on with the haters who assume the worst based on little information, looking at a trailer like this concerns me. This team has gone out of its way to insist that they’re huge fans of Thief, that their goal is to update the series while remaining true to its roots. How, exactly, can that be?

They only recently abandoned the plan to have Garrett earn experience and level up, citing fan opposition even as they sounded utterly bewildered by the outcry. XP leveling is fine in concept, of course, but again it sort of flies in the face of claims that they know and love the Thief milieu. Garrett is a master thief. If this isn’t an origin story, and it isn’t, he’s already the best thief in the world. That’s kind of the point of the franchise, which – I hasten to add – is called Thief.

You probably have to be a Thief disciple to really see where the developers appear to have gone wrong, but for those people this video makes it remarkably self-evident. Whoever made the trailer (if not the game, who knows) clearly understands the basics of the City without understanding its nuance. They clearly understand that Thief  had some new vocab words without understanding how they’re used. They clearly understand the cropped animatic style of the original cutscenes, but in emulating it (badly) fail to understand why it worked. Based on the trailer it’s clear that either the team is employing the foundation of the Thief universe but reinventing as it sees fit, or doesn’t really “get” the universe of Thief at all.

Now here’s the thing. If Eidos Montreal chooses to reinvent or reimagine Thief for this fourth installment, so be it. They own it. There are a lot of reasons they might want or need to do that, and the desires of loyalist fans – the same fans so small in number that the original Thief trilogy was hardly a sales recordsetter – need not heavily influence them. What they can’t do is live comfortably in both worlds. If this is a reboot of Thief, reboot Thief. If this is a canon-loyal sequel to an existing universe, make it a canon-loyal sequel to an existing universe.

Of course, it’d help if he weren’t ghost-white everywhere else.

As a franchise, Thief has stumbled many times. It could be argued (by me) that the only really priceless game in the series was The Dark Project. Its immediate sequel The Metal Age didn’t have… didn’t have something that the first one did; the third one, Deadly Shadows, felt like a Thief game, and played like a Thief game, but somehow wasn’t a Thief game at all. In the long run, I suspect that’s what this fourth installment will amount to as well.

I love that the developers paid enough attention to Thief mythology that Basso the freaking Boxman is not just a character, but a character who’s undergone a believable transformation. I hate that they’re using such out-of-hat pulls to imply their love of a franchise even when all other evidence points to a significant and ill-advised reimagining. I hate that the trailer either misuses the word Taffer or the voice talent was not directed correctly in its use.

Actually what really makes me sad is that they’ve already ignored the two major sequel setups that appeared at the end of Deadly Shadows – what the City actually is (a great reveal in an otherwise forgettable climax, and a subtle enough one that plenty of people never got it and still don’t), and Garrett’s epilogue. Randy Smith, no fool, realized it was time to end Garrett’s story and did so well, simultaneously introducing a character who was clearly supposed to be the protagonist of any “next” Thief game. I would have liked to learn more about that little girl and her adventures. She was clearly something special – after all, it is no easy thing to see a Keeper when he does not wish to be seen.

For me, it’s been so long since a Thief game, and so much has changed since, that I’m not wildly fussed about this. I’ll buy the game unless the reviews are hideous, and with luck I’ll enjoy it. I’d certainly rather it be good than bad, faithful than un-. But I also tend to believe that Thief belongs in another time, and that time is past. Ironically, the tagline for this installment is What’s yours is mine. Pretty good, I like it. But cynically, isn’t it more a commentary on this game’s relationship to the Thief of old than it is on what Garrett does with other people’s things?

Commiserate with Steerpike about the absence of Stupid Guard via email.

37 Responses to Can You Steal A Franchise Back to Health?