Massively multiplayer online role-playing games are all the rage now-a-days.  But here comes one that threatens to change the world of MMORPG gaming?  …so say the producers, at least.  Supposedly a big hit in Asia for the past few years, Aion will soon be dumped, if it hasn’t been already, onto servers in the U.S.  Word on the street is that there have been over 300,000 pre-release orders placed in Europe alone. 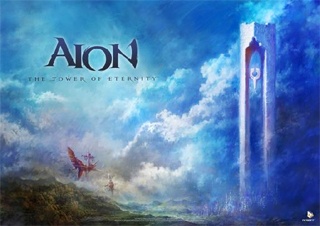 One thing is certain, it is massive, with over 1,500 story driven, action-packed adventures for you to experience.  That is, if you like stunning graphics,  the challenge of a multiplayer game, roleplaying, and the idea of starting as a normal but highly talented human who ascends to become a God; well, you will most likely love Aion.  Of course, it ain’t all cotton candy and life won’t be that easy in these heavens unless you have not made the connection yet… all the other online players are also Gods, and they want to hurt you as much as you want to hurt them.  You are probably thinking, so what’s new?  It sounds fairly normal so far.

Because the game occurs in the heavens, in the land of Atreia, a world sundered into two halves, with an Abyss between them, it provides sort of an interesting twist that is only a tiny bit different from the online games you might be used to…an attack can come from any direction.  Whether the makers like it or not, there can be little doubt that Aion has got to be based, at least in some small measure, on World of Warcraft.  But you shouldn’t use that thought to judge the game.  This is not a WoW ripoff! NCSoft has attempted to use out-of-the-box thinking and have created a game that is indeed, sorta borderline out-of-the-box.  That is not to say the game isn’t fun to play, it is unique and tickles the gamer’s visual sense and uses MMORPG to its max as a tactic to appeal to WoW fans while, NCSoft hopes, it also is a better game.

It is a whole universe, and to the creator’s credit, you will find a few new, magical creatures and, interestingly enough, some rather fascinating twists that may even give you a chuckle. 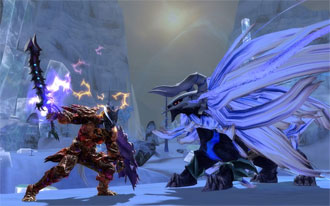 So, what’s it all about, Alfie?

The basic premise of Aion is rather interesting in that there are opposing factions, but unlike most gameplay, these are societies that grew apart after their original, but beautiful world of Atreia was broken apart.  As a result, neither is really evil, but they both believe the other is evil… so evil, indeed, that they need to be completely destroyed.   Sound good?  Sound normal?  Does it even sound new?

Naturally, to make it truly exciting (I mean how much fun can it be for two societies to just try to eliminate one another) there is a third enemy.  Fortunately, it is a common enemy, a group of “fallen dragons” who are blamed for starting the war between these two societies.  After all, doesn’t every game really have to have its own dragons?  And if not, wouldn’t every game benefit from fallen dragons? I mean come on.

Well, for one thing, you can fly–but with your own wings.  You are not provided this benefit merely for existing, you do have to reach a given level to be awarded the privilege.   Unlike WoW, one doesn’t need a trusty horse, or any other critter for that matter, to take flight. Flight is an integral part of the Aion gaming experience and integrated throughout the gamespace; after all, it does occur in a heavenly world with a giant abyss between the two protagonists… the good guys and the good guys…or if you prefer, the bad guys and the bad guys.  Which is which, well, that really depends on which of the two worlds you happen to call home.

How about Character Creation? 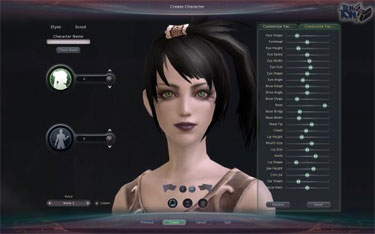 This is an area in which NCSoft may have outdone themselves.  There is an enormous amount of flexibility built into character creation.  That flexibility allows the player to create characters that will turn him on, and I don’t mean that in an Age of Conan sense.  Creativity here can make the player giggle and in some cases, laugh out loud while creating a good bit of murder and mayhem as the play puts the characters to use.  The character creation and crafting system allows you to create characters in innumerable ways, customizing to your hearts content.  Some may find it as much fun to create their characters as it is to play the game. This might be the character generation system that finally unseats City of Heroes in terms of pure cool, though Real Time Worlds’ upcoming APB will probably take the throne soon enough.

Although being judgmental is always a risk, the graphics and visuals in Aion are truly outstanding.  As far as movement and control of the characters and events, you get the feeling that you’re in control, a good thing when playing a computer game, since there is response to your actions.  But it’s real strength is that the player may independently create storylines; and in addition, you may find yourself facing both player and non-player opponents. In some ways this is reminiscent of Eskil Steenberg’s upcoming and unproven Love, a game in which the players will supposedly dictate the evolution of the world; or the soon-defunct Archlord, in which specific dominant players were given immense control over the game environment as a reward. Whether it’ll work is unclear; Love looks better as an art project than a game, and Archlord, well, Archlord won’t be with us much longer. So Aion will have to prove itself in this regard.

Blizzard’s success with World of Warcraft is so total, so runaway, that analysts consistently remove it from their calculations, because it skews results to such a degree that they’re no longer applicable to a given question. Quite literally, WoW is so huge that we can’t see it any more. It dwarfs everything else on the landscape to that degree, if you can believe it.

All Blizzard really did was cause the generational leap from Gen-2 MMOs, like Everquest, to Gen-3 MMOs. And they did it – I’m betting – by sitting down and toting up everything wrong with MMOs, then creating a game that fixed them all. Here’s the thing: no one will ever “beat” WoW by following its own strategy. The next dominator of the MMO space will be the game that iterates on WoW, that totes up everything it and its generation did wrong, and fixing that. The instant a game calls itself a “WoW-killer,” I tend to tune out, because I’ve never seen a “WoW-killer” that’s not first a WoW-clone… and, later, a WoW-victim.

In the final analysis, Aion appears to have a lot going for it… but I’m not certain it’s the evolutionary leap the MMO world needs. While you may have used incredible ingenuity to create your character, and you will be playing against other player created storylines and characters, I expect a fair amount of grinding, raiding, instancing, respawning, and other common symptoms of this generation, meaning that much of its play will be cadged from World of Warcraft..  Will Aion bring a revolution in MMORPG gaming? Or will it suffer the same indignity as Age of Conan and Warhammer Online – big box sales and high initial numbers (and server crashes and outages during the first month), followed by sharply dwindling attendance and relegation to the dusty back-of-the-shelf of the MMO world?

Only time will tell… but as the MMO and persistent worlds grow in popularity, I can assure you of one thing: we’ve not yet seen what this amazing new technology can truly do for us.

3 Responses to Will Aion Change the World of MMORPGs?