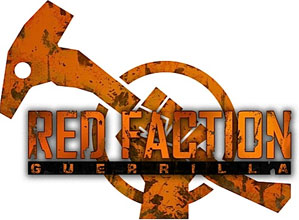 So in violation of all my intentions, I bought Red Faction: Guerrilla on Tuesday. I’d been meaning to hold off for Prototype, which looks like it’s going to be the better game, but then I thought, “Why not both? I’ll stimulate the economy a little.” And with luck I can finish Red Faction in time to trade it in for Prototype when that game comes out next week.

The Red Faction series has been around for a while, and its real differentiator has always been a technology called Geo-Mod. In the first two Red Factions, Geo-Mod allowed you to break sections of rock off. In the context of the fully destructible environment we’d been promised, it was quite a disappointment.

Guerilla’s Geo-Mod 2.0 focuses on buildings, not rocks, and it works amazingly well. As a member of an underground resistance fighting the tyranny of the Earth Defense Force government on Mars, your job is to blow shit up. And with every single building calculating its own structural integrity at all times, and then collapsing uniquely in real time according to the damage done to its load-bearers, you can do it pretty creatively. I rigged a huge cooling tower to collapse sideways onto another building, essentially destroying two for the price of one. The destruction is huge, it’s gleeful, it’s satisfying. And while I question the rebellious Red Faction’s strategy of reclaiming Mars by destroying every building on it, well, what can I say… they give the orders, I follow them. “Knock that building down,” they say, and I do.

Also, the explosions are pretty.

All in all Guerilla seems to be a solid open-world game so far, with an assortment of side-missions and several story missions scattered throughout each region. Load times are essentially nonexistent (except when you die, which you’ll do a lot), and the developers took advantage of the engine’s power to great effect. PC players willing to wait a few months will get a version that includes a dramatically enhanced lighting model, DirectX10 support, and higher resolutions.

The one complaint I have about Guerilla right now is the combat system. In general it works fine; the game lets you customize your controls to a degree and switching weapons on the fly is a breeze. But frankly it’s kind of hard to see enemies in all that red dust, and your health meter is displayed so improminently that you’ll rarely realize you’re seriously injured until you’re dead. The worst issue with combat, though, is the appallingly bad cover system. It’s essentially broken. Sometimes you stick to cover, sometimes you don’t, sometimes you pop off the cover when trying to aim, sometimes you can’t poke around it without popping off, sometimes you can’t crouch when you’re stuck to it… it’s a mess. Volition, if you’re listening, please fix it.

Volition also made Saint’s Row, so they know their way around open world games. As such the driving sequences, cash and upgrade acquisition, and other tropes of the genre are pretty well maintained in Guerilla. For sheer destructive joy, this is a potential hit despite the yawnathon story and shaky combat. Whether I return to it after Prototype, however, is anyone’s guess.