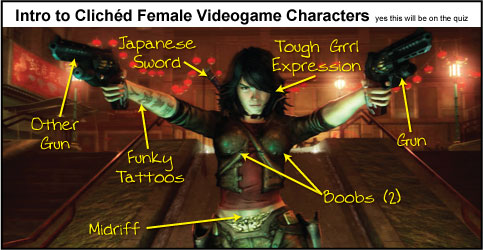 Much worthier games than A2M’s upcoming Wet have been threatened with premature death on account of the Activision/Blizzard merger that killed Sierra. In fact, some people thought Wet would toddle off into the sunset, unremembered. After all, the game has no publisher, and Activision/Blizzard CEO and super-genius complete moron Bobby Kotick has indicated that his company will only produce 10-year, $100-million franchises from now on. Wet is new IP, and that don’t qualify.

Apparently, though, A2M is still beavering away on this game (pun intended), under the not-misguided assumption that sooner or later someone will come along and publish this action platformer. Rant follows.

Wet’s website tells us that the lass pictured above is named Rubi. Her occupation is listed as “problem solver,” which I couldn’t find on salary.com. The site says that “Rubi is a working class, Jack Daniels, confident, tough, sexy, athletic, deadly fixer/problem solver.” Given the spelling of her name and the lengths to which A2M has gone to make it clear that Rubi is “just folk,” apparently hard-drinking, uneducated trailer trash is the new ideal for game characters. Gordon Freeman, your MIT education isn’t welcome here; it seems gamers want to play a character they’d like to have a beer with. And then of course there’s the overt sexualization of the character.

Hey, look, I’m a hetero dude. I get that Rubi is hot. I wouldn’t toss her out of bed for eating crackers. But honestly, in this day and age, this kind of crap is the best developers can come up with? Between Wet and other appalling entries like Bayonetta, I’m not optimistic that 2009 will change the level of sleaze, objectification, and lack of originality in the games business.

It’s not just the mistreatment of women that bothers me, though the industry should have long since moved passed its adolescence by now. It’s the fact that in addition to reducing female characters to mere masturbatory tools, it’s deleterious also to the potential of games as a narrative medium that should be taken seriously. When nongamers like my Mom look at screenshots from a game like Wet, how do we expect them to react? This is why the game-shame issue remains at large. Grown ups are embarrassed to play games, and frankly, they should be if this is the best games can do. There’s a reason that dudes hide their Playboys and Hustlers. Should gaming be treated the same way? Something to keep in a box on the top shelf of a dark closet, gotten out only when the house is empty and we’re sure no one is looking?

Now, it can be argued that in some ways Rubi is actually an excellent female game character. She’s fully clothed, at least; and that rack does look physiologically possible. And there are other positives here: it says she’s confident and athletic, which are both good things. And she owns her own business, so she’s shattered the glass ceiling. Aside from an apparent drinking problem, the worst thing about Rubi is that she spells her name “Rubi.” Compared to the main character in X-Blades, she’s hardly hypersexualized. Plus there’s nothing wrong with a sexy, empowered female character, right?

Of course not. But my anger doesn’t stem from the presence of a hot, confident female protagonist who could kick my ass. My anger stems from the fact that today, in 2009, this is still apparently seen as a unique and original story by developers. Rubi will be depthless, clichéd, totally without complexity or motivation or emotion. There will be nothing to bond gamers to Rubi (except for her ass), nothing to make the storyline riveting or scintillating or any of the other words I like to use in reviews. How do I know this?

I don’t, for sure. All I know about Wet I gleaned from the website. For all I know it’ll be the Citizen Kane of videogames. But I have a pretty strong hunch it won’t be, because that would require effort and thought and creativity from developers, who increasingly seem to avoid those disciplines.

I spend half my time trying to get games taken seriously, so when I see something like Wet, it makes me mad. Can’t we do better? Isn’t it time we did better? We’ve seen some really important and special games in the past few years, and I’d never advocate for a world where every single game is a Pathologic or a Shadow of the Colossus. I like boobs as much as the next man. But for once, just once, I’d like to see the themes be bigger than the boobs.

And seriously, Wet? How juvenile are these people?

13 Responses to At Least it’s Not Moist