I’ve had Bravely Default for the better part of the year. I picked it up to play on plane rides and train rides and long car trips. I’ve done a lot of travel this year, and, playing mostly while traveling, I’ve now sunk 60 hours into Bravely Default.

In those 60 hours I still haven’t actually finished the game. I still think I have played enough to write a review. It’s difficult to say exactly how much more of the game that there is, but based on my play pace, I’d say I probably have another 20-30 hours to go… and I’m out of travel for the year 2014, but not out of games.

At first impression, Bravely Default is actually terrible. It is the JRPG that Zynga would make. To play well forces you to interact with social mechanics and “friend” people in real life to fuse their characters with your characters. Streetpassing more people adds them to a secondary “town building” interface, and then you carry this town in your pocket and occasionally receive gifts of goods or things to purchase. Strangest of all, the game has in-app purchases. If you don’t have enough friends to add to your roster to summon and aid you, you can try purchasing additional combat turns for real-world money. The game throws all these hodge-podge social mechanics at you at a speed almost too quick to process early on. Meanwhile, the story is the most generic JRPG tale possible, an epic where one must take a magical priestess and her fairy sidekick to a temple to “Activate the Wind Crystal” and then three other elemental crystals of increasing power thereafter. 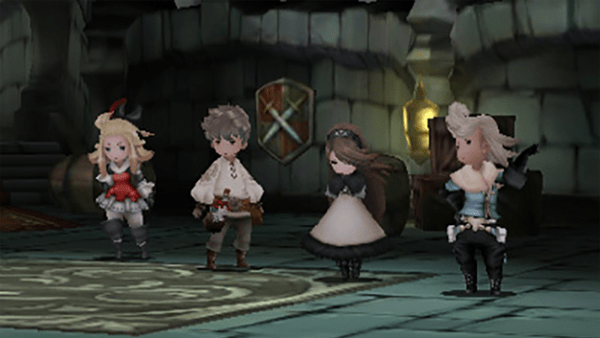 I knew, hour one, that I was going to play it for a hundred hours anyway.

I took notes. Here’s my general running commentary as I was playing Bravely Default: Flying Fairy, edited in some parts for clarification.

This game is stupid. The story is generic and uninteresting. The mechanics make no sense. I’m pretty sure I’m hate-playing this game.

But, these days, it takes a long time for any JRPG to ramp up, so I’m going to give it a longer chance. I could fill an entire essay talking about this, and someday I will: I think RPG designers learned the wrong lessons from Final Fantasy VII. The “slow burn before opening up” in FFVII didn’t mean that the opening section had to be dull. The Midgar segments were fun in their own right, yet there was still a certain magic when FFVII finally gave over to a world map. But now it seems like designers think you just have to fart around in a dull starting area for the first ten hours of a game for the next fifty to feel any good. From what I’ve heard, even Dragon Age: Inquisition has this problem.

Here it opens up a little bit, as I figured it would.

I think I may actually be invested in the Bravely Default characters by hour ten. But I’m pretty sure their outfits are designed purely to troll cosplayers. Characters can take different jobs in the game, which means they change to the associated outfit. This is fun to watch in battles. I think I want to be just about everything in this game for Halloween, despite how hilariously impractical some of it is. I think the short skirt and garter belt look just rocks on a lady mage. Though it is certainly awkward in the in-engine cut-scenes, where someone might have something really dramatic and important to say while cosplaying a dog. 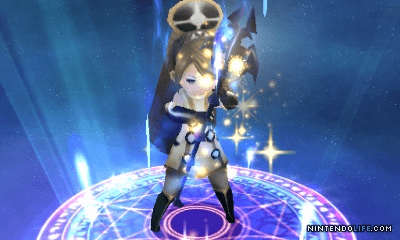 I have a serious bone to pick with the soundtrack of this game. The menu screen has its own music, a bland little music box ditty that plays every single time any in-game menu comes up. It’s not a very strong piece of music compared to the rest of the score. It’s on a short loop and kind of annoying. But I spend so much time in the menus, dicking around with various jobs and my little Farmville town, that this is the song I hear the most. It was probably supposed to be just a piece heard only between actual play moments, but it’s become basically the defining tune of my experience. I hear it in my head for hours after shutting the game off.

This game is weirdly dark. Not only do I leave piles of bodies in my wake everywhere I go, viciously slaying just about everyone with a name, but there’s all kinds of little creepy details. One of the subplots seems to be taken directly from Perfume: The Story of a Murderer. And the summon monster attacks. What the hell am I summoning? The first summon unlock looks like a giant spider that’s also Metroplex that’s also Cthulhu.

Also, for reasons that will probably become apparent to you at this point in the game (but unrelated to philandering) I want to slap Ringabel with a tire iron. I cannot do this, so as a substitute I will make him wear the stupidest hats.

I am starting to hear more rumors that this game is basically endless. Many people give up by this point. However, I have just discovered the ability to turn my characters into pirates, so I feel as if I’ve essentially won the game anyway. The girl pirates have little hearts on the eyepatches.

Besides, there can’t be that much more game left, because I have entirely filled up the “people” section in the notebook! Progress!

Hm, yes, I see. I have begun to fear that this game does not, indeed, ever end. 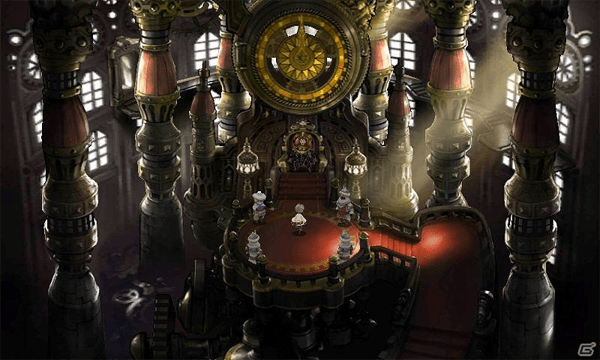 Once upon a time (by which I mean, back when I was twelve, and everything was already automatically more awesome), the amount of content an RPG developer could fit on a cartridge, or even a CD ROM, was pretty small. The Japanese language is very compact. When Japanese games were translated for the English-speaking audience, the localization team had a limited amount of space to use letters to express the same information as Japanese characters. This resulted in the kind of writing that had to do more with less. AKA, “good writing.”

Now, developers can fit a lot more information onto tiny cartridges, so localizations are more generous. These accurate translations appease fans who want to know they are getting the “real” experience. But the writing does not have to be tight anymore. Perhaps this is a Japanese cultural thing, too: where characters seem forced to repeat the same useless information, where every single character present must be shown doing a double-take to this or that unexpected happening, where there are a lot of little drop-in chat sequences that mostly reinforce characters’ more bland and banal traits which were already reinforced just fine in the previous drop-in scene. Every once in a while, a useful scrap of information will appear in one of these asides, and so I feel really bad just skipping them. But it does not make for a taut story experience. 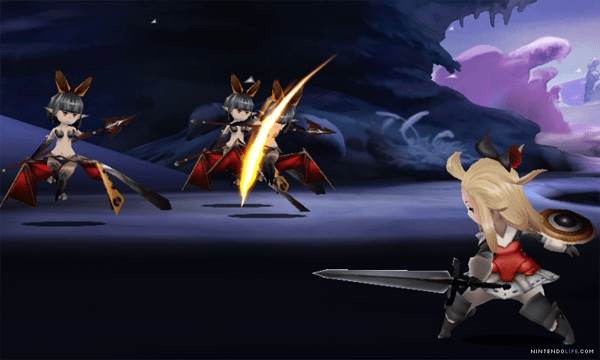 This is a shame precisely because there is actually some really crisp writing in Bravely Default. It’s just not in the main quest stuff. It’s in the little journal that sits on the sidebar, where the items and equipment are described. I’m not sure if these are lovely translations or just outright new for the English version, but I’m pretty sure whoever wrote them isn’t paid enough.

Beast Liver
The dried and shrunken liver of a beast. Even so, it is still about the size of a fist. It is carried around on a cord that has been passed through a hole made in one corner. It is extremely bitter and used in restoratives, among other things.

Here’s a helm in my inventory:

Adamant Hat
A cap made by sewing together pieces of the hard carapace of an adamantite shell. It is hard enough to turn away blades, supple enough to absorb impacts, and light enough for unhindered movement. The only drawback is its center gravity, which is slightly shifted to the right.

There’s no art for these items. Their descriptions are their everything. And they’re just great. I’ll get some useless-seeming drop, but then the flavor text in my notebook tells me it’s actually a time-frozen shard of lightning, which must be handled with care because the edges are sharp, and in that moment I love Bravely Default.

The game also has a couple of found journals that are located in this same sidebar, which reframe the primary story of the game. They’re similarly delightful, compared to the story I played through. It isn’t that the main story is bad, exactly. I’ve warmed up to it a lot. But it’s front-loaded with clichés, and does it ever drag.

As much as I ragged earlier on some of the game’s crappier, more inscrutable mechanics, there’s also a lot of great design on display, as well. The Quality of Life features in Bravely Default feel like someone raided my brain personally for all my favorite RPG Quality of Life features. It has both Earthbound’s “one handed play” option, and Chrono Cross’s “fast forward” button. It has an auto-combat system and some fun and intelligent dual-classing. It has thoughtful equipment design, where art for weapons and shields appear on the game’s character models when changed. The random encounter rate can be adjusted, or removed entirely; you can ramp up the enemy density if you need to level or just cut them out altogether if you’re ready to go straight to the boss. If you leave the game to sit for a moment in a town or dungeon, the camera will zoom out, just to show the full intricacies of its beautiful environments. 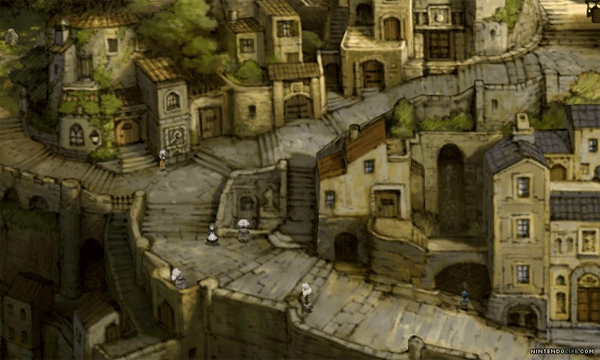 What Bravely Default really needs is the opposite of a Director’s Cut. It needs an “abridged” version, with less dialog, less Friend mechanics, and less rehashing. Bosses should have about fifty percent as much HP, and if you get locked into a combat pattern that appears to be working, you should just be able to shout “I GET IT ALREADY” into your DS microphone and have whatever damn thing you’ve been fighting for the last grindy hour die instantly. I’d play that game. Though I probably will still play this one, for another twenty-thirty hours or so, but if you’re considering it, you should know what you’re getting in to.

(As noted on the images, I got my screenshots mostly from this page at NintendoLife.)
You can email the author of this post at aj@Tap-Repeatedly.com.