He doesn’t really need help, precisely, since he’s got five books out, two movies nearing production, a show on the Travel Channel, and a fluffy hairdo, but you should help him all the same.

June 9 has arrived, meaning my considerably more successful brother Marcus is celebrating the release of his fifth novel, The Two Deaths of Daniel Hayes. Go! Go buy it!

Then come back and read the series of amusing anecdotes below.

Marcus goes though hell with titles every time. As I recall, the original title for this novel was Fadeout. Then it was, briefly, In Memoriam, I think, and then Candy Girls (which makes more sense when you read it). Back then the protagonist’s name was David Hayden. Then somebody with Authority decided, for no evident reason, that David Hayden should become Daniel Hayes. Marcus shrugged and did a Find/Replace. The reason for this brainstorm materialized shortly thereafter: that same person announced the book would be called The Last Days of Daniel Hayes. Because it rhymed, see? Do you understand now why those people make the big bucks and we don’t?

Knowing to choose his battles, Marcus ground his teeth and silently accepted that his gory, terrifying fifth novel would come equipped with a title suitable for Dora the Explorer. Then some other, more famous author released a book with “The Last Days” in the title, so that was out the window. With the rhyming idea no longer an option, he asked if he could go back to the protagonist’s original name, David Hayden. Even though there wasn’t any reason not to change it back, they said no. Daniel Hayes he was, and Daniel Hayes he would remain.

But there was no title. At this point I removed myself from the imbroglio (he always asks me for title ideas, and I give him really awesome ones and he says they’re “too intellectual,” the asshole), so I don’t know what happened then, but eventually I was notified that the book would be called The Two Deaths of Daniel Hayes. As titles go, I guess it will do; it’s no Past Imperfect, one of my brilliant suggestions, nor is it Hindsight, another, or Backward Glances, a third, but hey.

A few years ago, his second novel, At The City’s Edge, was originally called Accelerant. All (except the person who makes these decisions) agreed this was very nice title. They told him to change it. “Too scientific.” As usual, he put some feelers out, and as usual I produced a multitude of fine titles to consider, and as usual he poo-pooed them:

And finally, my masterpiece: Fearful Symmetry. I don’t know if you’ve read the book but if you have you’ll totally understand how brilliant that suggestion was. The novel was about, like, the Iraq war and how this veteran comes home and finds out that there’s a war going on in his Chicago neighborhood and they match and stuff, you know, symmetrical, and the war at home is even worse than Iraq kind of, and innocents are the ones who suffer in both and all that.

It would have, inarguably, been the greatest title ever for a work of fiction.

My brother’s opinion? “Too intellectual.”

Undaunted, I attempted to make lemonade out of his lemons. If Fearful Symmetry was too smart, I’d dumb it down, by diggity.

“How about Scary Matching Shapes, then?” said I.

He laughed. He LAUGHED AT ME. I try to simplify my brilliant title so it’s suitable for the slack-jawed mouth-breathers and crotch-scratching illiterates to whom he apparently peddles this dreck. I try to help, to add some sprinkle of intellectual pixie dust to this cross-eyed wasteland of mobsters and gang bangers. What do I get? Mocked. Ridiculed.

Ultimately somebody at the publisher named it At the City’s Edge, and that was the end of that.

Until a few months later, in the airport, what to my wondering eyes did appear? 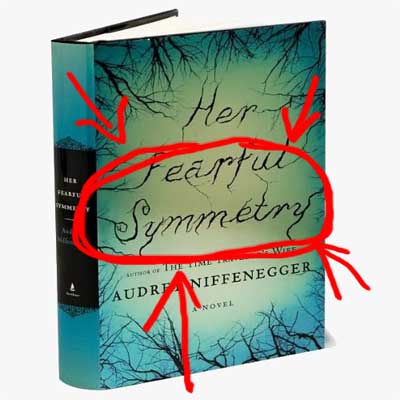 I called him. Oh yes, right then and there, from the Book Nook, right between Concourse E and Baggage Claim.

“You realize that’s your mom too, right? What’d I do?”

“THEY STOLE MY TITLE! MY TITLE! BECAUSE YOU ARE A PUSSY!”

“What, the Niffenegger book?”

It was on that day I vowed to destroy him and all he loved. And I will eventually. For now, though, buy his new book. It’s pretty good.

8 Responses to Help a Brother Out, Part 5

It has Something to do with Math