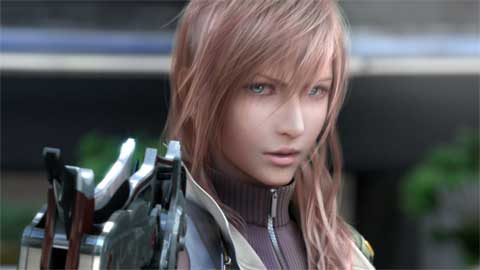 Square-Enix has a new trailer for the it-seems-like-they’ve-been-working-on-it-forever Final Fantasy XIII on their Japanese website. There’ll be a demo for this RPG with the undoubtedly horrible upcoming CGI fest Final Fantasy Advent Children Blu-Ray disc, but the game itself is not expected outside Japan until 2010 at the earliest, when it should launch for PS3 and 360 simultaneously.

I’m strangely fascinated by this game, I don’t know why. I’ve never had any interest in the Final Fantasy series, being more a Phantasy Star man myself. But for some reason this one’s got my attention.

I do have a funny story about it – well, it was funny to me, anyway – maybe that’s why.

I was at a convention with some friends when Square leaked the first shots on FFXIII, which at the time no one knew anything about. Speculation was rampant, mostly about that mousy-haired girl up there, but also about the game’s curious subtitle: Fabula Nova Crystalis.

Now, someone somewhere figured out that that’s Latin, and someone somewhere else remembered somehow that I speak Latin (sort of), and for an entire day, what seemed like half the game industry called my cellphone asking me what Fabula Nova Crystalis meant. Never mind that they could have Googled it and saved themselves their daytime minutes; never mind that you can pretty much figure it out by looking at it and thinking for a second, they were calling. I’m serious, the phone was ringing off the hook. The battery died eventually and all my friends were highly amused, because the conversation went exactly the same way every time:

X: Did you see the Final Fantasy XIII leak?

ME: No, I’m at a conference, I’ve got no web access. But Y just called and he/she told me about it.

ME: It means “New Crystal Chronicle.”

ME: Yes. Or “Crystal Chronicle Nova,” I guess. The word is the same.

Of course, that was a bazillion years ago when development first started, and since then there’ve been more announcements (but, strangely, few Square-announced translations of the subtitle), and I’ve formed a peculiar attachment to the game. With it coming to both the 360 and PS3, I suppose there’s nothing holding me back from grabbing a copy when it comes out… nothing except, of course, the fact that by the time it does I’ll be 87 years old and too arthritic to play it.

2 Responses to And that’s Final