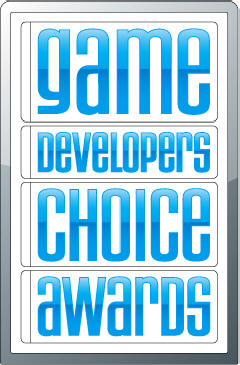 The ninth annual Game Developers Choice Awards were held last night at GDC – which Steerpike is still not attending, but which hasn’t stopped any of the PR people from hammering him with tech demo offers if he “stops by their booth.”

We love the DevChoice awards, because IGDA members vote on the winners, and IGDA members are almost universally developers and as such are cooler than the people who do the Spike TV awards. I am an IGDA member, and I voted, and as usual not one of my picks won a damned thing. Also as usual with DevChoice, the winners tended more toward actually deserving it than the more mainstream shock-and-awe types of award shows, where winners are generally chosen for the wrong reasons, like sales figures. One interesting aspect of this year’s awards was that the same six or seven games totally dominated every category. In a year with a fair number of unnoticed but admirable releases, I was a little disappointed to see my colleagues not dig any deeper when selecting nominees and winners. Clicky the linky for a full list of winnahs and losahs.

Best Handheld Game:
God Of War: Chains Of Olympus (Ready at Dawn)
Other Nominees: Patapon, Advance Wars: Days of Ruin, Echochrome, The World Ends with You

While I don’t have much complaint as far as who won and who lost, this is an unusually mainstream and homogenized crowd for the DevChoice awards. Typically you’ll see some more obscure games nominated, though they almost never win. And while we can all likely agree that Left 4 Dead, Braid, and LittleBigPlanet are important, wonderfully-designed games, to see them dominating nearly every category is a little disheartening to the variety of this medium.

Next year should be especially interesting, since 2009 is, by all accounts, going to be a real breakout for indies and small downloadables. Games like Auditorium, Love, and Blueberry Garden are hugely innovative and promise real excellence, so it will be interesting to see if they can compete with more traditional COTS titles.

8 Responses to I’d… *snif* Like to Thank… the Academy