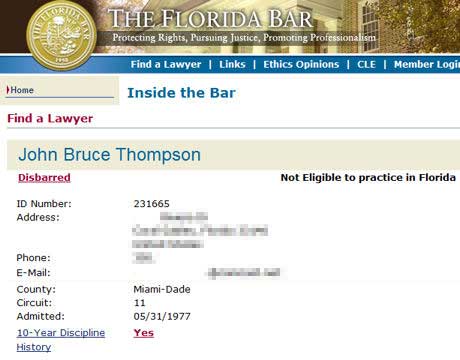 I totally stole the above picture from the indispensible gamepolitics.com site, but it’s worth the theft to share.

Jack Thompson once invited me to “go to hell a little more quietly” based on an article I wrote in 2005. He also indicated once that I was “damned to an eternity with other murderers, molesters, child killers, and monsters” for defending video games. I’ve never murdered, molested, child killed, or monstered, but I guess I’m going to have to room with some of them in the afterlife. I mean I’ve eaten kids, sure, but who hasn’t? Still, I leave the killing and cooking to others.

I do feel it’s important to point out that, disbarred or no, Señor Thompson is hardly out of our lives. Just because he has been BARRED FROM THE PRACTICE OF LAW FOR LIFE WITH NO OPPORTUNITY TO APPLY FOR REINSTATEMENT EVER EAT IT BITCH doesn’t mean we’ve heard the last of him.  He can still do his usual media-gobbling, spotlight-seeking craziness without a license to practice law.

On the other hand, what he cannot do is be a lawyer, which means that even Fox News will no longer be able to bill him as “Jack Thompson, First Amendment Attorney” (!). Plus the whole fact of being disbarred is a huge shot to his credibility, meaning mainstream press – which has often turned to Thompson for “expertise,” not realizing what a crazy fellow he really is – will look at him now with a more jaundiced eye.

Thompson’s disbarment is a victory for the games industry, certainly, but not one we did much to achieve. It was his own unethical and often insane behavior that cost Thompson his license to practice, not anything the industry did. What we as gamers and the industry as a whole must not do, however, is settle down to rest comfortably on our laurels. The battle for equal protection of gaming expression is really just beginning, and complacency at this time, even after the fall of one of gaming’s most implacable foes, could mean undoing in the long run. So relish the fact that Thompson has no job now, but don’t give up fighting the good fight.

But if you want, you can boot up GTA and go rape a cop or kill a hooker or whatever it is he claims those games teach people to do. You know, in memoriam.

One Response to We Hardly Knew Ye