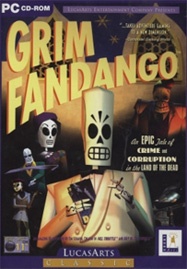 “Read no further! Play this game instead! I hereby nominate this for Adventure Game of the Millennium! Five stars! It’s got it all! It’s epic! If you must know more, here are some details.”

Read no further! Play this game instead! I hereby nominate this for Adventure Game of the Millennium! Five stars! It’s got it all! It’s epic! If you must know more, here are some details.

The story is loosely based around the Mexican Day of the Dead holiday and is reminiscent of the film noir of the 1940s and the Cuban casino scene of that time. The plot spans four years, each segment occurring on the Day of the Dead. You are Manuel Calavera, Grim Reaper and travel agent to the dead. You are a superior salesman, but for some reason, you cannot get any good clients, while your coworker, Domino, sells tickets every day to the Number 9 train, which goes straight to the ninth underworld. You’re lucky if you can give away a walking stick for the otherwise four-year trip. Finally, you manage to steal one of Domino’s clients, Meche, who is an absolute saint with nary a blot on her record. For some reason, however, your computer will not let you give her anything at all, let alone the Number 9 ticket that rightfully should be hers. She sets off on her long, dangerous walk, fraught with peril. You discover signs of corruption and suspect that you are being cut out of the loop. You start to investigate and manage to step on some mob toes, meet some revolutionaries and a huge cast of other characters, and set off to find Meche to apologize for your mistake and because you’re maybe (just a little bit) (if you weren’t dead) in love with her. That’s just the beginning—the remainder of the story deals with “crime and corruption in the land of the dead.” The plot in this game is extremely rich, and there are some pretty hilarious parts. In addition to the main story, there are tons of little subplots. 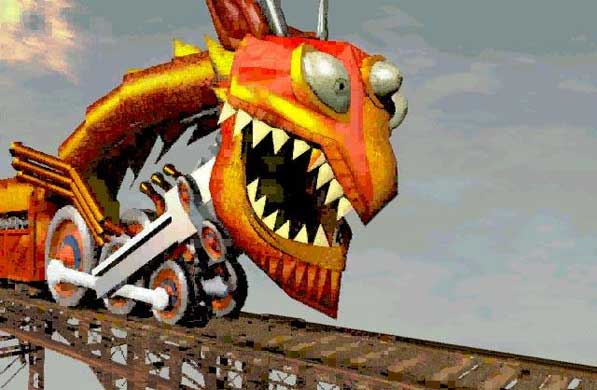 The graphics are pure eye candy! The backgrounds are very Art Nouveau, in keeping with the forties style of the game. There is a lot of background movement in the scenery, including some very convincing water lapping at the dock in Rubacava’s harbor. The already-dead skeletons can get even more dead (dead for real, I guess) by being “planted” (usually with a gun), which means they decay into a little flower garden. This was always entertaining to watch—lovely yet somehow macabre. The cutscenes were magnificent, too. The characters are all made up of 3D polygons. It was a little off-putting at first, but they were so well-done that I learned to love them.

One of the best things about the art was the hot rods. Tim Shaffer must have been one of those kids in junior high school (we all knew one) who drew cars on his Pee Chee folders and book covers with zillions of tailpipes and flames and big tires. Year 1 has a hot rod car, years 2 and 3 have hot rod boats, and my favorite—year 4 has a hot rod gondola.

The music, sounds, and voice acting are all first-rate! The music is a kind of blend between big-band swing, salsa, and Star Wars movie. It really makes for a pleasing mix. What’s more, there were numerous instances where I sat totally stymied, hearing the same music over and over again, and I never got sick of it. 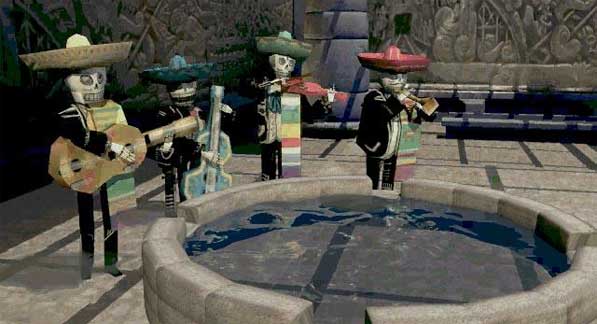 The voice acting is very good; I loved the Spanish accents. I recently got one of those Cambridge Sound Works speaker systems with a big subwoofer, and the bass tones of some of the voices just made me melt, they were so fine. There is one major character in the game, a demon named Glottis, who got on my nerves quite a bit, though. If he wasn’t driving, he would sit in the car and make putt-putt noises with his mouth. While it totally suited his character, I found it really irritating. Glottis is a big dufus kind of guy who is awfully similar to an annoying uncle that I have, so maybe that’s why I found him so unattractive.

Many have complained of the interface because it is so unfamiliar. There is no mouse support; you either use the keyboard or a joystick or game pad. (I used a game pad.) To interact with something, you must position Manny to where he will look at it. When he turns his head toward something, you can either pick it up, talk about it, talk to it if it’s a fellow “person,” use an inventory item with it, etc. I for one found it took a lot of getting used to, but then I liked it a lot. There is no pixel hunting, and the absence of a cursor on the screen makes it really immersive. Even with the game pad, I found it hard sometimes to control Manny (I swear the bag o’bones had a mind of his own!). It also has long pauses in between scenes while the next scene’s files decompress and load up. I have heard that you can get around this by copying the CDs to your hard drive, which I did not do. I found the delays only a minor drawback, though, unless I was going back and forth between two places a lot or went back to another place by accident; then it became tiresome. (The interface and slow loading characteristics made me think this game was designed with the ultimate goal of porting it over to PlayStation.) 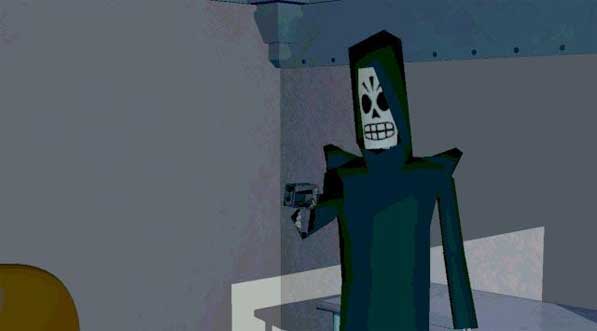 The puzzles ranged from easy to very difficult, but all but one made sense to me. I did have to get hints on a couple of the more difficult puzzles. The puzzles mainly consist of picking up items in one place and using them in another place to get different items (typical LucasArts). All together, I estimate that I spent about 30 hours on this game, compared to the advertised 40 to 60 hours, but I am an experienced adventure gamer. Even so, probably about ten of those hours were spent with me totally stymied about one thing or another. I didn’t mind, though, because it postponed the end of the game that much more.

This is far and away the most stylish and entertaining game I’ve ever played. You’ve got to play it! No self-respecting adventure gamer should be without it. This is what other adventure games only aspire to be. It is extremely well-written, well-executed, and above all, fun to play. Are you on your way to the store yet? You’d better get a move on! A better game I’ve yet to play … I’ve got to update my favorites list and put Grim Fandango in the number one spot. Two thumbs up (and they’re both mine!). The main drawback of this game is the ending—I wish there wasn’t one.