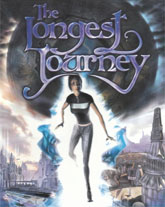 …the outside world was completely shut out by the little world on my monitor. My peripheral vision ceased to exist. My kids got ten thousand “shaddups” and “go aways” and “outta my faces” as I played.

Don’t Talk to Me

I dislike “conversation games.” Discworld Noir, the Broken Sword games… many that most players consider classics just didn’t appeal to me much because of all the yakking. There is nothing I would less rather do than click endlessly on a conversation tree and watch the characters onscreen contract repetitive motion syndrome.

Why, then, did I fall in love with The Longest Journey? It certainly is a “conversation game.” And the characters onscreen do repeat their very limited range of motions ad infinitum as they converse. By all rights, I should not have liked this game very much, but the fact is, I enjoyed it more than any other game I have ever played, and I mean ever!

And that’s saying quite a lot. 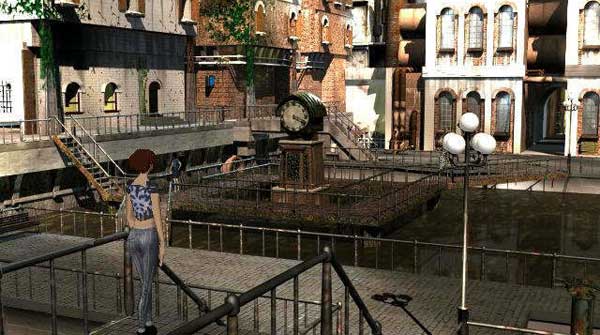 Perhaps it is because of the story. You play as April Ryan, an 18-year-old girl on the threshold of womanhood. April is unwillingly thrust into the position of saving the world, and as she undertakes her tasks, she takes that final step and learns to accept responsibility not only for herself but for the fate of humankind. And this is but one of the many story threads that run through the game.

A general overview: Many millennia ago, the world was split into two parts, Stark for technology and logic and Arcadia for magic. Each of the halves is separate from and completely ignorant of the other, except in legends. There is a carefully maintained balance between the two halves of the world, and the balance begins to crumble.

April learns that she is able to “shift,” through her dreams at first, between these two worlds. She must set right little imbalances in both worlds in an effort to stave off impending chaos. She soon discovers, though, that it is up to her to correct the greater imbalance or both worlds will be doomed. 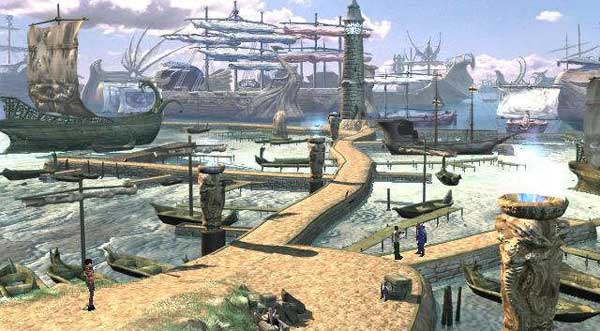 The story is very rich and deep. There are many subplots, and great attention was paid to detail. There are even religions and mythologies for each of the worlds, and although this is a fantasy game, the whole story becomes very believable. Sucked me right in, I’ll tell you. And even though your character cannot die, there were some truly frightening moments, and I was crying my fool head off at the end of the game. (Speaking of which, the ending is quite satisfying—nice and long and wraps things up.)

Little not to Love

Maybe I liked The Longest Journey so well because of its beauty. The backgrounds in both worlds – Stark and Arcadia, they’re called – are absolutely lovely. Far and away the prettiest game I have ever seen. Just take a look at the screenshots to get an idea for yourself. And the cutscenes… oh, the cutscenes. Mere screenshots cannot convey their beauty. Remember those Roger Dean pictures on the album covers (back in the olden days) of the band “Yes”? The backgrounds in The Longest Journey brought those to mind.

The characters are 3D overlaid on 2D backgrounds. As such, they do suffer occasionally from 3D syndrome: i.e., not enough polygons in some cases, visible polygons, invisible limbs from time to time, bigger pixels than the rest of the screen… but this is really a very teeny weakness when measured against the game as a whole. 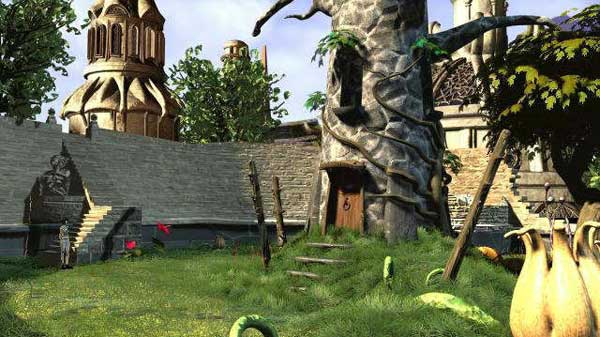 Why is it though, that every developer of a high-caliber game feels the need to include an obnoxious sidekick? I do, however, believe myself alone in disliking these characters to such an extent. For instance, Glottis in Grim Fandango — I hated him; the rest of the world thought he was the proverbial cat’s PJs. Arthur in the Journeyman Project games — he was so annoying. (The current crop of TV situation comedies is no better — the fad du jour seems to be to include a peripheral character with a strange voice. If they don’t start out with one, they write one in before too long. Drives me up the friggin’ wall and makes me not watch much TV (not that I did before anyway). I mean, think about it — in real life, we may meet one or two people over the course of our entire lives with really weird voices, and yet it is an everyday occurrence in the sitcom world. End of rant (you have to excuse me; sometimes I get a little carried away). The Longest Journey is no exception. The sidekick is simply awful. Not the voice-acting, just the character itself. I implore all you game developers out there… quit with the damned sidekicks already! 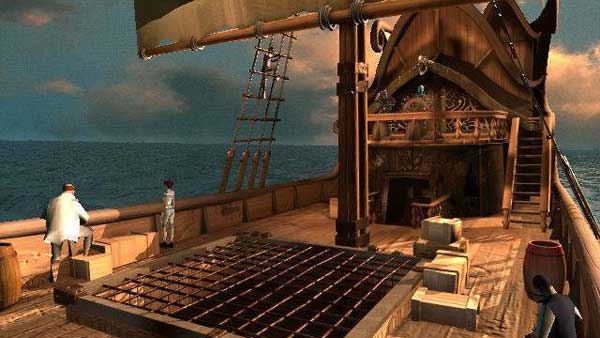 But I forgive it. So much else there to love. The music in The Longest Journey was movie-quality. It really worked on my emotions in all the right spots at all the right times. The sound effects were great, too.

The puzzles are completely organic. Mostly they can be solved using common sense, or at least the common sense that would apply in whatever world you are. You don’t have to try every inventory item on everything else; if you have selected the correct inventory item, it will flash when you hover it over the item you wish to use it on. The puzzles are sometimes baffling but never unfair, and this is one game that, with a little persistence on the part of the player, can be completed without using a walkthrough. You will never be stymied for very long. 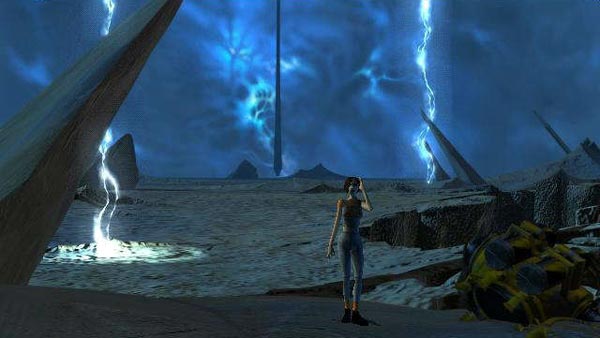 I have figured out why I liked the game as much as I did: The Longest Journey is a magnum opus. It’s a work of art. Even though it does have some small flaws and a couple of things I would change, it is absolutely breathtaking in all respects. All of the individual elements are blended together into an awesome whole. The environments are alive, I cared for the characters… all in all, the outside world was completely shut out by the little world on my monitor. My peripheral vision ceased to exist. My kids got ten thousand “shaddups” and “go aways” and “outta my faces” as I played. And those conversations I talked about earlier? They only serve to move the game along; there is no unnecessary gabbing like in Discworld Noir just to fit in a few extra jokes.

They just don’t get any better than this.

Get it at Good Old Games – DRM-free and recompiled to play nice with today’s PCs.

3 Responses to The Longest Journey

My Idea of Fun: the Time Bandits