The official release of Valve’s first venture into hardware doesn’t happen until November, but those consumer whores among us are already testing out the Steam Controller and Steam Link thanks to the power of pre-orders we’d completely forgotten about until FedEx sent a nastygram to our email saying “answer your door, ya feckin’ shut-in.”

It’s a lie, saying I’d forgotten about this pre-order. I was perfectly aware of it. I was in fact pretty excited about it. If you peruse our forums you’ll see a few mentions of Steerpike dragging his monstrous PC out into the living room to play certain games; it’s a pain to do and of course some games work better with a controller from the sofa while some other games work best with a mouse and a keyboard from an office chair. Until the Steam Link the only way to have the best of both worlds when it came to PC gaming was to either haul your rig back and forth, or have two PCs.

Steam Link and Controller unboxed. I put the batteries there for scale.

Valve has been supporting Steam In-Home Streaming as part of the Steam service for a while now. Basically it lets you stream action on one PC to a display controlled by another. But you still needed that second device for it to work, and while Valve has done an amazing job making sure that you don’t need much computer on the receiving end, there’s a limit to how far compression algorithms can go. People have tried to stream Steam using iPads, Raspberries Pi, ancient netbooks, and assorted other devices with varying degrees of success and investment. The ideal is a device that serves as a dedicated streaming solution and provides enough peripheral support for technically-optional things like wireless and doesn’t cost a lot and is easy to set up and use. Enter Steam Link.

This $50 device is exactly what it says it is: a tiny little box that links your television in one room to your PC in another room. Steam Link is desirable (theoretically) because — being designed and built by Valve — it should work better than any other solution for Steam In-Home Streaming.

Steam Link is an ideal solution for all the right reasons, most of which come down to hardware and flexibility: the little device supports practically every reasonable variant of home streaming that a consumer might wish for. Its specs:

That’s all you could reasonably want and it’s only fifty dollars. Yes, they could have gone with USB 3.0 — or maybe one 3.0 — but why? The ports are meant for controllers, not external storage. The device is a streaming box, not a media PC. Similarly the decision to support wired or wireless out of the box is just a nod to practicality; you really, really want to use a wired connection with your Steam Link if at all possible, but it’s nice to know the option’s there. It’s running a variant of SteamOS, which is in turn a heavily modified version of the Debian Linux kernel and is probably better suited for applications like this one than it will be for running a desktop environment. 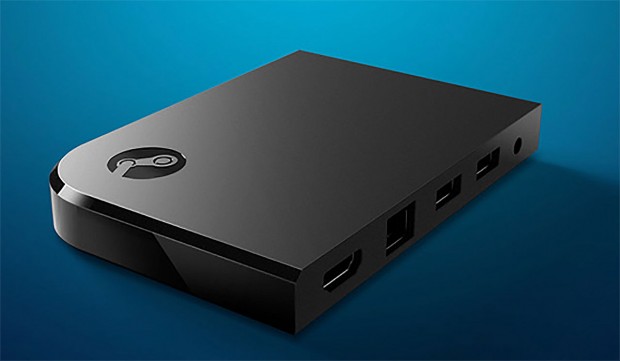 There’s a third USB port on the side you can’t see. Click to enlarge.

Steam Link promises 1080p resolutions (for all intents and purposes, 1920×1080) at 60 frames per second, the odd straggly frame or two aside. The whole point is that your Host PC in the other room is a horsepowered gaming machine that does most of the heavy lifting of running games, then simply pipes the video over to Steam Link while Steam Link pipes controller input back to the host PC.

Steam In-Home Streaming never reeeeaaaaallllly came out of beta, and anyone who’s tried to get it working can tell you that there are some hiccups along the way. As for Steam Link, you need to follow these steps to set the device up:

It took longer for my host PC to boot up in the other room than it took for me to unbox and hook up the Steam Link.

Using a wired connection to an Asus N56U router, Steam Link assigned itself an IP address, discovered the host PC on the network, verified that Steam was running on it, negotiated a friendly relationship with Norton, then announced itself ready to launch Steam Big Picture. From there it was more or less exactly as if I was in the other room. 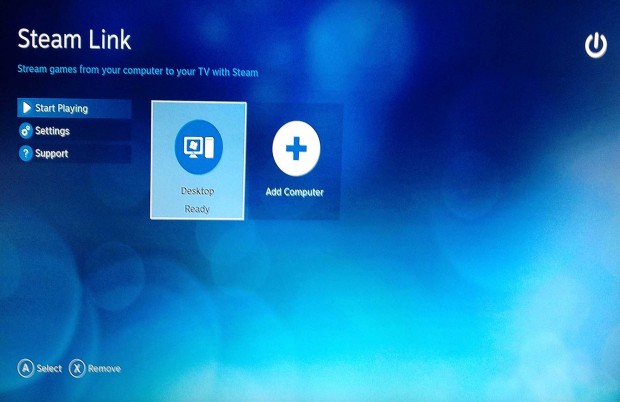 My computer’s name is “Desktop.” Clever, I know.

The worst thing I can say about Steam Link from a setup perspective is that it doesn’t automatically compensate for overscan, something game consoles do blessedly do, but getting it to compensate for overscan is very easy. That it wouldn’t was my biggest fear by far when it came to anticipation for the Steam Link. My Samsung television is notorious for forcing overscan on you even if you don’t want it. I never got Windows PCs to work right unless I forced desktop resizing through the nVidia control panel, winding up with an upscaled 1804×1014 that cost much visual quality. Steam Link scales the screen better and it’s really easy to do. 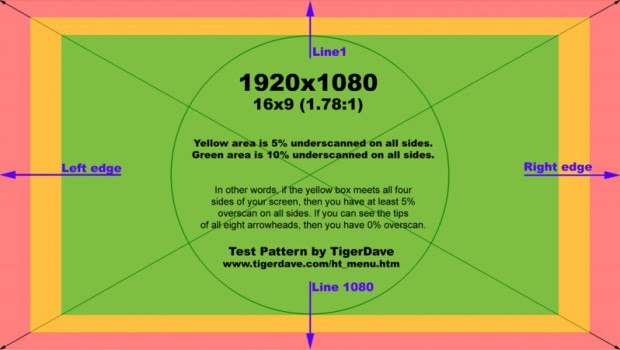 Overscan — the bane of all people and things, everywhere, forever.

I’m not able to show you any screenshots of what games look like through Steam Link, because when I play a game in my living room, the PC in the office is actually running it — if you went in there you’d see it on the screen — so any screencaps or videos I take would be of the host machine and would therefore look fine. I will say that the vast majority of games in my library ran great and looked indistinguishable from how they looked on the host PC. I’m sure if we put the two screens side by side there’d be a visible difference, and certainly you shouldn’t expect this level of performance from a wireless connection or even a non-gigabit wired one, but it works far better than I imagined it would.

What’s interesting isn’t that there is a quality loss, but that it’s (A) quite minimal and (B) limited to certain games. Artifacting, stutter, and blockification were most apparent when I ran The Witcher: Wild Hunt. In and of itself that’s not a surprise since Wild Hunt’s visuals are hugely punishing. What’s interesting is that it implies the Steam Link hardware is actually doing more image processing work than I’d heretofore assumed. It also dynamically adjusted the level of quality as I played: sometimes it was crystal clear, sometimes far from it. Even at its worst, though, Wild Hunt was the only game that ever eased into the realm of “too ugly to play streamed.”

When it’s struggling, images piped through Steam Link seem muzzy, like you’re looking at them through a translucent, moderately filthy screen door that gets increasingly dirty and grid-ified the more the device chokes. As a general rule, Steam Link seems to try and maintain frame rate at the expense of visual fidelity. When I turned Wild Hunt’s visuals down to the medium-high range, streamed image quality skyrocketed.  As Valve improves its streaming software and compression algorithms, the problem should become less and less apparent regardless. Developers too might be able to accommodate for Steam Link to some degree. That’s one of the great benefits of the dedicated H.264 decoder and on-board operating system — Steam Link isn’t just a pass-through, it’s a tiny little PC.

Satisfied in general with Steam Link, I set out to break it, and amazed myself by not only failing to do so, but by succeeding at something I was 100% certain wouldn’t work: I successfully ran Dragon Age: Inquisition.

That’s a surprise because DA:I is Not A Steam Game.  You can only (I think) buy it on Origin, EA’s laughable idiot stepchild competitor to Steam. Origin is basically a Dragon Age Inquisition launcher. You can’t buy it on Steam. You can’t install it under Steam, you can’t play it through Steam.

You can start the game from Steam, as you can start any game from Steam, in the same way a Windows shortcut can start an executable from anywhere. But triggering an executable is not the same thing as running through the SteamWorks API — something I assumed (wrongly, it seems) was required — I just figured that Steam Link wouldn’t be able to stream stuff that wasn’t running through the Steam service, using Steam APIs.

Getting Dragon Age to run required a little more jiggery-pokery than your average bear, but overall it was pretty easy; laughably so, really. 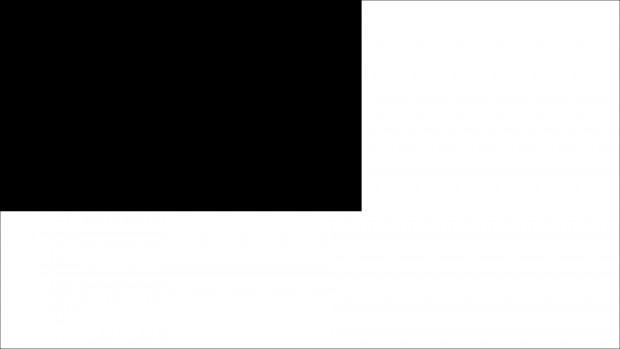 Here’s what I did:

Presumably the same general procedure could be applied to anything. Steam Link isn’t limited to displaying Steam Big Picture; it will — usually when it’s crashed — show my dual-screen desktop or various other windows. You can’t control them and it’s clearly not meant do it; Dragon Age: Inquisition ignores Valve’s Steam Controller no matter what you try and (of course) still requires that Origin be running in the background. But I get the sense that with a little bit of back-end hackery, Steam Link could become a full-service desktop teleporter. Thanks to the device’s embarrassment connectivity options you can keep a 360 controller, keyboard, mouse, and Steam Controller all hooked up at once if you want.

So is all entirely rosy?

Steam Link does crash, by which I mean both the hardware will sometimes lock up and Steam will sometimes quit without warning, which doesn’t happen in the other room. Occasionally the stream will stop, leaving you with a locked frame or blank screen; and sometimes the stream will pretend that Steam has crashed when it really hasn’t. But all these events are pretty rare once you have the hang of things.

Finding things to criticize in Steam Link is like reviewing lemon juice and taking points off for sourness. I wouldn’t say no to a physical Power/Reset button on the device itself, I guess; the Steam logo button on the Controller acts as your power switch (Steam Link will also respond to the big green X button on a 360 or Bone controller), but if the application has crashed this button usually does nothing. A physical unplug/replug of the Link itself is sometimes necessary when things really lock. Similarly Steam Big Picture has a few unlovable quirks, not least of which is there’s no option to restart Steam from it — you can restart your Steam Link, or drop out to Steam Desktop, but you cannot restart the Steam app. Maybe this is more a Windows security issue than a flaw in the system, I’m not certain.

Oh, and it identifies itself as “LocalHost” rather than something more recognizable on your network, which really reaching as far as complaints go.

Steam Link performs so much better than I had imagined, out of the box, that almost any complaints seem squeaky. If like me you were waiting for Steam Link as an affordable way to stream your PC games into your living room, you will not be disappointed. But if you’re not a consumer whore like me, you will have to wait until November. Nyah.

Next up I’ll talk about the Steam Controller, which is a whole other topic.

Tell Steerpike the purpose of overscan at Steerpike@Tap-Repeatedly.com.

Sometimes the Stories Write Themselves