I met Connor Hart at Philly Dev Night, where he was showing off his game PUSH, a PC-targeted Sokoban-style puzzle game. Now that PUSH is released, I checked back in with Connor to ask some questions about his process, the game, and the trials and tribulations of being a part-time game developer! Hit the jump for another edition of Local Flavor!

AJ: Tell us a little about PUSH. Is it your first game? What else have you worked on?

Hart: PUSH is a sokoban-like Puzzle game based on child’s perspective of the world and the power of the imagination. It is different from other sokobans in that it’s focus is on the connection between time and space in turned based movement. It starts off pretty basic, but still to this day I cannot beat the game myself. The logic is far from expected and gives your brain some serious exercise.

It isn’t not my first game, but it is the first one I and the rest of the team has finished. We have a few small incomplete games public, but tons more that are still  either too ambitious or not good enough to publish. Those I think are notable would be A Shapian’s Tale, Brownberry, Plumboy and Digbox.

AJ: What got you thinking about PUSH and starting to make it?

Hart: Well I wasn’t the one to conjure up PUSH. That would be Allen, our lead programmer. He told me it all started with a restroom stop while on the road. The different colored tiles he saw there seemed to be the birthplace of this unique puzzler. Eventually he turned his ideas into a little game and worked on it without me or anyone else for many months.

As for my part, I am the lead artist. Allen wanted me to overhaul his programmer art, and so I was brought in, and from there the theme of the game came to life. The children’s book and imagination approach were bounced around between him and I. Before we knew it the entire team was in for a big project. 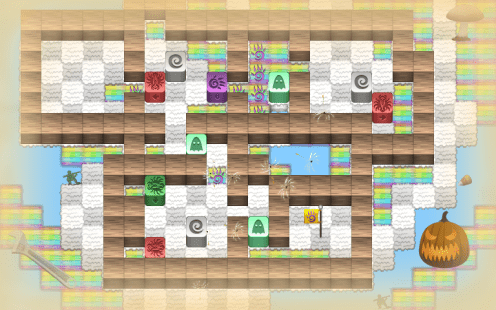 AJ: What’s your work pattern like? You’re still working a day job, right? How do you divide labor when you’re working on the game?

Hart: I am unfortunately, but for the first half of my part of the project I was without a dreadful day job. Once I started working full time things slowed to a near halt. What took days would take months, it was and still is a harsh schedule. Even doing this interview took me weeks. There was never a point where I would have to choose working a day job over finishing PUSH, but it was a burden. As the creative director and lead artist I would still communicate ideas and plans for development  to the rest of the team.

Allen Webster is the lead programmer and level designer and Tyler Camp is the auxiliary programmer. Gabriel Gregory did the music and level tiling. I created the vector art and animations while Emmanuel Nieves wrote and illustrated the children’s book for the game. It was a rough time to communicate and work, especially with most of us working or in school. Three of us live in Philly, the programmers communicated through Skype. 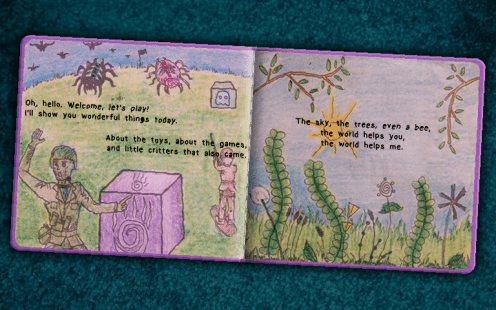 AJ: How is your work environment? Is it all work from home/remote? Do you have a quiet place you like to go?

Hart: We all work from home, I worked from a broken laptop so there was no traveling to that quiet place for me. I can’t speak for the others, but they all used laptops, and from what I could tell it was at home when they worked on the game. We hope to get a studio one day, but I think it will be a while before that happens.

AJ: What games inspire you – what are some of your favorite games?

Hart: Personally my favorite games happen to be the Pikmin games. I think mainly because they symbolize and rely on the idea of teamwork to solve a problem. Although it isn’t easy to tell in PUSH, it is there, you just have to look a little hard than you would in our other games.

AJ: Has the Philly game scene been helpful in your development process?

Hart: It has, but only to the extent of becoming a Bizspark company, which is still a great help. I (as well as others in Philly) did not step foot into the Philly game scene. Quite frankly it was hard to find. Not until PUSH was nearly ready for IGF did I met you at Philly Dev Night. I wish I could say I was more apart of it, but time and work are my biggest boundaries to mingling with other local devs. 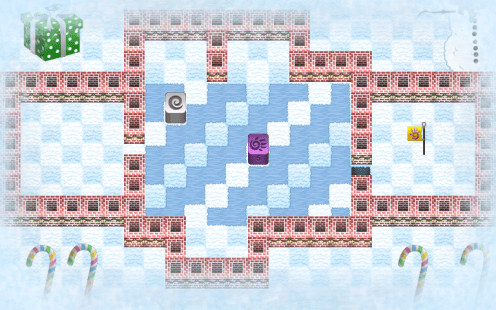 AJ: Do you have future release plans?

Hart: We released PUSH for PC on March 5th, 2015. It was our only target platform for release other than the Windows Store. We ran into some incompatibility issues with the Windows store, which set us back in possible sales.

The game was never meant to make it to other platforms, but from the feedback we have received we have changed our minds for the future of PUSH. Just recently Allen has begun work on a remake (PUSH Back is our pet name) which will make its way onto many platforms including mobile markets such as the Apple appstore, Google Play, etc. We also hope to reach consoles if possible.

AJ: What would you hope to get out of game dev in the future?

Hart: My answer to that is quite simple actually, change. My biggest motivator and what keeps me making games is the hope that they will finally make a difference in the way everyday lives unfold. Not just by entertainment value, but by educating and evaluating who we are as a people. That is what I hope to get out of game dev in the future.

Hart: Not much really, I would like to thank everyone who has played the game, feel free to reach out to me and my teammates as well as Team Overreact on Twitter and other social media. We are hoping our next game will be the one that brings us into game dev full time. Thank you for having me, it was a pleasure!

AJ: You’re welcome, and thank you too!

Check out the game on Itch.io or at http://www.pushthegame.com.