X-Wing doesn’t have a tutorial, but that doesn’t mean it doesn’t teach you how to play.

Half a dozen invaluable LucasArts classics hit GOG late in October, which, at least in the world as I perceive it, would be internet-shattering news had it not happened the same day that Marvel announced the whole of Phase 3.  So I’ve been playing a lot of X-Wing these last few weeks, because even though TIE Fighter is better I felt like starting at the beginning.

Two things struck me fairly immediately.  One is that the game holds up really well, all things considered; I’ve been playing the 1998 version, whose graphics are bolstered by X-Wing vs. TIE Fighter‘s texture rendering to make the models a little more attractive, but this is all aesthetic: the core gameplay still feels surprisingly smooth and complete, and the 3D models help to avoid the almost claustrophobic sense one gets from X-Wing‘s predecessors like the first two Wing Commander games, which used 2D sprites instead.

The second thing is that X-Wing, which comes from that era of PC games when manuals were not only produced but expected to be read, that era which could sometimes be initially quite punishing, especially for simulators, teaches you to play in the first several Tour of Duty missions.  These aren’t tutorials in any normal sense of the word; later games in the genre – later games in the series – would have you flying alongside an instructor character for the first few missions.  X-Wing doesn’t have voices in the missions yet, so it can’t take that route.

Now, granted, some players would know how to play before trying to tackle a Tour of Duty.  By design, I’m sure, the Tour of Duty hangar is off to one side of the main hub; the Historical Missions hangar takes center, where some proper training missions can be found, amongst other things: opportunities for new pilots to cut their teeth on each of the game’s three flyable craft without any of the stakes of the “real thing.”  Some players would have read the manual before starting; others would have reflexively followed the indirect control of the big door in the middle opening to reveal a parked Lambda shuttle and messed around a bit there before discovering that the Tours of Duty exist at all.  But the point is, rather than be compulsory about training, the game essentially provides three vectors to learn.  The first Tour is just the most subtle about it.

In X-Wing, each Tour of Duty is a series of a dozen missions that detail the Alliance’s struggle in a given area of space, and form the bulk of the game.  Missions in each Tour must be taken in order.  So if you were like me and wanted to get to the main campaign immediately, the first mission you’d find yourself flying is Tour 1, Operation 1: Destroy Imperial Convoy.

This mission feels like a bit of a gamble on the part of the designers.  There isn’t a single TIE in it.  There isn’t any dogfighting.  That is what makes it work.  The mission is simple: a Corellian corvette, the Bixby, wants to defect to the Alliance.  In a titular X-Wing, you must destroy the freighters the Bixby was assigned to protect – freighters carrying valuable Imperial supplies – while Y-Wings from Blue Squadron oversee the capture of the Bixby.

Later in the game, this sort of mission would quickly go south, with an Imperial frigate jumping in and launching TIEs, or with a flight of Assault Gunboats showing up to ruin everyone’s day.  But this mission goes completely as planned.  This accomplishes a few things: 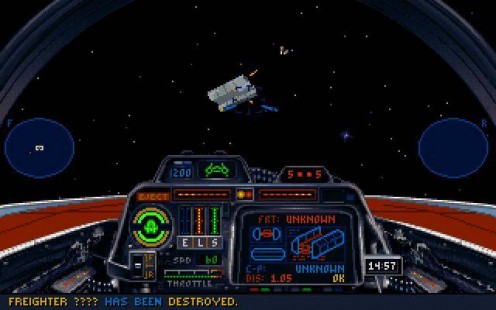 You actually can’t find many screenshots of X-Wing.

Point 3 is the most important here.  I perhaps only realized it because I was returning to the game from so long ago that I didn’t recall what buttons accomplished certain things I knew I needed to do.  Brand new players would quickly realize the need for some of these features.  Destroying a freighter is mostly a matter of making several attack runs on it, but they are tough and can take some punishment.  Required for completing this mission is learning how to divert power from engines to your laser cannons, trading speed for recharge; otherwise your lasers will quickly run dry and not recharge at all.  (Power management is an important aspect of X–Wing‘s gameplay throughout.)  Bonus points that will probably come up are throttle control (so that those attack runs against a freighter can be extended by slowing your X-Wing down), targeting (so you can find them in the vast blackness of space), and switching to torpedoes, but none of those are strictly necessary for victory here.  (To be sure, all that’s really necessary for victory is not crashing into anything for long enough for the Bixby to be retrieved.)

Sure, players will likely have to resort to the manual to find answers to these questions – the game itself does not offer any real hints that F9 controls laser energy or that T cycles targets – but the mission does imply these things must exist, and it offers a playground to figure out their nuances.

The second mission of Tour I, ID Reconnaissance Mission, also eschews dogfighting objectives, since outmaneuvering TIEs requires some amount of coordinating the twitch-based skills of handling your craft with proper weapon and power management.  But there are TIEs in this mission, at least, and things trying to kill you.

This mission is simpler than the previous one, arguably, but there’s still a bit going on: with information provided by the captain of the Bixby, the Alliance knows the location of an Imperial rendezvous point where a strike force will gather for a major offensive.  In a lone A-Wing, the Alliance’s light, fast interceptor, it is your task to identify the ships in the group and then get back out.  The ships are primarily Nebulon-B frigates and Corellian corvettes, though an Imperial-class Star Destroyer arrives to cap everything off.

Where the first mission required that players learn to recharge their lasers, this mission somewhat demands that they learn they can recharge their shields (and possibly also that they can dump laser power into the shields for a quick boost).  A-Wings are small, fast, and fragile, and though the gunners on those Imperial ships are bad at their jobs, it’s hard not to take a couple hits when you fly so close to them.  Dumping weapons power into the engines completely to increase the fighter’s speed will definitely make things easier, and being able to target ships is all but necessary to verify that they’ve been inspected and find those that you might have missed so far.

Mechanically, though, this doesn’t really add any new pieces: it extends those that were probably learned in the first mission and puts them in a situation where it is very possible to get blown up.  This mission still isn’t very hard, but some of these skills need to be put to use to succeed, meaning new players, like birds pushed from their nests, will have to learn them to proceed.

Finally, everything gets put together for the first real skirmish in the game.  Alerted to the Empire’s encroaching task force, led by the Star Destroyer Invincible, the Alliance evacuates their nearby base before the Imperial forces can pin them down.  In an X-Wing once more, you are tasked with covering the evacuating craft as they head for hyperspace.

Unlike before, this mission requires some skirmishing with TIE fighters and bombers – indeed, that is principally what it is.  Defending assorted transports is important, but the TIEs aren’t quite so vicious as in later escort missions.  Also, the Invincible drops in close enough to pick off some stragglers, ensuring that certain objectives are “failed” no matter what the player does.  This mission wraps up our whirlwind education:

There are some things that haven’t become critical to gameplay by the end of this mission – ordering your wingmates around, for instance – but these are increasingly minor parts of playing, the purview of players who want to achieve high scores or beat missions efficiently.  Disabling enemy ships for capture wouldn’t appear for a few missions more, but at that point it is mostly knowing to use ion cannons instead of lasers.  Components would be mixed and remixed, new Imperial ships introduced, and of course one craft left to fly in the base game – the Y-Wing – not to mention the B-Wing in the expansions.

Yes, in some ways X-Wing does just shove you out of the hangar and hopes for the best, but it demands that you learn just a few steps at a time.  I found that a nice surprise, and perhaps one reason this series has such lasting, classic appeal.

Catch Dix between sorties at dix@tap-repeatedly.com, or on Twitter as @blueofthekin.

7 Responses to Learning to Fly