Ground Zeroes sold me on The Phantom Pain.

What people say about the length is no exaggeration: if you play exclusively for the main story, which threads the PSP release Peace Walker into the upcoming The Phantom Pain, you will probably be finished in an hour.  That’s even if you play imperfectly and have to retry a bit, which you probably will your first time out.  Enough has changed from previous Metal Gear titles that even veterans will need to get acclimated to some of the new tools and features at Snake’s disposal.  But that hour will be mostly gameplay; for a Metal Gear title, there is remarkably little time spent in cutscenes.  Furthermore, there is a lot more to do than just the main story, and the gameplay is strong enough – which is to say, pretty strong – that it’s worth doing.

Ground Zeroes sees Snake – aka Big Boss – infiltrating a US Marine prison camp in Cuba to rescue Chico, a member of his mercenary organization Militaires Sans Frontieres, in 1975.  Chico and the MSF are elements from Peace Walker, but for the most part you can get by without having played that game.  The base is sprawling and open, and there are multiple ways to reach objectives and, often, secrets to discover elsewhere.  This mission is bookended by the game’s main cutscenes, which are more or less what you’d expect from a Metal Gear Solid game. 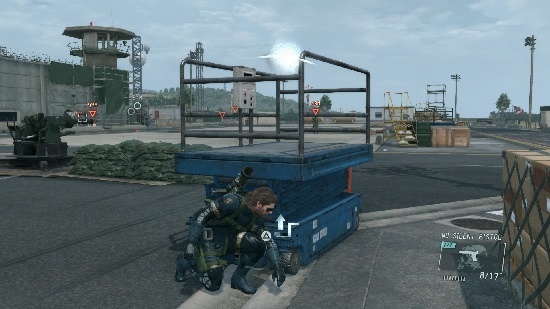 Gameplay resembles that of Guns of the Patriots, well-tuned and responsive third-person sneaking and, when need be, shooting, and for better or worse it is possible to shoot your way through most missions.  Still, the game encourages stealth, which awards higher scores and greater rewards.  Stealth is at once trickier and more engaging than before; completely gone is the radar and vision cone system that previous games struggled with replacing, so situational awareness is important.  However, Snake is helped along by the fact he can mark enemies with his binoculars, which grants some ability to track them as they move.  This functions well to not only help players make up for the lack of a radar, but encourages planning ahead and taking stock of the situation before moving.  If an enemy does spot Snake, the game goes into slow motion, and he has a few seconds to react.  Overall, it’s a solid evolution of the series’s existing systems; I always felt like I had the tools I needed, if not always the patience and skill to utilize them appropriately.

So the question really becomes, how little game is too little?  Well, the thing is, it’s not that Ground Zeroes lacks for content.  Considering its budget price – $30 for the PS4, less for a digital copy on the PS3 – the AAA production values are exceptional.  Detailed character models, well-done animation, smooth systems – you wouldn’t expect to see this kind of power in a title that released for that price.  But more importantly, Ground Zeroes isn’t really that tiny, all things considered; it just defies existing expectations for what a Metal Gear Solid game is supposed to be, but length aside that’s a really good thing.

Metal Gear Solid has always been a series that thrives on its story-driven gameplay.  Though titles at least as far back as Metal Gear Solid 2 have tried to add additional score-chasing gameplay through “VR missions,” they’ve always fallen short of being very compelling.  For the most part, the games have been done once the plot is finished, unless you want to play them again for various unlockables and secrets.  Ground Zeroes is the antithesis of this, focusing instead on creating a compelling gameplay framework and playing field to encourage repeated, exploratory play.  The story really only does enough to justify the game’s existence within the series – fans would be disappointed in a Metal Gear Solid title with no story at all – and then steps back to let players engage with the tactical espionage action playground of Camp Omega.

As Kojima said, this is one for the players who enjoy vying for higher scores and faster runs, and in that capacity there are enough moving parts and side objectives to make that compelling for a little while.  Completed your mission?  Do it faster.  Without being spotted.  Complete a side objective, kill fewer enemies, rescue more prisoners.  If Metal Gear Solid‘s gameplay is your cup of tea, Ground Zeroes offers a more repeatable experience that previous games lacked. 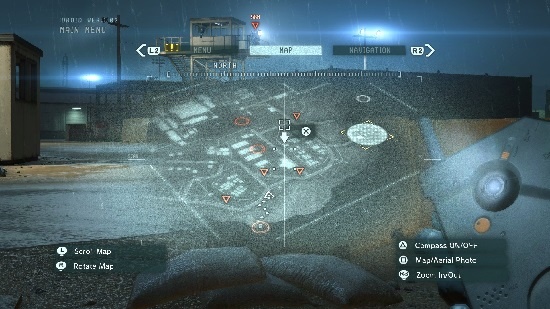 The map can be accessed via the not at all anachronistic iDroid.

More relevantly, though, Ground Zeroes sold me on The Phantom Pain.

Now, let’s be honest, I’m one of those guys who was waiting outside his local GameStop when they unlocked the doors the day Guns of the Patriots came out, knocked it out by the next day, and then played it the fuck again.  Short of some catastrophe, I was going to be buying The Phantom Pain.  But one of the concepts in the “true” Metal Gear Solid V that I wasn’t sure about was its open-worldness.  Some of this comes from my misgivings about open-world gameplay in general; I think it’s overused and most open-world games feel like they don’t offer enough varied gameplay to justify being open-world to me.

Specifically, of course, Metal Gear Solid has always thrived on its narrative thrust, and often one of the consequences of that has been a tight but fairly linear level design scheme, even though each successive title since Snake Eater has made some efforts at being more open.  My concerns with The Phantom Pain were twofold: one, that the gameplay would get lost in the concept, becoming something more like Guns of the Patriots with a bigger environment, more shooting and less stealth; and two, that the story would compete with the amount of gameplay the open-world would imply.

Ground Zeroes thoroughly proves to me that Kojima’s team is up to the task of delivering the gameplay experience I’d want The Phantom Pain to be.  Camp Omega is essentially a small open world, and it is easy to sit back and imagine it being one location on a larger map, with its entry points not exiting the mission but simply going to the world.  There are vehicles to drive around, and though you don’t really need them to get around the camp, their mechanics are likely hints of vehicular travel to come, and they handle nicely, solid and believably heavy in the case of the big military transport trucks.  There’s even some hint that some of the mechanics from Portable Ops and Peace Walker may make a return, with Snake being able to rescue prisoners by loading them into the exfil helicopter or the back of a jeep to drive away, but that’s just conjecture on my part.

Whether or not a Metal Gear Solid story can exist alongside an open-world game is still something of an open question, but Ground Zeroes does suggest that maybe Kojima has learned something about the balance from Guns of the Patriots.  I still expect there will be a lot of cutscenes in The Phantom Pain, but I am optimistic that the ratio will not be two hours of cutscene to every one of gameplay again. 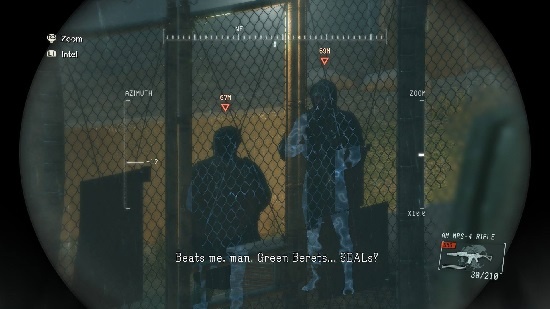 Codec conversations are largely replaced with voice over while using the binoculars.

So I really like Ground Zeroes.  But how much content do we demand from a AAA release?  If it were full price it would be a massive letdown, but it isn’t; at the same time, it feels meatier and more final than a demo would, with its replayability and, presumably, content unique to it that won’t be repeated in The Phantom Pain (although at least one major story beat will have to at least be synopsized).  Honestly, I think there’s room in this commercial space for smaller, lower-priced games, distributed standalone digitally and through retail; Ground Zeroes is not the first, though it’s probably the highest profile in recent memory.  They sit in a weird nether realm between DLC and old-school expansion pack, where the perception of value for money is kind of all over the place.

If I have one real, actual complaint, it’s that I’m not sold on Kiefer Sutherland as Snake.  He does a good job – he is objectively better than classic Snake voice actor David Hayter, I suppose – and he doesn’t deviate too wildly from what Snake is supposed to sound like.  Still, there’s something just a little too…believable about it.  In the hyperrealistic world of Metal Gear Solid, Snake’s excessive gruffness holds a certain charm in addition to its familiarity.  But then, I am notoriously resistant to voice actor change; my chief complaint about Arkham Origins had to do with the recasting of both Batman and the Joker, despite being performed by extremely competent actors, and I will probably never forgive the Transformers movies for not giving Frank Welker the part of Megatron.  (Then again, there’s a lot those movies have to answer for.)

Ground Zeroes does not pretend to be something other than a bone thrown to fans.  It is that.  And maybe it’s a test run for some of the paradigm shift Kojima has planned for The Phantom Pain.  Consequently, it’s not the must-play that a fuller featured Metal Gear Solid might’ve been, and it remains to be seen if it’s even that important to The Phantom Pain (my guess, narratively, it’s more of a teaser than an integral part of the story).  But for the right price (whatever that means to you) it’s a nice diversion, and a nice taste of what’s to come.

To contact the author, tune your codec to dix@tap-repeatedly.com!