The Walking Dead is a game series from Telltale Games. Telltale does one thing and does it well: episodic adventure games. The Walking Dead is available on XBox Live, Playstation Network, and iOS devices, but I played the Steam version for this review, and my comments will reflect a “point and click” interface.

I’m going to do my best not to spoil any of the plot of The Walking Dead games in this review. However, there may be a few mechanical spoilers, if that is a thing to you. If you’re deathly afraid of any spoilers at all in any capacity, stop reading and just start playing these games, on any device available to you. If you’re anything like me, you won’t regret it. Keep in mind, though, that if you are anything like me, you’ll have a very strong stomach for blood, guts, and games that put you in dire situations and force you to deal with them.

I waited a little on playing The Walking Dead until I had a backlog of episodes. Hence, this review will reflect the content of the first three episodes of the game. Two more are yet to come. The episodes all have their own internal plots, but the mechanics are the same for all of them. Each episode takes about three to four hours to play through. The games can be bought one at a time, or in a full season pass.

Prior to starting the games, I had no experience at all with The Walking Dead as a comic book or television show. I was broadly aware of it. But – I have a big confession to make here – I’m really burned out on zombies. I feel like zombies are boring go-to enemies for video games and don’t really have that much new to offer. They can certainly be done well, though, and The Walking Dead does them well.

I will say that I am enjoying The Walking Dead in spite of the zombies, not because of them. 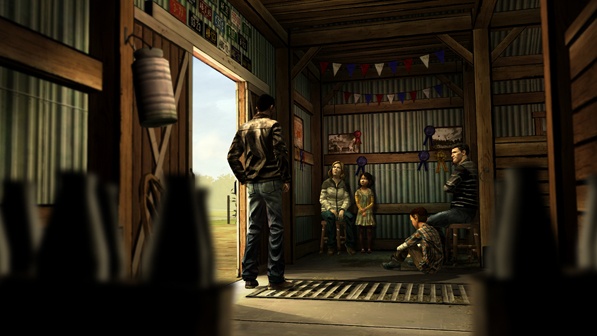 Here’s why: it’s not really about the zombies. The game is about the people instead: the survivors. Yes, even that seems like a cliché. It’s what the infamous Dead Island Trailer seemed to promise, but failed to deliver on. Serious zombies. The Walking Dead is so serious about zombies, that they don’t really call them zombies in the dialog. They’re “the Walkers.” That translates to “serious business zombies.”

But enough of the zombies. The game is actually about Lee, a history professor who has made a few bad life decisions. It’s also about the different people that he meets in his own quest for survival. Chief among them is a little girl named Clementine. Though Clem starts out as a stranger to Lee, their relationship quickly becomes an almost father-daughter one as Lee decides to protect her.

Protecting people isn’t easy. Throughout the course of the game, the player (as Lee) will have to make a lot of different narrative choices. The choices aren’t the typical kind of “moral decisions” that games often make, choices between good and evil. In The Walking Dead, it’s usually a decision between one bad choice, and another bad choice, with no clear right answer. As a gamer, I find this to be absolutely thrilling. I don’t want there to be a right answer. I don’t want to get happy-points for choosing that right answer. I want to just make a choice and deal with the consequences. This is what the game delivers, and the ability to really affect the story is the core of The Walking Dead’s premise. 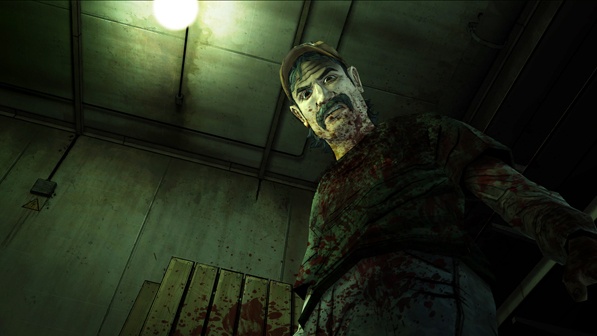 At the very beginning of the game, a black box fills the screen, warning that the game adapts to how it is played, and the choices made in the game do matter. The first time I saw this, at Episode One, I thought it was a little stark and almost scary. Why such a dire warning? The second time I saw it, I was just frustrated that the game felt the need to warn me. The game responds to the decisions I make? What a concept! This should be the bare minimum of what we expect from story-based games. That the game reacting to player decisions is so wonderful and astonishing (and it is!) just goes to show how far we still have left to go in interactive storytelling here in 2012.

The game will alert the player after-the-fact of any important choice. It could be as easy as telling a fact to a certain person in-game, at which point, a prompt appears on the upper left hand side of the screen. “Clementine will remember that.”  One can turn these story notifications off, and some people prefer that, but I personally wouldn’t recommend it. Being reminded of what you did or said has a lot of impact, and never spoils the story in any meaningful way. Sometimes, it does the opposite, in fact, and contributes to a more shocking outcome.

Aside from making these vital decisions, the game is a point-and-click (or your preferred controller or tap interface) adventure at the core. The puzzles, such as they are, are environmental in nature and not too difficult. Nothing requires a huge leap of logic; it’s mostly about exploring the environment until a solution presents itself. There are a lot of dramatic scenes that require quick action as well, things like having to click a moving target a few times, or rapid-jamming-of-a-key type Quicktime events. (Stickykeys = off.) Mechanically, Indigo Prophecy/Fahrenheit would be a very close comparison. There was one part in Episode 3 – Long Road Ahead where I died multiple times due to an interface frustration, but that was the only portion of the game I found truly difficult in a mechanical sense. 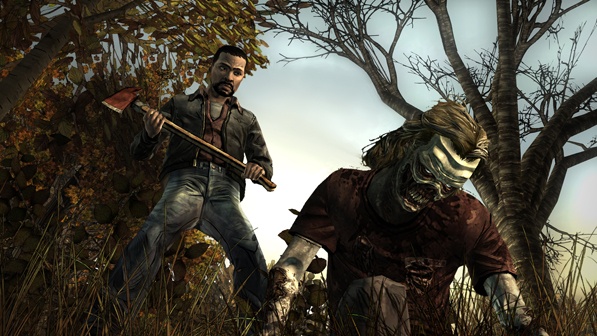 I do have to mention a flaw with the games: the art and animation are inconsistent. The game art is designed to mimic an inked, comic-book style. It works sometimes. Other times, some background objects are more detailed than others, and it makes the situation seem less real. A sketchy, scribbled-on car is pushed up against a higher-rez brick wall. A character interacts, with choppy presses, with the clearly scribbled-on buttons of a flat painting of a radio.

Facial animations are great, as befits a game about human drama. Looks of rising horror, frustration and anger, and resigned grief are all captured very well on the digital actors. But the ink-drawing style has its limits there as well. I kept getting distracted in one otherwise-dramatic scene by the fact that the tears streaming down one character’s face were so clearly painted on that they looked like kabuki makeup. Character full-body animations are a bit more glitchy still. Lee has teleported across my screen during a story scene on more than one occasion. The game also makes liberal use of invisible walls to keep actions in scope. This is fine, but every time Lee walks into one, he does this crazy, slow-mo floating walk against it. This just makes me laugh and knocks me out of any inherent drama going on around me. 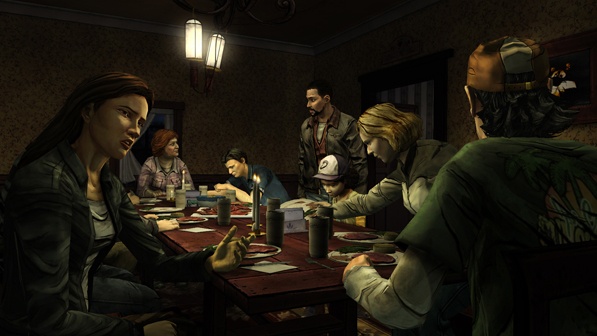 In spite of these artistic flaws, I’m giving The Walking Dead a high recommendation.  I’m doing this for the story alone, and, if I said any more than I have, I’d be spoiling the experience. I admire a game with the guts to force me to make bad decisions. The Walking Dead stars characters that I genuinely feel things about – I don’t always like them, often hate them, but definitely feel things. I also appreciate the game’s Southern Georgia setting, an area of the country I’ve visited several times which seems to be captured quite well here. Yes, the game is emotionally manipulative at times, but emotional manipulation is a craft. If you want to take actions in a game that will really make you hate yourself, believe the buzz and try out The Walking Dead.

…Or Spec Ops, so I’ve heard. Or the upcoming Far Cry 3. I guess self-loathing combined with brutal violence is a hot thing in games these days. Well, I say, bring it on. Horribly disturbing, and oh-so refreshing!

Peter Molyneaux Throws Down on Innovation