Meaning in the Dark

Closure – winner of the IGF 2010 Excellence in Audio award – remained nothing more than an apparent Alpha build, fully playable in Flash, for a couple years until it was finally given a proper release on PS3 in the spring of 2012, and later last year the same polished version came to PC. This “finished” version gives up some of the charm of the Flash build which is ultimately necessary to fulfill its visual themes, one half of its story; the other indeed being the striking yet eerie aural accompaniment.

There are no words– spoken or written– in Closure. There are no colours, either; you’ll traverse a monochromatic world with varying shades of black and white. Before any puzzle solving begins examination is warranted: there are three doors. Behind each of the doors, twenty-four sub-doors, all of them locked save the first. Maybe these are simply conveniently arranged hubs, each puzzle available for revisit at a whim. Not in my estimation; in that case why include the locked doors at all? Why not have them appear after completion? No, the closed off doors are meant to be seen. Doors within doors within doors. Metaphors shrouded in fog. As they are unlocked your avatar quietly experiences understanding. The player, however, engulfed by confusion. Answers– like the puzzles– don’t exactly come easy.

Closure sells ambiguity like it’s going out of style.

I’d be clinging onto that ball of light pretty hard, too, if I lived in Non-Floor World

Immediately after finishing the game I sought out any discussion boards which had conversations about Closure’s themes. It’s all conjecture, really. Curiously, the starting point for most discussions were names attached to the game’s trophies: “The River,” “The Factory,” “The Hospital,” “The Carnival.” From what I could tell there’s no other explicit mentions elsewhere; menu, manual, what have you. Ultimately I think this could all easily be ignored, but the same could be said for Limbo. Nothing is spelled out; it’s murky and up for debate on purpose. Though it might be considered cheap or easy, I think it’s noteworthy. It’s fine, nay appropriate, that a puzzler’s “story” is but another puzzle. You could say it’s to be expected.

Thing is, I’m still not sure about any of it. “Vague” and “abstract” don’t even begin to cover Closure’s themes, but they’re there, somewhere. I can be pretty thick when it comes to these things but I still appreciate the game’s bizarre, thematic consistency. The reason I mention story first is that it is an increasingly admired– and sought after– part of games like this – however, intriguing it may be, whatever story lies beneath the surface here is most definitely secondary to the puzzles themselves, despite their nature being carefully intertwined.

I crossed its river without much knowledge gained, but I was a hell of a lot better at mind-bending puzzles when all was said and done. 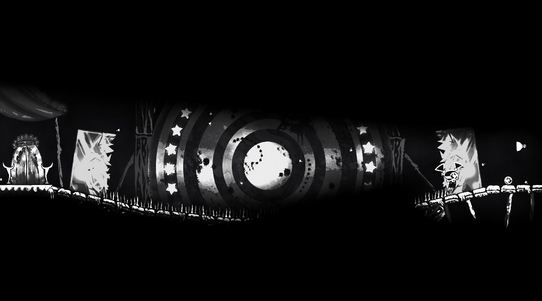 Apparently this is some kind of carnival … yeah, no thanks

Light, in the Light

Puzzles, ah yes. Closure has a few of those. 70-plus, since you ask. If you’ve seen or heard anything about the game then you know about its primary mechanic: light versus dark, or rather light versus nothing. If you can’t see it then it doesn’t exist. Not until something illuminates it, that is. It’s simple and frankly brilliant in theory; in execution the results are varying. The learning curve is fine – a bit slow-to-build if anything – however, it’s the uncertainty in knowing if your solution is correct (or best) that frustrated most often. Frequently I found myself abandoning ideas I had thought were correct (rightfully), experimenting with further unsuccessful ideas, until eventually going back to my initial puzzle work to realize I had misplaced an object by a few millimeters. Enjoyable problem solving this doesn’t make. Especially when having to seek outside help from a few YouTube videos

Occasional “environmental difficulties” seems like a small complaint but when something like that happens a few times it undermines the whole experience. I was second-guessing half of everything I did.

When the game mechanics work they’re lovely. Shuffling and keeping track of piles of light-orbs; carefully manipulating objects and life-sustaining lamps to set up the perfect Incredible Machine-like chain reaction; outsmarting the all-too-infrequent traps and hazards for a satisfying victory; all the while carefully steering each precarious footstep. Oh, riding an environmental elevator was pretty neat too, the first few times. My greatest compliment to Closure is that in obscuring giant chunks of each puzzle at a time, it flips on its head the tried and true conventions of allowing the player to carefully examine each scenario and plan accordingly. Here, this can never be done; you’ll adjust, then readjust, or probably die a bunch (which is of no consequence, of course – just a restart of the level). Like the light and nothing concept, its elegance is in its simplicity – this is Closure’s ace in the hole. 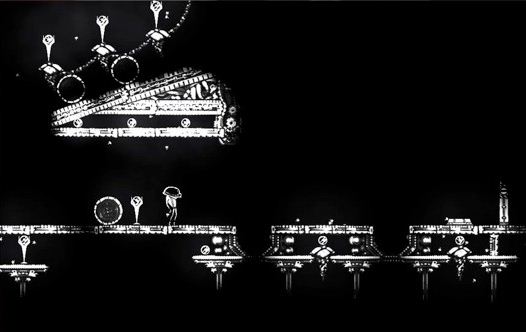 This one is dastardly

I have to say that this is certainly one of the most challenging puzzle platformers I’ve ever played– frustrations included– so if that’s something you look forward to in games such as these, Closure is sure to satisfy. Just plan for a lot of experimentation and trial and error in general. If your inclination is to lean toward less challenge, but rather a more sublime experience such as Braid, then this may not be your cup of tea. Then again, you never know if you don’t give it a whirl.

I liked it well enough, and its (admittedly hazy) themes at least bounced around my brain for a while after finishing the game, but the amount of time I spent banging my head on things was too much– compared to the amount of time spent genuinely enjoying myself– for this reviewer’s taste. Particularly because my failings were not exclusively a between-the-couch-and-TV problem. It’s a fine rainy day head-scratcher that should keep even the most seasoned genre veterans at work for several hours; however, I wouldn’t give a full recommendation to anyone without a high resilience-to-frustration level – there’s just not enough interesting about Closure, even to one driven by curiosity. Come for the challenge, stay for…more challenge. Or leave because you didn’t like the challenge. It was that damned spec of stupid broken environment that defeated me!  . . . yeah, the spec, sure it was. Wimp.

*Closure and Dark Souls have absolutely no relation to one another. Lulz. You fool.