A couple of years ago I did a rundown of some of my personal picks from the 2010 Independent Games Festival. That list was written almost entirely because of one particular game: Vessel by Strange Loop Games. I don’t know what it was exactly that I found so mesmerising about it, perhaps it was the sloshy liquid physics and the puzzle potential therein, perhaps it was the moody panoramic backgrounds coupled with (as I’ve come to learn in the last couple of weeks) Jon Hopkins’ beautiful music, perhaps it was both of these things and more, but one thing I was certain of: it was going to be a day one purchase for me.

Okay, so it didn’t end up a day one purchase, it would have done had I got wind of it sooner, but Vessel released quietly a few weeks ago and sure enough, I bought it, on its own, not part of a bundle and not heavily discounted on Steam. Get me.

Since my IGF 2010 coverage, Vessel has undergone a massive visual transformation thanks to artists Milenko Tunjic (site NSFW: boobies ahoy) and Mark Filippelli. To give you an idea of the transformation, the first trailer for Vessel — the same one that got me very excited — looked like this:

Now feast your eyes on the new one:

As you’ll immediately notice, it’s just gorgeous now, bursting with life and detail, the level of which can only truly be appreciated when the camera really zooms in (see ‘Invention Report 2 – Seeds’ video on page 3 to see what I mean). Parallax is used exceptionally well throughout Vessel but in addition to this there’s also a certain three dimensionality to surfaces allowing for light and shadow to bounce around the environments convincingly. These two effects when coupled with the immeasurably satisfying liquid physics make for a very muscular and visually dynamic platformer. In later levels where light plays a central role these effects are really something to behold together.

In Vessel you play as M. Arkwright, inventor of the ‘Fluro’, a sentient liquid automaton that has come to replace manual labourers throughout the industrialised world. Unfortunately for Arkwright, a pot catching rain water from his leaky laboratory roof topples over triggering a machine which begins generating Fluros behind his back. Arkwright finds himself locked out of his lab while the Fluros go about mass producing themselves and generally causing chaos. Sure enough, it’s Arkwright’s job to sort it out. However, it’s not long before he discovers that the Fluros are evolving in ways that he never imagined…

Strange Loop Games operate a very refreshing hands-off approach with Vessel. There’s no cloying tutorial or rubbing your face in a series of splash overlays explaining the mechanics and conventions of the game — even the controls go unexplained (they’re in the options under ‘Controls’, silly) — it’s very much a show-not-tell game or, perhaps even, a discover-not-show game.

Any sort of direct information is relayed through Arkwright’s journal which also serves as the game’s primary storytelling device, elaborating on events as you go and adorning the pages with lovely concept illustrations. Outside of the journal though, there’s very little in the way of obvious guidance. That’s not to say that the game is inaccessible or unforgiving, on the contrary, like most good puzzle games it very carefully introduces all the vitals to you, the difference being that it trusts you to identify, remember and use them accordingly. The impression I got throughout Vessel is that Strange Loop have every faith in you and that cerebral pâté you call a brain; they know gamers are crafty monkeys who love nothing more than throwing ideas around and exploring possibilities, and given the game’s focus on somewhat anarchic experimentation and invention, the hands-off approach compliments this perfectly. On one puzzle, which had me flummoxed for a good ten or fifteen minutes, I did notice the camera slowly and momentarily focus on one particular spot as if hinting toward something. “Argh! Ye gods are helping me!”. By that point however, I was very familiar with the layout of the puzzle so it didn’t help an awful lot anyway. 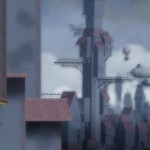 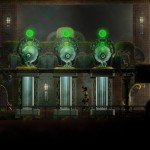 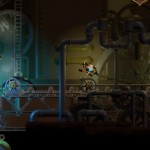 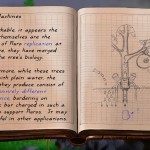 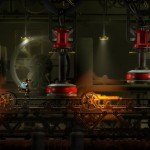 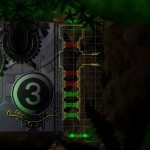 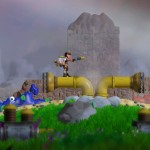 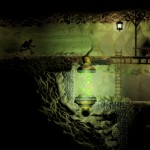