We’re in the middle of a sort of adventure renaissance here in 2012.  I haven’t played a point-and-click adventure game this year that I didn’t like. So, I decided to see if I could continue the streak, and, dug into the first episode of the new Cognition series, made by Phoenix Online Studios.

The full name of the game, as near as I can tell, is Cognition: An Erica Reed Thriller: Episode 1: The Hangman. That is too many subtitles, so I’ll just keep calling the game Cognition Episode 1 or other shortened variations. The “Epsiode 1“, of course, is because this is the first chapter in an ongoing series, which is planned to contain four episodes. Episode 1 is out now, and Episode 2 is due out some time after the holiday season.

A little background: Cognition was actually a Kickstarted game series (“before it was cool,” according to the press release). It’s made by the team responsible for the King’s Quest-inspired The Silver Lining adventure games. Gabriel Knight‘s Jane Jensen was consulted for the story, with art direction by comic artist Romano Molenaar.

Altogether the game has an interesting pedigree, though I probably would not have stumbled across it organically. The marketing material is easy enough to avoid. This is actually good. Avoid the marketing material, because, for some reason, it spoils story twists in the game. This is why I linked directly to the buy page rather than the page with the trailers and news. The game is on Greenlight, too, since games are all on Greenlight these days, but, in that case, beware of reading anything on the page. I’m far from the most spoiler-phobic person, but for a murder mystery I’d rather not know ending twists up front.

That messy business aside, what about the game? 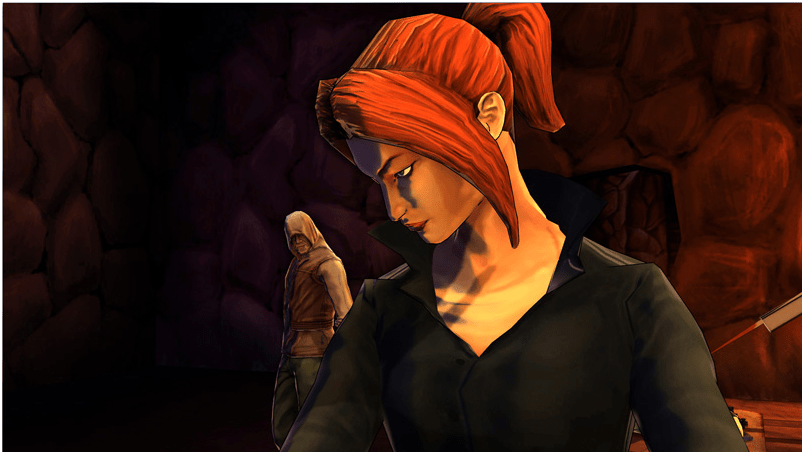 If this was an Impressions article, rather than a full review, I would not be recommending Cognition: An Erica Reed Thriller: Episode 1: The Hangman. That is because Cognition Etc. has a weak and confusing opening. The story starts with a cold open, right in the middle of the action. This is a fine idea in a lot of cases, but it doesn’t work in Cognition for two reasons.

First, the opening sequence is hugely melodramatic. Erica Reed is chasing down a murderer… and this time, it’s personal. There’s a big reason why “this time, it’s personal” usually gets saved for later in a crime drama. We don’t really know who Erica is at this point, and we haven’t spent enough time with her to feel invested in her angst. Her screaming, fuss, and self-harm all feel unearned and out of place.

Also, the opening tutorial sequence is unusually deadly. None of the rest of the game is like this, but there’s a lot of different ways to perish in the tutorial. Checkpointing is forgiving here, but, when I’m just learning how to play a game, that’s obviously the time when I want it to be its most merciful. There’s even a timed puzzle in this sequence: a mechanic that appears nowhere else in the game. Worst of all, when I paused the sequence to get a piece of paper, the clock kept ticking down.

In the tutorial we do learn the basics. The game’s heroine is actually a psion; a detective with psychic powers. She can touch objects, and get flashes of insight about how they were used in the past. Her powers develop gradually over the course of the game. This is a pretty cool mechanic that gets fleshed out as the story progresses, though it does cause some script problems as well. Erica has had these powers for years, but when she talks to a medium about them, she says she “doesn’t believe in hocus pocus.” I guess this is to provide a little dramatic resistance, but if I had psychic powers possibly my whole life, I’d at least be curious about them.

The game takes place in Boston in the modern era. Erica even has a Boston accent. Well, sometimes. It’s cute when it’s there, but feels like it drifts in and out during some of the dramatic moments. 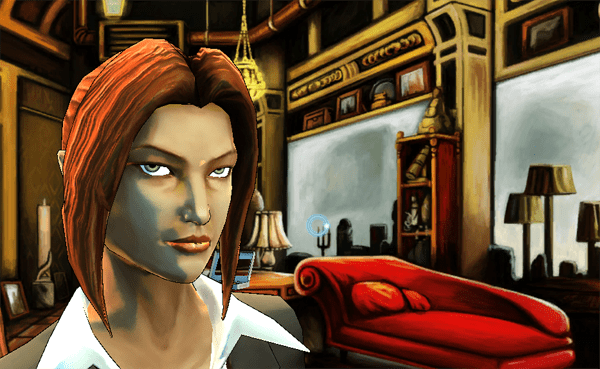 The animation in the game is a little dodgy. I’d say the biggest problem is that people walk funny. I noticed this the most on Erica, of course, because she walks the most: taking big, stompy bow-legged steps. I’m not saying a detective needs to mince around like Barbie, but her walk is really heavy and the strides are long and stretched-out. I also noticed some limbs popping out of skeletons. (My dollars to Cognition‘s donuts that this is the Biped from Studio Max at work, which isn’t terrible at all, but you really have to add a helper to the shoulder area at least or you get a kind of weird popout effect there. Animator jargon over.)

All of this happening within the first hour means the game makes a pretty bad first impression. That’s really too bad, because it’s damn solid for the rest of the runtime, which worked out to about six hours total for me.  The main game is fairly Gabriel Knight-inspired in its execution, with a city map the player can click on to visit different game locations. Playing the game opens up new locations to explore, a drill most detective adventure game players will probably be familiar with.

Cut-scenes are done in a sort of animatic style, with motion-comic panels that slide across the screen. The digital paintings with dramatic painted lighting suit the mood of the core story pretty well. They don’t always have perfect anatomy, and they get a little Photoshoppy, but it adds a human touch. 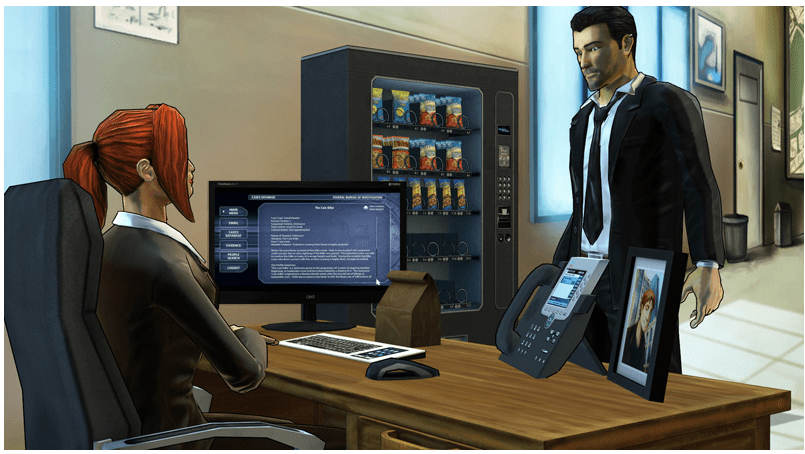 Being set in the modern era,  Cognition has an amazing inventory item: a smartphone. I was pleasantly surprised to realize that I can indeed use the smartphone for any mundane use that I could possibly use a smartphone for in a mystery-solving situation. The only complaint I have about it is that the game won’t let you explore important functions before they’re needed for a puzzle. This sometimes caused me to forget about the phone’s functions when I did need them. Is there really any harm in letting me listen to my MP3s any time I want?

The smartphone is also tied into the game’s hint system. Erica’s Dad has some detective skills too. Text him with a question, provided in a context-sensitive menu, and he’ll reply with whatever he’d be likely to do in the situation. This turned out to be a great system. Sometimes just glancing at the questions available to ask gave me the clue I was looking for. But if I did send the text, the answer I got was typically helpful without too much detail.

The puzzle solving in the game is solid (except for the one-off timed one). A sheet of paper is mandatory – the game provides an in-game scratchpad, but it’s in an inconvenient spot. I like note-taking anyway. I did hit hints a couple of times for a nudge, but I never felt bogged-down or totally stuck. The most interesting puzzle to me was an extended interrogation sequence, a multi-stage puzzle that happens around the final act of the game. I did have to be willing to get up and wander away from the man I was interrogating a few times in order to pick up items for him, which felt weird. But it came together in a story sense. 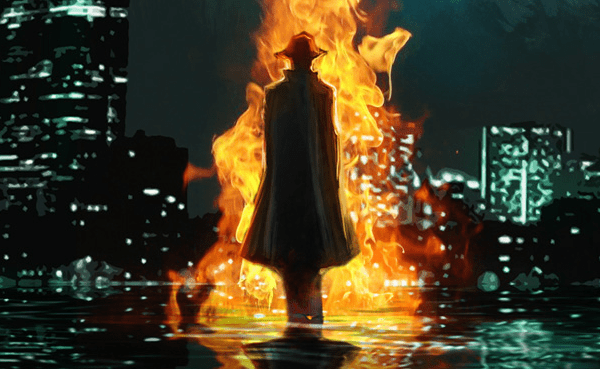 The murder mystery and its resolution work well; they’re creepy and compelling. I don’t know if I was just getting used to the game’s quirks, but the writing in the second half of the game felt much stronger than the writing in the start. Characters early on are drawn just a little too broadly in their introductions and are more likable once fleshed out.

Once I got into Cognition: Episode 1, I liked it a lot. But it took a while for me to warm up to it. What it feels like to me is that the opening sequence was created as a demo, but turned out not to fit the final game it was attached to. The smart thing to do might’ve been to go back and revise it to make it work with the rest of the game. Failing that, the developers could have at least taken out the cheap deaths, and moved the sequence as an extended flashback that happens later in the main story instead of at the start. There’s always some time constraints in indie development. But a game only gets one chance to make that first impression and some of these little polish issues would’ve pushed Cognition higher up my recommended list. The game really does hit its stride at the midpoint, though. If future episodes take after the second half of the game more, this is a series to watch.