Warning time. This is an Impressions post about a sexually explicit game. Text and images to follow beneath the jump will include depictions of sexual organs and acts. In addition, the text may be triggering for sexual violence. The article after the jump should be considered, at the very least, not safe for work.

I have a history with sex games, a history which at least two other Tap contributors are aware of! Suffice to say: I have played quite a few. I’ve tried Playboy: the Mansion, Virtually Jenna, and lots of poke-and-prod simulators. I also loved Beautiful Escape: Dungeoneer, Nicolau Chaud’s RPG about 16-bit serial killers. So I was pretty excited when I read about the Polymorphous Perversity project. It seemed to be tailor made for my sensibilities. It was a Day One download.

A couple of weeks later, I’m forced to admit to myself I probably won’t finish it. 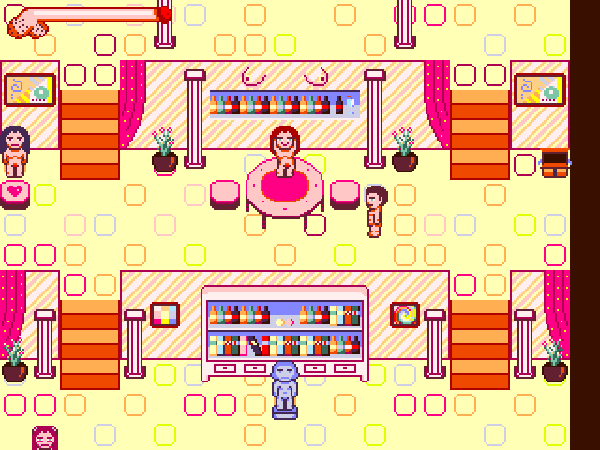 Let me start by talking about things I like about the game. The sprites in the game are retro-charming. They’re of pixellated naked people most of the time, but there’s a kind of innocence about this art style that works with the content even as it contrasts with it. There’s a harmony to the game’s mostly-warm and bright, but limited, color palette. Character portraits, made from blurry photographs, are cool in a totally silly perverted kind of way.

Chaud also has a great feel for song selection. The game uses a number of commercial (and likely copyrighted) songs, combined with actual 16-bit music from games like Sonic the Hedgehog and Final Fantasy VI. It’s an eclectic mashup, but all the songs selected seem to be solid choices for their use in the scenes. The music evokes nostalgia, and imparts energy. In particular, there’s a karaoke mix of The Bangles’ Eternal Flame used as a character theme in this game. I wasn’t aware of this until just now, but apparently I am legally obligated to sing along with this, loudly, literally every time it plays.

But lyrics like “Close your eyes – give me your hand. Do you feel my heart beating? Do you understand?” take on a different, less-romantic meaning when they’re used as the backdrop for threatening the rape of a 13-year-old girl.

So, I knew what I was getting in to with the level of vulgar content in this game. I knew it was a game exploring aspects of sexuality, including deviant sexuality and fetishes. And I don’t mind playing as an asshole in a video game. In fact, I get a little enjoyment out of it sometimes. A lot of the time. 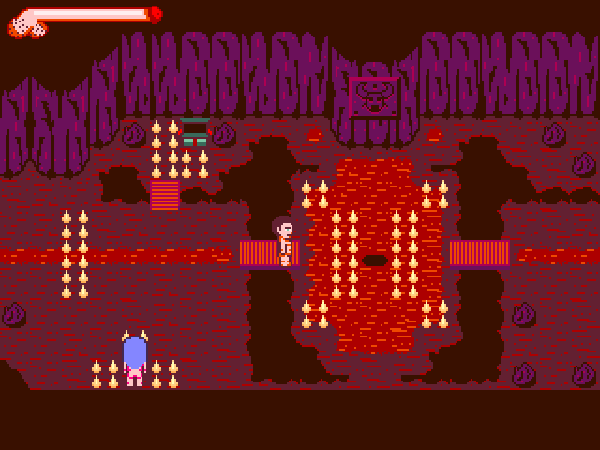 However, the problem with some of the over-the-line content in Polymorphous Perversity is that it’s unclear whether it’s supposed to be intentionally shocking (like Beautiful Escape was), or if it’s just tone-deaf humor. In the game’s first major dungeon, the player–character is confronted with the game’s first transsexual enemy. The combat screen for these enemies refers to them by the offensive short-form “Tranny.” And these enemies are placed as, well, literal “traps” for the player. The implication is essentially that transwomen, rather than being honest about their sexual identity, mostly exist to trick unsuspecting heterosexual men. This may be something based on Freudian fears rather than just a misguided joke; I don’t know the intent. Regardless, it’s presented in an offensive and problematic way.

Adam M., at Clever Musings, goes in to this in a little more detail, and also touches on the “attempted rape of a minor” sequence that happens in the game. I’m linking his review now because, I was also bothered by that sequence, and linking someone else’s writing about it means I don’t have to think about it again. For more information about what kind of content the game has from a story perspective, check out that review if you want.

All that being said, the content isn’t really the reason I’m finding the game a struggle to complete. Mostly, it’s the mechanics. 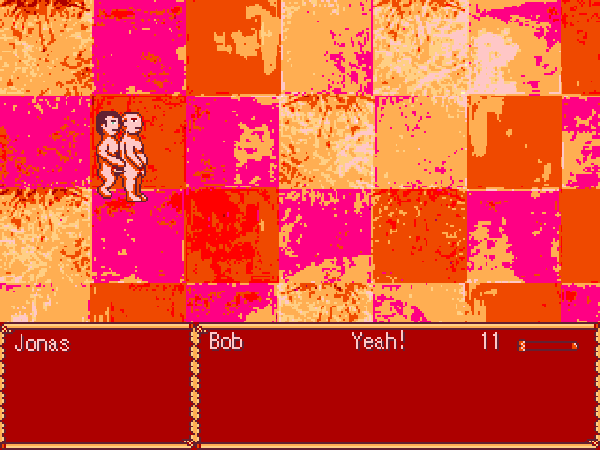 PP employs sex in place of RPG combat. Each participant in the act has a stamina meter. The object of each “sex battle” is to run out your partner’s stamina meter, before that partner runs out yours. Your sex moves drain the stamina of your partner, and also, drain some of your own stamina. There’s also a separate Trick pool (like a mana pool) for advanced sex moves. Generally speaking, imagine an RPG battle where each attack also cost you some of your own HP as well as the HP of your partner/opponent. You can rest any time to recover some Stamina, but that affects your overall performance score which affects how much XP you can get from a battle. I haven’t really gotten the hang of how to get a high performance score, so leveling up feels slow. The truth is, combat that constantly drains your own HP while it drains your opponent’s may be a fine way to simulate a sex battle, but actually doing it is kind of a slog.

The meter also constantly goes up a little, in regular ticks, in the background. The only way to get it to go down is by having satisfying (victorious) sexual experiences. That essentially means that everything – everything – in the game is timed. It’s played on a constantly ticking death clock. Exploring the environment is a challenge compounded by the need to be constantly searching for (literally) easy sex partners to keep the meter down. Only sexual experiences in the combat system count for this, so, your nude avatar might be merrily banging away in an eager girl’s mouth or, yes, a knothole in a tree, and not be lowering his horniness meter one tick in spite of this.

Money is generally not earned in sex combat, unless you choose to actively prostitute your character. This is, of course, an option, but a challenging one. You first need to earn $100 in-game just for the privilege of unlocking this option. Afterward, some sex partners are difficult enough to satisfy that you may use up several items (“Toys”) just trying to get paid, and end up losing money on the transaction. 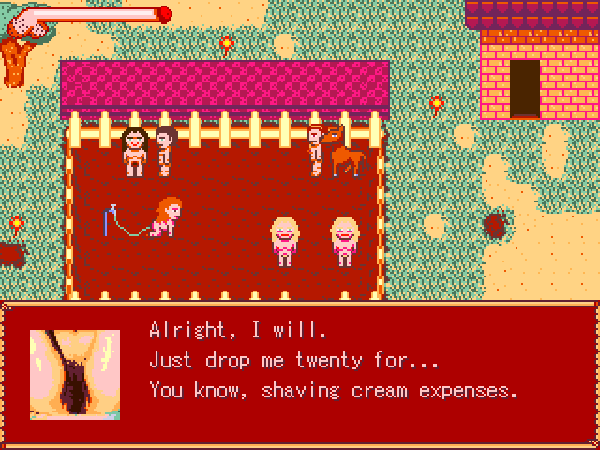 This would be less frustrating if most of the content in the game was not gated by your available cash. But most of it is. It costs money to buy enough sex toys to defeat most challenging sex encounters. It costs money to buy hookers (who are, in an admittedly funny homage, hired via the wheelchair-bound man in the Marvel Brothel). Certain NPCs will not talk to you unless you give them some money or a specific item, after which you may learn they actually had nothing interesting to offer you but a weird animation and dialog. There are also enemies that take away money as a punishment.

The most reliable way to get money in the game is the mining mini-game. It has nothing to do with sex, except for the fact that your avatar is naked (as always) while doing it. Really it’s a basic color-matching game. I may just be doing it wrong, but I can usually earn maybe 7 – 10 dollars at a shot in this game. Earning money reliably becomes a matter of doing the mining game maybe five times, then, when the horniness meter hits a critical point, going to find the easily-laid girl that stands in the middle of town to get the meter down. Then go sleep that encounter off (which costs money), and go back to the mining game again. 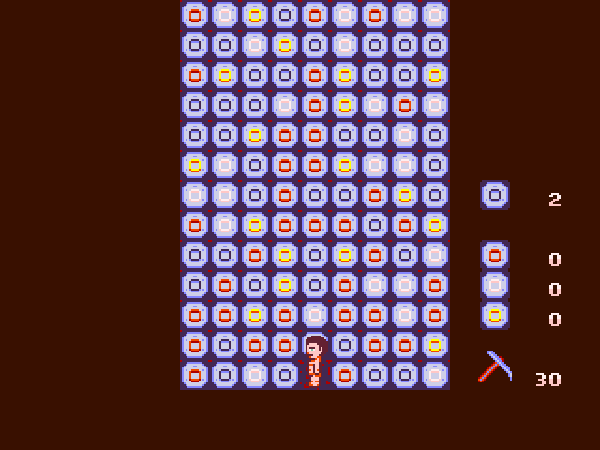 Of course, I don’t think the game is supposed to be sexy. It’s too frank, sometimes too clinical, and other times too cruel. There’s the occasional hot and steamy chunk of text describing a tight wet something, but that’s the closest that Polymorphous Perversity actually gets to titillation. The game’s tone mostly vacillates between really silly, and kind of distressing, without much in the middle. The visuals are of course pure camp: boob-covered trees, dick-plants waving happily in the wind. And some of the jokes do hit as intended, like the Pokémon-like way your character picks up new sex moves (“You Learned: Hand Job!”)

I really am the kind of gamer who will fight my way through dull or broken mechanics to get to a good story. Polymorphous Perversity has at least a weird story, and some interesting moments, but I’m not sure that is enough to keep me interested in it to the end. If it were just a game about dick jokes, I’d say, grab it tightly and yank, but, as it is, I don’t think I can really get it up for this game anymore. Though admitting that was really hard.