Out of boredom, to help a friend, or in the sense of pure exploration, I occasionally play social games on Facebook. Technically, I’m among the correct demographic for them, except for the part where I’m a self-identified gamer.  So checking out the trends in these games is a matter of interest to me.  Often these social games have some element of crop-growing or gardening in them, which seems to be capitalizing partially off the major success of Zynga’s FarmVille.

The simplest crop to grow in FarmVille is the humble strawberry. In FarmVille, strawberries take four hours to mature.  In CityVille, you’re also presented with the option to farm, as a way of funding your city.  This is a game I’ve played off and on for some time, so I’m familiar with its crops list. The first crop you plant is also strawberries.  But, in CityVille, since it has a decreased focus on farming, the strawberries grow in a quick five minutes.  Via Actionbutton.net’s extensive review, I discovered this weekend that the first gardening crop you plant in EA’s social venture, The Sims Social, is strawberries.  Strawberries in this game also grow in five minutes.

The question I would therefore ask social game developers, if any should happen to wander by, is: why strawberries?

This isn’t just limited to EA and Zynga.  In Digital Chocolate’s Zombie Lane (which is more hardcore than the other social games, because it has zombies), one of the game’s explicit goals is to grow and gather food.  You’re under duress and trying to survive.  It’s only natural that you would want to plant a food that would grow in, say, five minutes. 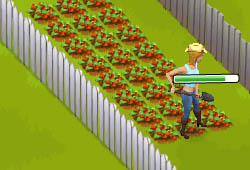 Here is my avatar planting some strawberries. 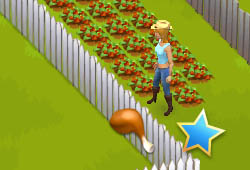 When she harvests the strawberries, some chicken pops out. Okay!

Later on I will receive a quest to grow more strawberries.

I have two hypotheses about the ubiquity of strawberries.  The first is that, perhaps, Zynga just happened on strawberries as a first crop at random, during the development of FarmVille, then stuck with it.  Other social game developers, knowing that their target audience fears change and decision-making, decided therefore to make strawberries the early standard in their games as well, to ease in new players.

However, because I know that social games are based almost entirely on player metrics, every chart and diagram analyzed to death, I like to think that strawberries aren’t just a random choice.  Perhaps somewhere in the design document of every developing social game, there is a mathematical formula that proves that strawberries, and only strawberries, must be the five-minute food.  The metrics all line up.  They’re bright, cheerful and attractive.  They’re bite-size, which might lend well to the concept of a quickly-growing crop.  They’re sweet and they’re good for you too!  We brought in a panel of ordinary consumers to test our game and four out of five preferred strawberries!  This message brought to you by the Social Game Council for the Advancement of Strawberries.

Any other examples of this?  Anything that bucks the trend?  In Candy Dream, I planted chocolate bar trees, but in that game real fruit isn’t anywhere to be found.