As it turns out, I’m only about an hour down the road from Cipher Prime Studios. They’re the studio responsible for such inventive music-based puzzle games as Auditorium. I was fortunate enough this week to get a demo of their brand new game, Splice, which was released today on Steam.

Splice is a beautifully realized puzzle game with a simple premise. Onscreen, you will see an abstract form, which looks like a floating strand of bacteria. The individual cells of the bacteria can be moved around in specific patterns, attached to other cells in certain patterns. The goal is to change the shape of the strands so that they match a specific form, dictated by a white outline around each shape.

A picture will probably help. 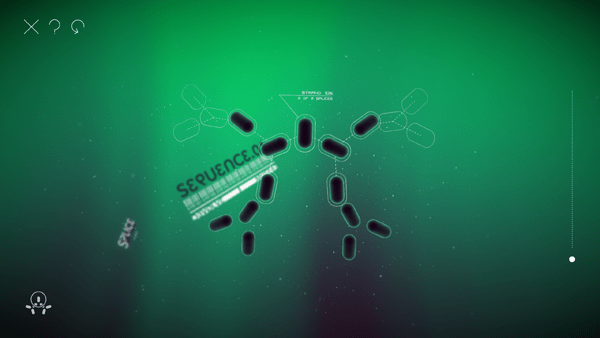 At first, splicing the strands isn’t too difficult. But as the levels get more complex, new wrenches are added into the gameplay. A particular type of cell will cause the DNA to split into two identical paths. Another type of cell will destroy itself, and any cells below it, with a click of the right mouse button. With every strand, the player can perform only a limited amount of splices. Arranging the cells to match the mold takes some planning ahead.

The game has simple but attractive graphics, with vibrant colors. A depth-of-field effect pushes previous menus out of focus, making the cells seem small, as if they are really floating about in some microscopic bloodstream. The audio is also a big part of the experience: soothing piano that makes these drag-and-drop acts of science feel careful and delicate. I found myself regretting any time I made a mistake in the splice sequence, since that meant using the rewind bar at the right side of the screen and interrupting the soundtrack with a rewind effect. 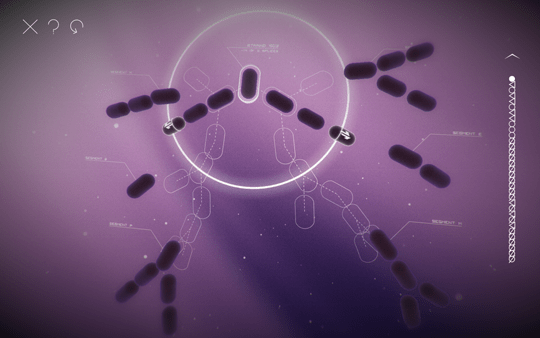 Like in the studio’s other titles, the UI is fairly minimalist, so it may take a little while to figure out how to interact with it, and how the pieces want to connect. But trial-and-error is very easy, and the rewind button makes the game forgiving enough that anyone can solve puzzles at his/her own pace.

My demo build isn’t the entire game, and I’ve been told the puzzles get really difficult later on and require excellent spatial awareness. One thing I wish Splice had is the ability to skip a difficult level and come back to it later. For a while, I was stuck on an early puzzle with no way to progress, and that lead to a moment of frustration before I finally had the ‘ah-ha.’ Some of the puzzles get hard enough even in the regular levels that I’m betting the final levels will be sadistic. … In a soothing, comforting way.

For an example gameplay video, and more info, check out Splice on Steam. While you’re doing that, I have to just try one more strand…