At art college, and all the way through school, I hated collage. For those unfamiliar with the term, ‘collage’ (not unlike montage) is a technique that involves the artist or haphazard chaos wizard using pieces of printed/paper media to create an image. These pieces can be taken from anything, from glossy magazines and newspapers to much loved photos and relatively unloved toilet paper. I hated collage because it was fiddly and, depending on your media and whether you were cutting or tearing it up, a pain to control the size, shape and colour of your mark-making. It was a loose and bitty way of working and produced similarly disjointed results, which perhaps explains why I love the look of And Yet It Moves (AYIM), an odd little platformer originally conceived and developed by students at the Vienna University of Technology.

When I think platformer, I think of grids, axes and regimented rows and columns of solid surfaces; AYIM is fundamentally a platformer but thanks to its torn paper collage aesthetic, it manages to avoid all these things. It’s a peculiar handmade world of rolling shapes and textures supplemented by sparse but fittingly unusual music and sound effects, apparently created solely using the sound designer’s own voice — which is just brilliant. 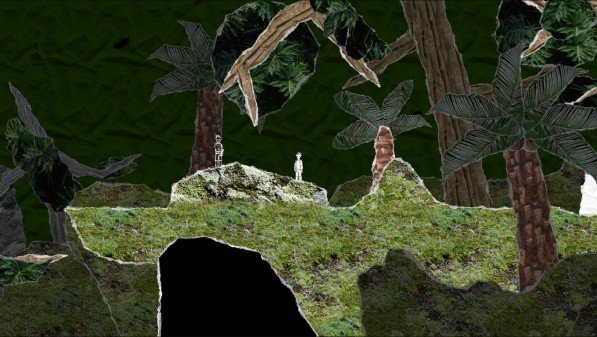 There's a lovely sense of depth to certain areas thanks to some effective layering and parallax.

I think I played the prototype of AYIM back in 2007 (the year it was an IGF Student Showcase Winner) and I later played the demo when it was released as a fully developed title in 2009, but despite enjoying the game’s core mechanic I never felt compelled to investigate the game any further. So what changed? Well nothing really, I just inexplicably had an urge to play it and conveniently it recently cropped up in the Humble Indie Bundle.

AYIM’s core mechanic revolves (no pun intended) around the ability to rotate the world in 90 degree increments shifting gravity in the process, allowing the game’s nameless paper cutout character (who I’m going to call ‘Jot’ from now on) to traverse the hazardous world. Saying ‘hazardous world’ is perhaps a little misleading though, because, while the world is indeed dotted with danger, the game’s biggest hazard is you, the player.

Swinging the world left and right and throwing Jot up and down is great fun, but with great power comes great responsibility. Jot is fragile and easily broken; if he reaches a certain velocity after falling for too long then it takes a small miracle to slow him down enough to stop him smashing into pieces on impact. You could call it Jot’s terminal velocity. It’s this fragility which makes AYIM so tricky and its physics puzzles so clever; you can’t push Jot too far; he’s got to land somewhere before gravity speeds him up too much, so all your manoeuvres have to be measured: keep him in the air for too long and he’s going to break the moment he hits anything. There are also claustrophobic moments where the space around Jot is so tight that rotating the world in a certain direction will snap him. Eek! Thankfully, AYIM features a plentiful supply of checkpoints meaning that your scattered paper appendages are never too far away from being reassembled.

The game takes place across three different environments, starting you off in a cave network where the fundamentals are steadily introduced. Over the course of 17 breezy and tightly designed levels, various mechanics come and go: from tumbling boulders, bamboo springboards and fire, to vine swings, platforms that disappear at certain angles and lizard-pestering bats. Much like Super Mario Galaxy, there are a glut of great ideas here that aren’t lingered on for too long, which is great if you’re not enjoying a section but equally as maddening if you are. For example, my favourite parts of the game are when you have to control two instances of Jot simultaneously, one normal and one a shadow of sorts that reflects your movements (so walking left makes him go right and vice versa). The aim is to get both Jots to switch positions with each other, which is easier said than done.  To further complicate matters, gravity is often reversed for your shadow. Unfortunately, these sections are introduced in the latter third of the game and as such they never quite hit their stride which is a real shame because they were immensely satisfying. 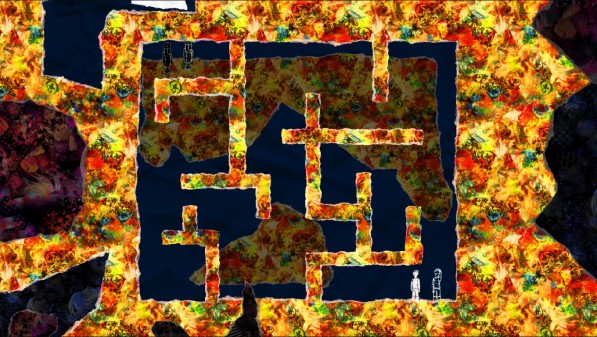 Note the shadow figure in the top left. These sections were terrific.

And really, that’s my only criticism: that some of the great ideas don’t stick around for long enough. There were certain moments where I got a little hot under the collar but the gentle patter of the game and the forgiving checkpoints choked any frustration I had in an instant. For a two or so hour long experience I couldn’t recommend And Yet It Moves enough; it’s a beautifully presented little game, full of great ideas and really quite unlike anything else.

Also, if your Log of Shame score is unnervingly high then there’s another reason to give it a whirl.

Update: a papery figure by the name of ‘Andy’ came swinging by the comments earlier to tell me his name wasn’t Jot. Sorry Andy!

11 Responses to And Yet It Moves