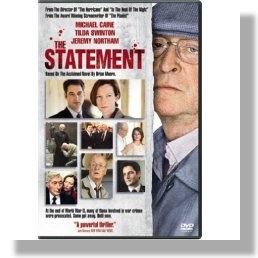 “The best part of the film, by far, is the performance of Michael Caine. His character is an unapologetic racist, a self-serving, violent, manipulative, pathetic, despicable whiny bitch. And you can’t take your eyes off him.” 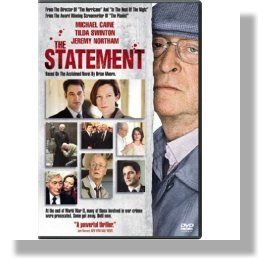 Norman Jewison has directed more than a few universally admired movies in his time. Does In the Heat of the Night ring a bell? Fiddler On the Roof? The Thomas Crown Affair? The Dogs of War? Moonstruck? All Norman Jewison films. Though he was pretty prolific in his day, Jewison’s output has slowed lately. Even so, he released Hurricane in 1999 and Dinner with Friends in 2002, both well received movies. His last feature film,The Statement, hit the theaters in back in December of 2003. It’s a politico/religious thriller starring Michael Caine, Tilda Swinton, Jeremy Northam, Charlotte Rampling and Alan Bates. The screenplay was written by Ronald Harwood, who won the Academy Award for penning The Pianist. Despite The Statement’s pedigree, it was almost universally panned. Because of the terrible reviews I took a pass on it until recently, when I plucked it off the shelf of my local video store. So much for terrible reviews. This movie is wonderful.

Caine plays a man called Pierre Brossard, a member of the “Milice”, the militia wing of the collaborative Vichy government in Nazi occupied France. Brossard was directly responsible for the execution of seven Jews in Rillieux-la-Pape, France during the Nazi occupation. The film was based on a same-named thriller by Brian Moore who in turn adapted from the real life story of the Vichy collaborationist  Paul Touvier. I wasn’t expecting much and was fully prepared to turn the movie off and instead go with my first pick for the evening, Pixar’s newest release, the charming Wall-E. To my surprise I was engaged and entertained throughout the movie. Why, I wondered, had the critics tore this little gem apart? What was it that brought a gigantic thumbs down onto this latest Jewison effort?

First, a quick synopsis. Caine’s character, Pierre Brossard, collaborated with the Nazi’s during WWII, and was instrumental in, among other crimes, rounding up seven Jews and having them executed via firing squad. After the war, Brossard escaped his own execution, slipped through the net and successfully eluded capture. He married and eventually managed to get a pardon from the French Government. Then his case was reopened, his pardon reversed and he was forced to go back on the run. He hid successfully for years through the efforts of shadowy right wing groups within the French government and the Catholic church, staying on the move, scampering from monastery to monastery, collecting envelopes of cash for his living expenses. At the movie’s start, he is finally being run to ground, squeezed between the French justice system on one side and a circle of Israeli assassins called the Jews of Domeby, on the other. The title, The Statement, refers to the typed letter of death sentence the Jews of Domby leave on their victim’s bullet riddled bodies, sort of like the playing card Robert Duval’s character leaves on dead Viet Cong in Apocalypse Now. It’s a race between the two factions to see who gets to Brossard first. 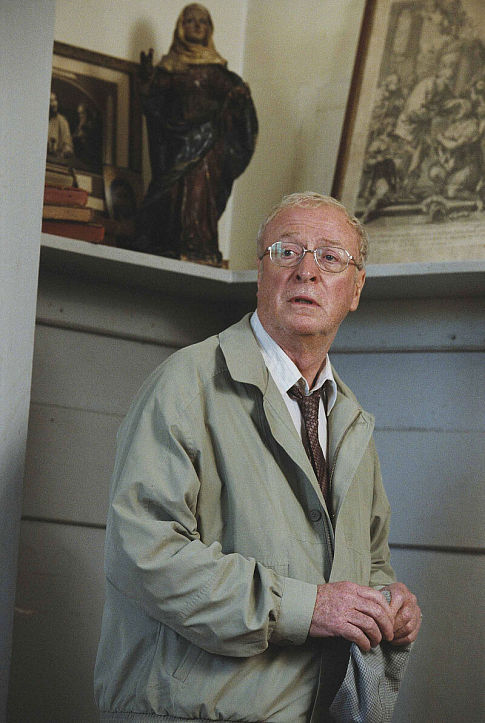 The best part of the film by far is the performance of Michael Caine. His character is an unapologetic racist, a self-serving, violent, manipulative, pathetic, despicable whiny bitch. And you can’t take your eyes off him. Michael Caine has made his name playing charming, suave characters with few scruples who have a hidden ruthless streak. In The Statement, Caine drops the suave act and goes with ruthless all the way. He is a remorseless killer one minute and a sobbing sinner begging the nearest priest for absolution the next. You are compelled to watch Caine’s attractive/repulsive character much the way you would a train wreck in slow motion. He uses everyone around him, including his estranged wife, played with perfect understatement by Charlotte Rampling. When she hesitates to give him refuge he threatens the only thing she has left in the world, her dog, while piously proclaiming in the very next breath that in the eyes of God they are still husband and wife. The French judge obsessed with bringing him to justice is played by Tilda Swinton and she inhabits this role much in the same way she inhabits most of her roles, with authority and ease. She is convinced that an important and high up French government official, someone she has dubbed “the old man”, is covering for Brossard to keep him from talking and implicating men who have risen to power. She is hell bent on using Brossard to get to “the old man”. Brossard’s shadowy allies have their own motives and ever changing allegiances that sometimes even appear to align themselves with the vengeful Jews of Domeby.

I found the movie very watchable, the cinematography by Kevin Jewison (Norman Jewison’s son) fresh yet unobtrusive, the acting solid all around, the editing pitch perfect and the writing pretty good, though at times it did tend to meander. So why all the hate for The Statement? I can think of several reasons.

Some people just can’t stand it when film makers and novelists take liberties with actual historical events. Read the reviews of any one of several Oliver Stone movies to see how little sense of humor the more literal types, especially journalist, have when someone encroaches on what they obviously consider their turf. Which is sort of amusing considering how often they unknowingly wander into fiction themselves. Another reason is, no doubt, the subject matter. It’s a loaded subject to say the least and the Catholic Church’s performance during the Nazi occupation of France does not come off in a good light in this movie. Jewison also decided to use all British actors to play the French characters. Everyone converses in proper English and admittedly it does get a bit jarring at times though this is a long tradition in film making. See The Pianist, for just one example.

And then there is Caine’s performance. It is so nuanced and subtle that it’s sometimes hard to know what to feel about his character. Simultaneously liking and hating someone tends to trigger a howling cognitive dissonance in one’s brain, as anyone in a conflicted relationship can attest. And then there is the slippery plot line where seemingly opposing forces might not be so opposing. Points of view shift, loose ends dangle, and there is no certainty as to who is right and who is wrong. This plot allows for a lot of ambiguity and in 2003, tolerance for ambiguity was probably at an all time low. Black was black and white was white and evil characters could not possibly be allowed to believe that their actions were justified.

The gist of most bad reviews was that The Statement did not satisfy on any level. Now there are people who make a point of subverting expectations but Norman Jewison is not one of them. He is a what you see is what you get type of director and he gives us this? And before you think I’m gleefully pummeling a few egghead critics, this movie’s domestic total gross was just over 767,000 for a 27 million dollar budget. No, critics and viewing public alike kicked this poor puppy to the curb, down the street and into the celluloid landfill at the edge of tinsel town.

The Statement obviously has something for everyone to hate but what any of that happens to be completely escapes me. As you can see I gave it a thumbs up and encourage anyone looking for a couple hours of intelligent diversion give this one a shot.

5 Responses to The Statement