Of the few forums I follow with fervor, I happened to be at the Maniaplanet Forums at exactly the right time when one of the devs started playing the dev-titled “stupid games” to give out beta keys to test Trackmania²: Canyon (“Canyon”). It was really a fluke, and as I entered the first beta round I knew I was an interloper. I have beta tested countless MMOs. This was different. I felt instantly out of my element even though I play Trackmania nearly every day, even if only for 5 minutes. These are my beta impressions of Canyon.

There was only one way to really race (apart from the map editor) because solo play was turned off for early beta testing. Nadeo set up a server early on with a few maps from the convention tournaments. I instantly recognized one or two from the Dreamhack videos. The early beta testing community went to work as new maps and servers started to pop up. I felt so fortunate to be able to watch a community start from square one. I saw servers go from “we’ll use every map available” to a specific map type like “shorts” or “tech” as map makers continued to churn out racing canyons. I saw map makers start out making slap-dash maps, and within a week or two they seemed to understand the physics and gameplay enough to make some really nice maps.  I was seeing a genesis.

The environment itself is beautiful. I love that Nadeo starts with each environment having a simple base, but they then add small artistic flourishes in the environment, like grounded jumbo jets in the Island environment of Trackmania. In Canyon they took the flavor of super-structure dams and treacherous canyon-side paths and turned them in to track pieces. The squared “arena” blocks provide an alien, megalithic contrast to the organic canyon walls. The props, such as the desert evergreen forest and the water towers, are also tightly controlled to provide a specific aesthetic that feels like a stainless steel industrial-type community surviving in a vast, unforgiving desert biome. My one small criticism is even though so many tiles and props are evocative of water, such as the piping system props, the lack of any canyon-style flowing water is sorely missed. I would have loved to see a waterfall or white-water rapids tile, and I hope that as the Maniaplanet engine evolves, Nadeo will add running water to the games.

The map editor is fairly simple as the maps are created using a tile-based palette for the environment. I spent a good amount of time in the map editor because the only way to solo play a map of my choice was to race through a map in the map editor.  There are three-basic road types: race, main, and arena. Race road is a wider, stadium-styled road that allows for higher speeds and larger drifts. Main road is a two-lane expressway that requires tight-handling and carefully controlled turns. Main road also seems to have the most corresponding tiles with roads etched into canyon walls and tunnels going through the bedrock. Finally arena tiles give the wide-open spaces to drift and wall-ride to a heart’s content on huge concrete blocks. There is one looping tile for the main road, which is nearly impossible. 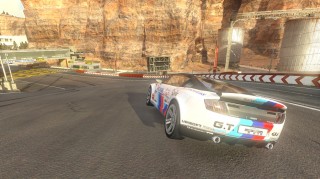 So many comparisons have been made to which amalgamation Canyon‘s car physics are in comparison to all the older Trackmania environments. Instead, I will attempt to describe it another way. The Canyon car is fast and loves to drift. However, the Canyon car does not like to fishtail, and it will grab the road coming out of a drift as soon as it can. The Canyon car is a tad top-heavy, and riding a turn on two wheels is not uncommon. The bottom line is that the Canyon car is fun to drive. It feels responsive, but without punishment for doing extreme things. I have to say that Nadeo struck a great compromise between arcade-style driving and simulation-style driving. Still Canyon is a Trackmania game and arcade-style pulls ahead. This is a great beta tester video to see some pretty decent driving, and this is a fan-made trailer with some nice freestyle.

Overall, I think Canyon is a great game and the potential is amazingly high if the community fully enables the game. For the price of admission (~20 €), I would say this is a pretty good buy, and I haven’t even seen solo mode. My one blind-spot in this future soothsaying is the Maniaplanet system itself, which will eventually contain a first-person shooter (ShootMania) and role-playing game (QuestMania). My gut feeling tells me Canyon is almost like that lone flagbearer charging over the hill before the camera pans up to shows the army rushing behind. We just won’t get to see that army until next year. Shootmania: Storm is rumored to appear in February, 2012, but Canyon is coming next month in September, hopefully to all favorited digital distribution platforms.