One thing he is not is well-disciplined. So though I did stick to my guns and refuse to pre-order Fate of the World on Halloween, it is me you’re dealing with… I bought it a few days later. Now, I still have an issue with this game costing £19.99 for the full version (that’s about $40-$50, depending on the exchange rate). Vic Davis of Cryptic Comet Games doesn’t charge commercial-off-the-shelf prices for his games, which when the day is done are quite similar to Fate of the World, only infinitely more sophisticated.

But Fate of the World is currently £9.99 for the pre-order, which gets you the beta, which is one scenario of five included in the full game. And since I have an iPhone app that can beep-boop me when exchange rates reach a certain predetermined point, I just told it to do so when the British Pound slipped into a valley. Thus I got Fate of the World for $16.

A strategy game, your role in Fate of the World is that of chief of the GEO, a new global organization put together hastily by world government, and given immense power to stop the specter of climate change. The scenario included in the beta, Oil Crisis, has you tasked with preventing a three-degree rise in global temperature before 2120.

To accomplish this, you deploy agents into regions of the world and play “cards” on them – cards are essentially actions you can take, from encouraging the development of more advanced nuclear power options to funding black ops in a region in order to take down an anti-environment government. You don’t draw cards at random; your hand is based on what you’ve already done in each region and any immediate crises that threaten it. Thus you need to look at news reports, area demographics, and statistics like local unemployment, sickness, birth rate, and – of course – emissions and energy dependence to make proper decisions. 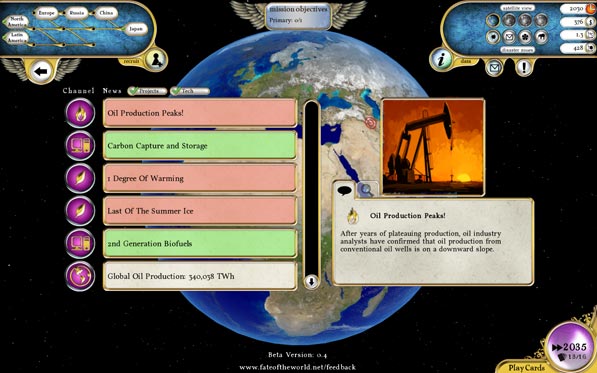 Oil Crisis is all about the world’s hunger for black gold, and assumes the (likely) possibility that there’s a finite amount of oil on the earth, and we’re nearing a peak production. So you have to scramble to switch as much of the world as possible to alternatives before the oil runs out, the economy collapses, or the ice caps melt.

I’ve played four games of Fate of the World now, and though I’ve gotten a little closer every time, I’ve never really gotten close. The game does an excellent job of clarifying the corner into which we’ve painted ourselves, and how hard the solutions are going to be. For example, “Switch to Electric Vehicles” is an early card – at a cost of $50 billion per region – and with a 5-15 year adoption time. Seems like a good way to reduce emissions and cut oil use.
Electric vehicles aren’t magic. They just use electricity instead of gas.

Where does electricity come from? The wall.

Where does the wall get its power?

How do most power plants make electricity?

So while the electric vehicle seems like a delicious solution early on, all it really does is octuple your coal emissions, and coal is far, far worse than gasoline. But it does get you off oil, which is part of your objective here. 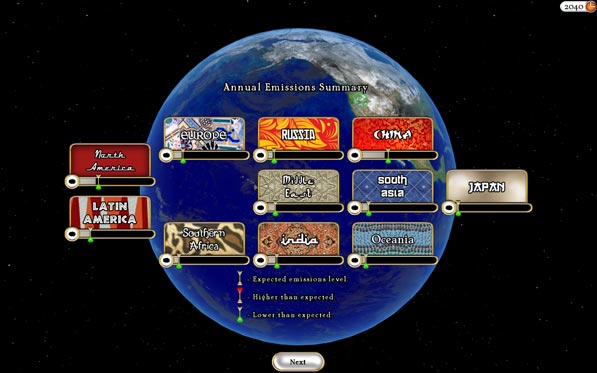 What about biofuels, then? We’ve all heard of those. Corn- and Soybean-driven cars and stuff. Yes! Let’s do that!

People eat corn and soybeans, and if you divert too many of them to production of woefully inefficient biofuels, people will starve. In fact, that’s been my traditional problem in most games of Fate of the World: things are going well until the biofueled famines begin. 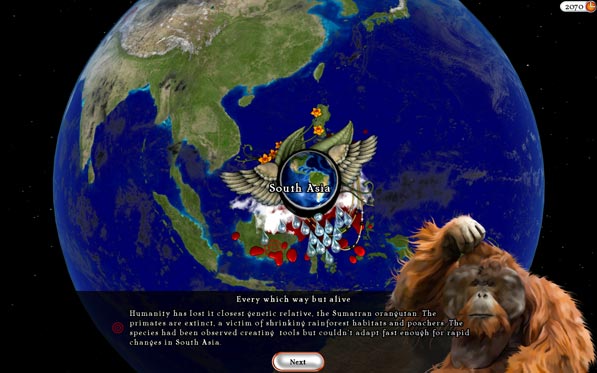 Ultimately, the lesson of Fate of the World is that the global ecosystem would probably recover pretty quickly, so long as humanity weren’t a part of it.

And as such you find yourself starting wars, ignoring famines, inserting special forces, looking the other way when genocides occur. Each “End Turn” gives you a breakdown of emissions, love for the GEO, and population… which I personally was pleased to see fall rather than grow. The more people died, the fewer to fuck up my plans for the planet.

But it’s a free world, and regions can boot the GEO if they’re unhappy with your decisions… meaning you cannot deploy agents in those regions, can’t play cards there, and can only watch helplessly as they sink into oblivion. In regions you control, enacting unpopular policies will very likely lead to your agents getting kidnapped and murdered, a costly negative since agents cost a fortune and by Turn 3 your money is running dangerously low.

As in X-COM, you have to play the political game to survive. My worst failure in Fate of the World was my first, when I tried to start with the most underprivileged regions. I stopped deforestation in the Amazon, I got China off its coal glut; I was even in the process of turning Africa around. But meanwhile, North America, Europe, Russia, China, and Japan were horking globs of black soot into the air and the temperature was skyrocketing. Plus, while those suffering regions loved the GEO, the so-called “First World” did not appreciate funding my efforts. The whole thing collapsed by 2080.

Most recently, I did the opposite – I ignored India, the Middle East, South Asia, Latin America, and Africa. I focused on the industrialized portions of the world, doing all I could to bring the planet’s biggest polluters into line. I also taxed the bejeezus out of them for extra cash. 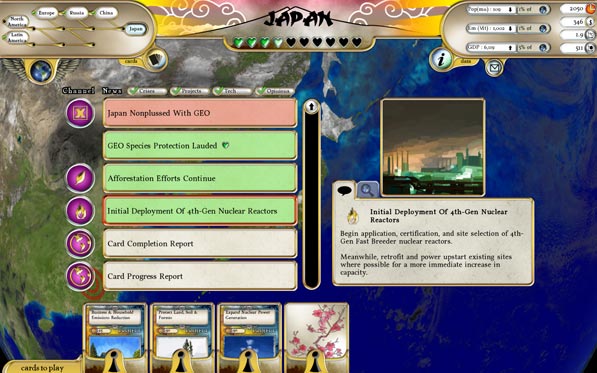 I slashed vehicle emissions, transformed most of the world from a coal-burning monolith to a great adherent of clean, safe, efficient nuclear power; I instigated home-and-business greening efforts, boosted the use of solar in homes and offices, ran a number of successful ad campaigns to convince people the GEO was good, banned the mining of oil from Canadian Tar Sands, forbade the use of shale oil, and instigated investments and job-sharing in first world regions that were a bit tattered by my many reforms. Sure, the GEO was banned from operating in Africa, South Asia, Latin America, India, and the Middle East, but I’d intentionally ignored those regions.
Besides, bans are temporary things. They’d let me in later on. And they did.

Just around the time I was so low on money that I couldn’t even hire agents to deploy in those regions. So one turn later, they banned me again, the bitches. 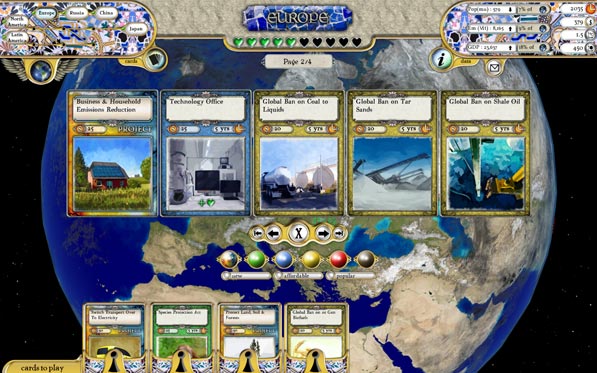 It’s a fascinating game, if technically and mechanically still a little behind the curve.

For example, Fate of the World offers you an obscene amount of information, provided you know where to click to get at it. You can track emissions by type, you can track unemployment, sickness, population, and a zillion other things. There’re charts and graphs that would make even the most anti-Excel luddite happy. Because you must not randomly choose cards and actions; you have to act based on information. If a species is in danger, you’d better freakin’ play a card to help it. If water is contaminated, you’d better freakin’ play a card to purify it. If wildfires threaten… well, you get the idea.

Unfortunately the game’s interface, while generally good, makes it difficult to compare things. At the risk of adding more to the main game interface, I can’t help but think that a nice, X-COM-like hub screen (after all, both games have a movable globe as their core screen) would help immensely. Fate of the World is full of graphs and charts about emissions and unemployment. This stuff is important, but…

I need a system by which I can see what I’ve already done and what that’s led to, region by region. Not available.

I need a system to track relative approval for the GEO for all regions on the same screen, plus information on why I’m gaining or losing popularity. This data’s all available, but it’s not coordinated onto a single Approval page. So it’s very hard to follow and remember.

I need a tech tree. If Card X leads to Cards Y and Z, it’d be helpful to plan ahead. Not available.

I need greater explanation of positives and negatives of the cards I play. If not specific numbers, give me clear definitions of what second generation biofuels will do to the region’s agricultural economy. Not available.

I need additional ways to raise funds, a la X-COM. Taxing and waiting are simply not enough.

Oh, and it would be nice if the game played on my primary, not my secondary, monitor. Why it does this I do not know.

Fate of the World is actually quite intriguing. And hard. It really lays out the concept of making hard decisions, even to the point of letting people die. But it’s also basic – it has nothing on Solium Infernum or Armageddon Empires, two card-based computer strategy games that have drawn praise for their complexity and richness of detail. Here you have card graphics (literally) drawn from iStockphoto, and despite the avalanche of information provided, the failure to offer a clear context for it makes such info difficult to act on. Red Redemption initially did a version of this game as a piece of edutainment for the BBC website, and only after winning an award did they decide to make it a full-on game. But with five scenarios, limited cards, and insufficient options to achieve your goal, I wonder if this title might not have best stayed in the edutainment category. Because once it goes up to full price, based on what I can see, it’s not gonna be worth it.

For £9.99 you get the beta, the full game when it comes out, a “special” deck of cards for pre-orders, and a bunch of crap that doesn’t really interest anyone like videos on how actual climate change science was used to make this game as real as possible.

If this game is as real as possible, what it’s told me is that we’re doomed. Because if handsome, charming, roguish Steerpike can’t solve the oil crisis, who can?

Pre-order Fate of the World at http://www.fateoftheworld.net/index.html

4 Responses to First Impressions: Fate of the World