Life sometimes has a way of biting us in the ass!

Brilliance has it rewards, but if brilliance is far ahead of technology, or if you have secondary objectives, that bite can really hurt.   While there are circumstances where being bit in the ass can be pleasureable, it can also create a slow burn that never quite goes away, eating at your psyche as well as your pocket book.  If we have learned nothing over the past decades, it should be that it is better to be right than it is to be first. 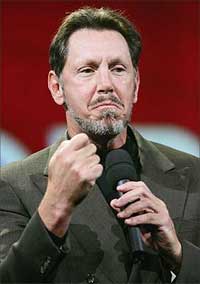 Take Larry Ellison, gazillionaire head of Oracle, the well known database company.  In 1995 he had the world shaking idea to build and sell something he called “The Network Computer.”  These were to be low cost boxes with tiny operating systems and read-only memory.  His notion was to allow access to apps via the internet using (at the time) dialup modems and a browser.  The machine was to carry no software of its own, and programs would run as applets written in Java and downloaded on an as needed basis.  In simple terms, the Network Computer was to be a stripped-down version of a PC, which would enable users to gain access to the Internet with low costs. Users would not be required to have bulky, large applications (or suites) of software on their computers. Instead, the vast majority of the applications were to reside on the server (host) computer, and be retrieved as needed, via Java (or similar) software.  The initial idea was that software would be “rented” on an as-needed basis. The cost of software rental would fluctuate with market demand, but would remain relatively inexpensive in comparison to client-resident software packages.  It was, for its time, one hot idea; so hot, in fact that besides Oracle, Sun, IBM and Netscape jumped on board as proponents.

Bet you could guess what major company was completely opposed to the idea, opposed to it because they had just introduced Windows 95.  Trouble was Ellison introduced the idea as much to damage Microsoft  as to encourage a new and innovative technology.  Oh, he definitely saw millions of these things being sold, but also definitely loved the idea of hitting Microsoft in their software underbelly.  Unfortunately, Microsoft’s head start, as well as their almost immediate defensive strategy threw a gigantic wrench into Ellison’s plan.  Naturally, for many reasons, the idea failed.  It failed because the world wasn’t ready for it; it failed from lack of attention from Ellison himself, and a failure to look beyond the computer to the infrastructure necessary to make it a success.  And after spending 175 million dollars the plug was pulled on the idea in 1999.

The amazing thing about the experience is what it teaches us about failure.  Clearly failure is not a bad thing, what is a bad thing is trying to succeed with objectives that are not completely pure.  Sometimes we just are ready for a new idea, and sometimes we are not.  History is littered with brilliant innovations that failed…either because the world wasn’t ready, because the technology wasn’t ready, or because the plug was pulled too soon due to a lack of roadwork or available technology.  Want examples?  That’s easy:

So, in fact, Ellison’s genius in dreaming up the Network Computer is legend.  His entire idea revolved around building a small box with minimum power that would not need software to run.  Trouble is, he was more interested in affecting Microsoft’s software sales than in sticking with the idea to the bitter end; but then, who can blame him?  A 175 million dollars buys a lot of cotton candy.  Of course, today, his idea is not only  REAL, it is with all of us in the form of Netbooks, Google Docs and the like.   We call it Cloud Computing, a term we are all familiar with due to the innovations it has brought us, including the ability to stream programs from their source.  While the Network Computer didn’t work as promised, was way too early for its time and cost too much, it was a brilliant idea that has come to fruition.  Ellison’s basic dilemma was, to put it simply, that his idea hit the market before the infrastructure was there to support it.  Java was simply not powerful enough to do the job of running lightweight Web applications.  And so, installed software is still with us, but is losing its strength and its luster.  The lesson for all of us is that infrastructure is crucial to innovation, without it, any new idea is guaranteed to fail.

So what does it all tell us?  I don’t know what it tells you, but it tells me that we need to welcome failure.  Hug it, squeeze it, love it up, learn from it and grow thereby.  But I can tell you one thing, building a car factory when there are no roads to drive them on is not a formula for success; and building a rocket when a fuel doesn’t exist that will lift the mass is not going to lead to a bunch of new millionaires.  Fundamentally though, Ellison achieved his most important objective, although it took a dozen years after he pulled the plug to do it.  The idea did, and is, damaging Microsoft.  They thrive when people like you and I buy and load their software.  Don’t know if you have looked lately, but Microsoft’s Vista bombed and the sales of Windows 7 are certainly not burning up the tarmac.  Some believe that were it not for agreements with computer manufacturers who load Windows 7 on their product, the company profits would severely deteriorate.  My goodness, what a bite in the ass!  It certainly doesn’t take much to change the world, does it?  Just brilliance, money, innovation, and infrastructure.