“.muunitnoc emit-ecaps eht retla nac ,oot ,uoY* Kirk and Picard did it. Doc Brown did it. So did Doug and Tony from the TV show, Time Tunnel. You know you’ve always wanted to do it; but, beware the Butterfly Effect because as we well know, things will go awry.”

Konami’s new DS game, Time Hollow, follows the “alter the past to save the future” theme. The night before Ethan Kairos’ 17th birthday, his father tells him that he has something important to tell him on his birthday. That night, he has a nightmare in which his parents vanish through a pulsating blue hole. When he wakes up the following day, he realizes that things have somehow changed and he’s been living with his uncle since his parents disappeared 12 years earlier. Was the life with his parents all just a dream? 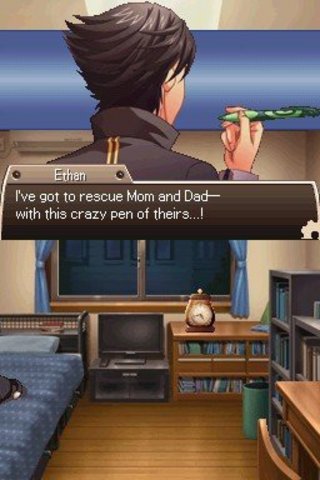 Is there ink in this thing?

While Ethan is trying to come to grips with this change in fortune, Sox, the family cat appears with a pen – the Hollow Pen – and a note tucked into his collar. The note not only directs him to a specific spot, but it also mentions a particular point in time associated with that location. With the Hollow Pen in hand, Ethan embarks on a quest – which has a Groundhog Day– like quality – to reclaim his past. Along the way, Ethan will discover he isn’t the only one possessing this special pen; and Sox is an unlikely ally.

Gameplay is the DS equivalent of point and click – tap an area on the screen with the stylus – if Ethan can interact with it, the player will receive an appropriate icon; the pointy finger if you’re checking out objects or the ever popular ellipsis in a talk bubble that indicates Ethan can chat up an NPC. You can also move the touch screen ever so slightly to the right or the left by either touch/drag or using left/right on the +Control Pad. You’ll definitely want to shift the screen when looking for objects or people as sometimes things are hidden off to the side.

Similar to the Phoenix Wright series, you can save the game at any time simply by tapping the “System Menu” button located in the lower left of the touch screen. When you’re ready to play again, you can load from the one save slot or elect to re-start from the chapter’s beginning.

Where should I go next?

As Ethan wanders the map, conversations with friends or found objects will trigger flashbacks – essentially false memories – that Ethan must somehow correct. The Hollow Pen exists solely to fix these false memories. By using the pen to open a time portal – digging – Ethan can alter the past to repair the present; however, Ethan will discover that restoring one flashback can have a disastrous domino effect which adversely affects several other memories. It’s essentially a time-out-of-phase edition of Pokemon – “gotta fix ‘em all” – which is made all the more difficult with another Hollow Pen added to the mix.

The Hollow Pen has a finite power supply so you can’t simply open up holes willy-nilly. Each time you “dig” diminishes the pen’s power, so you’ll want to be sure you’ve chosen the right spot before opening a portal. Full power is restored to the pen at the beginning of each of the six chapters (in addition to a prologue and epilogue) or you can locate Sox lurking in various map locations and he’ll toss a glowing, green power ball your way that will increase the pen’s energy by one unit. (How does one teach a cat to do that? All my cat does is sit in my lap and absorb body heat.)

Time Hollow’s story is linear, yet convoluted (is that even possible?); the prologue leads you around by the nose, but since it functions as a tutorial of the game’s controls, I can forgive it. The rest of the game isn’t as restrictive – you can wander freely to the various locations around town – however, if Ethan isn’t required to be there at that particular moment, he’ll state that he doesn’t need to be there and you’ll get kicked back to the town map.

Graphics are clear, crisp anime and manga-inspired. When Ethan talks with the other characters, both of their portraits are displayed on the top screen; depending on the emotion the portrait will alter to show that sentiment. This feature goes a long way towards getting the player to sympathize with Ethan’s dilemma. I came to care about the characters in such a way, that I found myself crying aloud when fixing a single flashback snowballed out of control and altered several other lives.

Originally, after spending only an hour with the game, I “sagely” stated that the music was probably pretty good… well, I need to revise that statement: while the opening and ending song is quite catchy and the incidental music is good and appropriate to what’s happening on-screen, most of it’s on a short, repetitious loop and can be rather annoying when trying to figure out where to go next. Ambient sounds are limited to footsteps or doors opening/closing as characters enter and leave the area. Time Hollow sports quite a few cut-scenes which are very well voiced. Be aware that Time Hollow is very text heavy. If you’re more action-oriented there’s a good chance you won’t like this game.

What have we here? Garbage?

Let’s discuss the puzzles, shall we? Puzzles are a mixture of conversation- and inventory-based and pretty straight-forward. The only time I got stuck was because I ran into the time-honored tradition of the pixel hunt which halted my forward momentum. I still don’t know exactly where one particular inventory object is actually located as I found it purely by accident while trying to shift the screen to the left. Another instance was simply forgetting that I could shift the screen and what I was looking for was mashed up against the edge of the screen. There are no timed elements, mazes or sliders. You’ll not collect a massive amount of objects and won’t use some of the stuff that you do find. The game is specific about what it will and will not let you use; but, at least it doesn’t make you hunt up a small knife for cutting rope when you’ve got a perfectly good screwdriver in your bag o’ tricks.

Like Trace Memory (aka Another Code), if you play through the game a second time, you’ll discover a few Easter eggs and the ability to do some different things. There’s also a way to get to a “good” ending via a shortened play-through. Oddly enough, I managed to see the same ending twice. (One of the rare time I was actually paying attention.)

At the end of the day, I really enjoyed my time with Ethan and his friends. Even though Time Hollow is more interactive novel than your average run-of-the-mill adventure game, that’s not a bad thing as the story and characters are very engaging. Besides, there was a cat helping put things right. How is that not fun?

*You, too, can alter the space-time continuum.

One Response to Time Hollow