Psychic Aquatic World Cup news now, as Paul the Oracle Octopus is up to his old tricks again with some predictions for tomorrow’s World Cup grudge match between England and Germany in South Africa.

Paul, who happens to be something of a celebrity in his German homeland, isn’t prepared to join most television pundits in sitting on the fence. Paul likes to call things as he sees them – from the future – and the result of this view into the world of tomorrow is a win to the Germans. Paul didn’t grace us with a score prediction, which wouldn’t have been a problem for something with 8 limbs, but few Germans are likely to care at this point.

The octopus, who resides at Oberhausen Sea Life Aquarium (read – Secret Portal Into the Depths of Space and Time Itself), is reported to have made the prediction after climbing into a box – containing a hapless mussel –  emblazoned with the German black, red and gold; ignoring the mussel trapped in the box of St. George. A spokesman from the aquarium remarked that the result was “Phenomenal”, and that Paul “swam straight over to the German glass, climbed in and even put a lid on top once he was sitting inside.” An emphatic win could be on the cards.

This sophisticated method of predicting football scores has wielded some interesting results in the past. During Euro 2008, a competition in which Germany reached the final, only to be beaten by Spain, Paul was on the money with 4 results out of 6. This year however, Paul has called German wins over Australia and Ghana, with a Serbian win over the Germans all correctly, giving him a 100% record for this years tournament.

Frankly, I’m not even going to watch the game in light of this. Why bother? Instead of standing in a sweaty bar being covered in second hand lager as England bow out of another major tournament at the hands of “the old enemy”, I’ll be at my local Aquarium with a roll of lottery tickets. 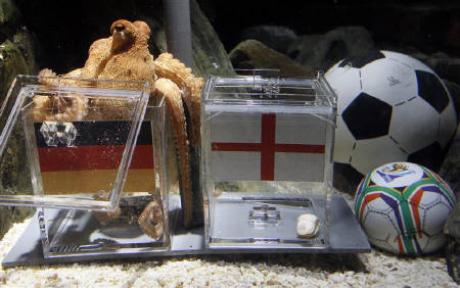