…a delightful, charming, fantastic tale with some clever puzzles and a well-realized fantasy world.

I’ll be the first to admit that I didn’t have many expectations for Daedalic Entertainment’s The Night of the Rabbit.  It’s been a while since I’ve engaged in point-and-click adventure gaming, and when I do, these days, it tends to be oldies that I missed: Broken Sword or Gabriel Knight, maybe, or on the newer end, Syberia.  Daedalic, which is absolutely prolific with these things, was a company I’d heard of but not really experienced, besides a short flirtation with the delightfully dark Edna and Harvey: Harvey’s New Eyes, which despite its inventively accident-prone cast didn’t much hold my interest.

But it’s clear from the get-go that The Night of the Rabbit is something wholly different.  I’m told it has somewhat more in common with The Whispered World, another Daedalic title, than the other games for which they are best known, Edna and Harvey and Deponia.  I can’t speak to that myself. 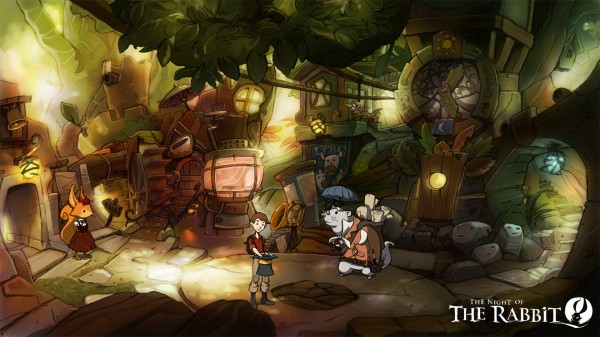 Jerry’s hat is useful for carrying things, stuff, and junk.

All this rambling is, I suppose, my way of working up to writing a very tricky review.  The trickiest reviews are the positive ones, you see.  It’s easy to tear a game down, if it’s bad; games can be bad in a lot of different ways.  Games that are good need to be held up somehow, pointed at, applauded, and sometimes, in fairness, nitpicked to oblivion, just so it seems like the reviewer isn’t too biased.  A lot of games fall into this frustrating-to-review nether realm of being Quite Good, If You Ask Me, But Nothing You Haven’t Seen Before.  What is there to say?

On a Day in Summer Vacation…

The Night of the Rabbit is the story of twelve-year-old Jeremiah Hazelnut, who goes by Jerry and wants to be a magician.  On the penultimate day of summer vacation, Jerry receives a strange, probably magical letter.  Such letters are usually reserved for neglected, cupboard-under-the-stairs dwellers, but Jerry gets one despite having his own bedroom and coming from a loving family.  The letter instructs him in some inadvisable pyrotechnics in the nearby forest, a spell that conjures an anthropomorphic albino rabbit in a very fine coat: the Marquis de Hoto.  He informs Jerry that he has come to whisk Jerry away to learn the ways of real magicians, Treewalkers, who can travel to different worlds using special portal trees.  With the assurance that he’ll be home in time for dinner, Jerry agrees to go with this giant talking rabbit in a very fine coat and learn to be a magician.

Jerry’s education in Treewalkery takes him to the town of Mousewood in a world not unlike his own, populated by talking animals of all sorts.  (Magic helpfully shrinks Jerry to mouse size for the time being.)  Mousewood calls to mind any number of mice-have-civilization stories and is populated by charming and quirky characters with myriad problems for Jerry to eventually solve with inventory puzzles.  The characters are given a good amount of personality through both the writing and the voice acting, and if a few get a little wordy at times they at least remain entertaining.  Mousewood is where Jerry spends most of the game, and the utility of the number of locations that get extensively used in The Night of the Rabbit makes the game feel homey rather than small. 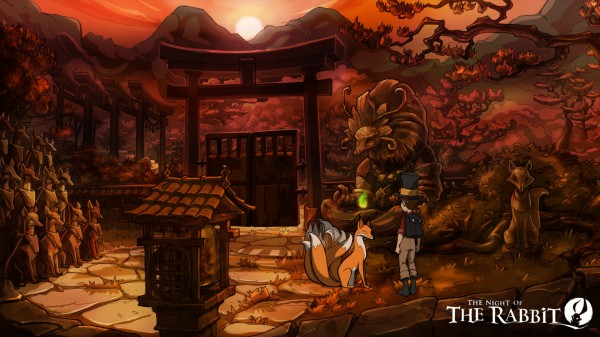 Jerry does travel to some exotic locales.

The mechanics are very like you’ve seen before, a few simple clicks and an inventory to comb through.  It’s all very fluid and easy, and just in case you’re very dense the game includes a brief tutorial.  Aside from the usual gamut of inventory puzzles to solve, there are several sets of secret items to find, if you like, and a card game to play, and even audio stories set in Mousewood to collect.  It’s a full package.

And oh!  The visuals.  The Night of the Rabbit is a very attractive game, storybookish and alive.  That storybook aesthetic suffuses every inch of this game, even as Jerry travels to still other worlds and encounters ever-darker challenges.  This is a storybook about growing up, in part, but also about dreams, and hopes, and identity.  I think this is a game I would have devoured in my younger days, perhaps wedged between LucasArts adventures, and for that matter the game is pretty suitable for all ages, save perhaps for one late puzzle involving public drunkenness on the part of a villain.

And Now I Name Drop a Little More

I think it’s a rule of game reviewing that any point-and-click adventure review has to mention at least one LucasArts title by name.  The problem is, The Night of the Rabbit doesn’t really bear comparing to the games of LucasArts’s heyday because it is simply quite different in tenor.  It is funny, but not wacky.  Serious, but not deadly so.  It has dark moments, but it isn’t dark.  It’s not the successor to Monkey Island or Grim Fandango or Full Throttle because it’s not at all like those things, despite using the same fundamental mechanics.  It is pleasingly different from most of the other point-and-clicks I’ve played.  I don’t know if that’s because I’ve missed them or because they aren’t out there.  Is it just me?

I realized earlier that what this game initially reminds me of is The Girl Who Circumnavigated Fairyland in a Ship of Her Own Making by Catherynne M. Valente, not because the plot is all that similar but because both embrace the “say yes” mentality of portal fantasy.  There’s arguably a lack of tension early on because the story is driven simply by Jerry agreeing to go along with the Marquis de Hoto, though this problem is resolved with the appearance of a real threat before too long.  A lot of this game is about saying yes, answering the Call, and about doing so in the face of adversity.

The Night of the Rabbit is a more than worthy diversion, even if it probably won’t blow your mind.  Then again, on a day in summer vacation, anything is possible.

8 Responses to The Night of the Rabbit