Hi, Tappers! Guess where I am! Wait, did the headline give it away? Or maybe the blurry photo of people’s heads as they rush through a crowded convention hall?

That’s right; I am at PAX East, and oh my god you guys they’re making a new remastered DuckTales game.

Below the jump: a Day One grab bag of a few indie games that caught my eye, the not-indie and sadly hands-off preview I saw of Saints Row IV, and did you know they’re making a new DuckTales? no seriously

Indie game developers have the biggest hustle, and sent me the vast majority of the press releases I received prior to the event. While it would be pretty hard to see everything that’s there, I spent a little hands-on time with Organ Trail, Delver’s Drop, Drunken Robot Pornography, and Transistor. 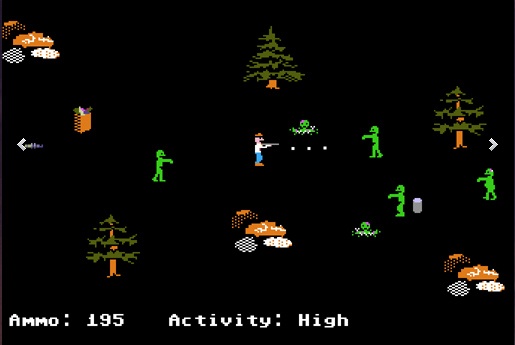 Organ Trail is a game that’s out on Steam right now, done by the Men Who Wear Many Hats. The premise is pretty straightforward: it’s basically the edutainment game The Oregon Trail, but instead of a trip in the frontier era in an ox-drawn cart, it’s a modern-day trip in a station wagon across a country ravaged by zombies. This is going to sound obvious, but if you like zombie jokes and you have fond memories of The Oregon Trail, you’ll probably like this! Continuing with their theme of genre fusion, the development team is also teasing a new project, Wizards and Warp Drives, which promises outer space combat with D&D-style fantasy adventurers. 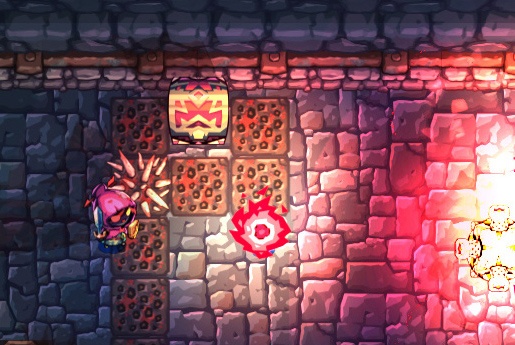 Delver’s Drop is an action-RPG that was recently successfully Kickstarted. I was drawn in by the colorful graphics, but stayed for the random/procedural level generation. I’m a fan of roguelike games and action-RPGs both, so this is right up my alley. The game is still in early alpha and has some quirks to work out (I had a hard time telling good pits that would lead to the next level from bad pits of instant doom). But it’s really slick and colorful, and it’s always nice to see Kickstarters working out into full game releases. 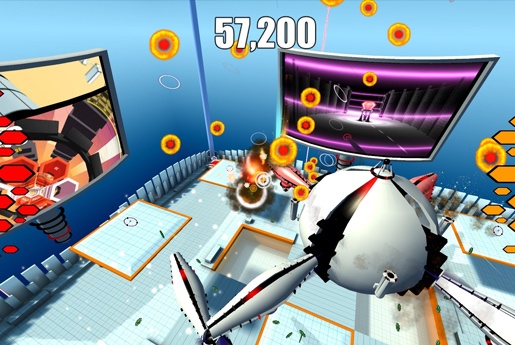 I was so glad, when I Googled Drunken Robot Pornography, that I got screenshots, and not actual drunken robot pornography. (Well, maybe glad in a disappointed sort of way; I mean, robot pornography…) This game is by those cards at Dejobaan who are always coming up with the most interesting eye-catching game names. The game attached to that name is pretty fun: a bullet hell shooter, but in the first person. Shoot down robot titans while trying to avoid scary lasers and bullets with a high-powered jet pack. It takes place in Boston, because, well, that’s where we are! This game is in alpha, but it can be played right now if you check out Steam’s new Early Access program (which is news in and of itself, but, I digress!). 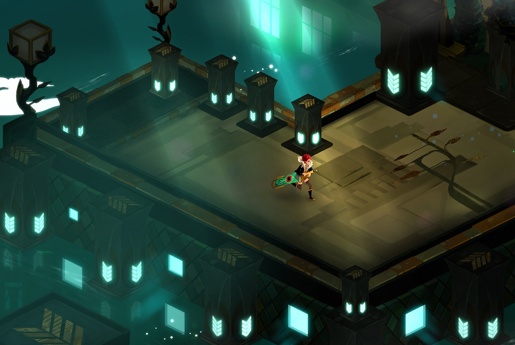 Transistor is a title that got a lot of media interest just prior to the convention. It’s made by Supergiant Games, the indie team that also created action-RPG Bastion. And… it looks a lot like Bastion! It’s got a similar isometric perspective. It also has the same gimmick of an everpresent narrator that discusses the player-character’s actions in real time. This time, however, the character is a woman (named Red) and the narrator is the voice of the sword she’s carrying. There’s also a slightly different combat flow… the oversized sword swings very slowly, so actions are executed via a somewhat turn-based approach of queuing up actions during a frozen-time period, then watching them play out. This is followed by running around dodging, waiting for a turn to queue actions up again. I’m not sure if I got the hang of it or not during the brief demo, which contains basically everything visible in the game’s first trailer. But the game looks very lush and shows a lot of promise. I enjoyed Bastion a lot and Transistor feels a bit like a spiritual sequel that will invite inevitable comparison. 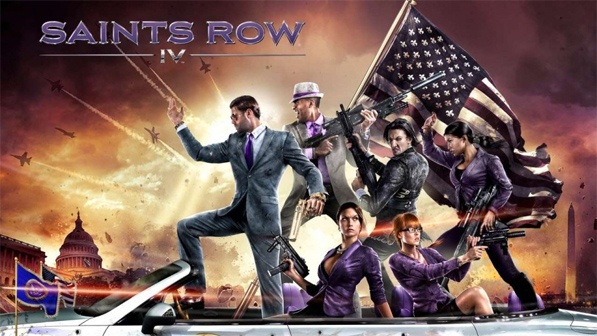 I didn’t look at too much AAA today, but I couldn’t resist an invitation to get a closer look at Saints Row IV. I was surprised by just how much I loved Saints Row the Third when I tried it out last year. And… was that really only last year? Well, yes, apparently, but the developers at Volition were willing to field skeptical questions about how soon this project has been announced.

The result of this is a super-powered take on Saints Row. In a possibly Matrix-inspired twist, aliens called the Zin have trapped the Boss of the Saints in a virtual recreation of the city of Steelport. Of course, because it’s virtual reality and the Boss is clearly also The One, the Boss now has amazing powers. The demo showed off super-speed, super-leaping, telekinesis, and the ability to shoot ice blasts that freeze enemies and pedestrians alike.

Did I forget to mention that the Boss is now President of the United States? Of course she is. Why else would aliens kidnap her? (Or him. Demo-Boss is Default-Boss and therefore male, but my Boss is a woman, so there.)

The demo also showcased some cool new weapons, like a gun that fires concentrated waves of dubstep. Existing weapons in the game can now be customized with skins, so that RPG launcher the Boss uses now looks a lot like the SuperScope 6. Ah, nostalgia.

Saints Row the Third was wacky. Saints Row IV will probably be at least on-par wacky, though with the additional sci-fi elements my bet is on “wackier.” The series is leaving its street-crime-influenced roots a bit, so there’s a narrative and thematic departure in this title that might not be for everyone. I’m a little on the fence about whether superpowers is a natural evolution of the previous title (which did include both zombies and Martians) or a shark-jump. But since I enjoy open-world super hero games, and I really enjoyed the last Saints Row, I’m sure I’ll snag this and and do a full review when it’s released! 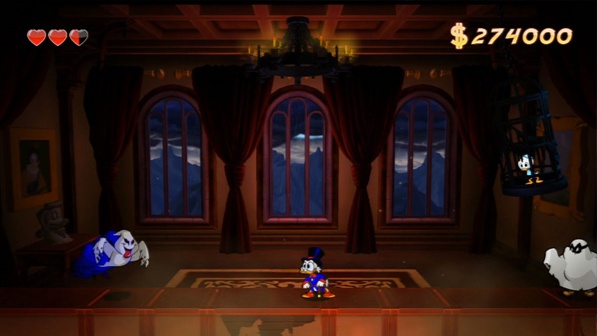 I was, completely coincidentally, wearing my DuckTales T-shirt today when they announced this, so the nice people had no choice but to answer all my enthusiastic questions. DuckTales Remastered is being developed by WayForward in collaboration with Disney and Capcom. It’s a downloadable title that will revisit the classic DuckTales game with all new graphics and remastered music. Some new levels will be included too to extend the game and create some new surprises for fans. The games is hand-animated, and will also be fully voice acted (with some of the original cast from the TV show too).

It’s weird to think that DuckTales would be, like, the announcement today, but there was a lot of buzz and a pretty long line to check this out. I guess people just have a real fondness for Scrooge and his crazy pogo cane skills. No lie: DuckTales, not any Mario or any other game, was actually the first Nintendo game I played to completion (and, I think, the first game I ever “beat” period!).  And stop me if you’ve heard this one…

Capcom also has the really interesting-looking Remember Me on display, and I hope to check that one out tomorrow. I also have a chat lined up with the developers of the Cognition series. So I hope you’ll stick with me as I talk about… whatever looks cool to me at the show!