I wrote a lot of words about Halo 4 that might have amounted to a proper review. But, while I liked Halo 4, I didn’t really like all the words I ended up writing about Halo 4. I feel as if in my overview I didn’t say anything that hadn’t already been said about the game by the rest of the internet.

To sum up briefly: great action, beautiful artwork, slightly flawed level design. There is a review on Clever Musings l ended up mostly agreeing with, so check that out for a good rundown. I played Halo 4’s campaign for the action, the “shooty bits,” and in that sense it was a marvelous good time. It did suffer a little from weird spikes in difficulty on certain segments, and there was never as much ammo as I might have liked.

But in spite of it being a strongly action-focused game, I find that what I really want to discuss about Halo 4 is the game’s story and themes. Mostly, I want to talk about Cortana. From here on, I must spoil all of the single-player campaign, right up until the end. I realize that means I may lose some readers here. Catch you next time, then.

Feminist issues in games always interest me. When people are discussing them, I gravitate toward those articles. When Halo 4 first came out, there was a bit of discussion about it having a very strict anti-sexism policy in multi-player. One comment that kept turning up response was that this seemed a little unfair, in light of how sexy the sidekick character, Cortana, is in the game.

This jumped out as strange to me. Typically, when men are dogpiling on a comments thread like that, they aren’t making a point to complain about female sexualization. But some men (and it was almost all men) seemed really upset about Cortana’s new upgraded look. Because she is too sexy, they say, and that sexuality somehow undermines any other feminist messages that might be in Halo. Yesterday I also read this feminist critique of the game making the same argument.

I honestly don’t think that Halo 4’s take on Cortana is over-sexualized. She is nude. There is a difference.

The creators here had every excuse to make Cortana look like a hypersexed blowup doll, since, like every video game woman, but, also thematically, she’s a virtual reality woman created in a computer. Instead, Halo 4 took the bold choice of making Cortana look like an actual naked woman, in blue body paint. There’s no crazy Dead or Alive water-orbs on display here. She has an idealized shape, sure, but by video game standards a fairly realistic body shape. She doesn’t have any genitalia on display, but she has individual toes. This depiction seems to be freaking some people out. I think it’s actually really cool and amazing. Cortana’s not feeling herself up and cooing, doing bend-over poses, or climbing stripper poles. She’s doing her job. Naked.

Now as far as what her job is, she is of course Master Chief’s computer AI helper. In that sense, she’s not always fun to be around. She’s slowly breaking, throughout the course of the game. She’s assisting me in telling me where to go and what to do, in spite of that. Always urgently, too. “Chief, you need to be there YESTERDAY,” she is shouting at me, flashing her waypoints aggressively, while I’m quite busy already being shot at by everything on the map. When it’s her turn, of course, to open a locked door or hack a computer that will open a portal, she seems to take her sweet time. I have certainly sworn a little under my breath at Cortana. 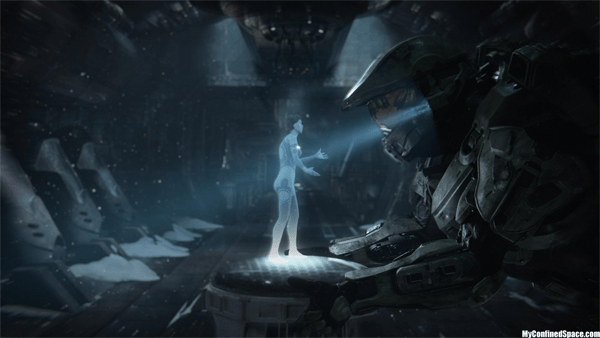 Still, I’m really invested – big, sappy girl that I am – in the relationship between John and his AI assistant. They are so cute. At the end of Halo 3, I teared up a little bit, because he was going to sleep and all she could do was watch, and it just seemed like a soft-spoken but classical tragedy. Halo 4 hits these notes again. It’s telling a love story. My major disappointment is that those two crazy kids don’t… just kiss already. They can’t, of course, because Chief can’t take his helmet off. He can’t really be a character at that moment, because he has to be everybody and if we actually had a face to put with the iconic armored look that would ruin the appeal in some way.

However… he does take his helmet off. In fact, Chief’s helmet coming off of his head is the final shot of the game. It’s what Halo 4 goes out on. If beaten on Legendary (I did not do this, so I must thank YouTube for the clip), the player can see a little more – hollowed-out eye sockets, something haunted and not entirely human – before the game’s final fade to black.

This is the only glimpse we have of Chief’s real vulnerability. Cortana is vulnerable more often, because game writers have accepted that, yes, it’s okay for women at least to be vulnerable. Sometimes she is a damsel in distress. She is mentally deteriorating, and she is afraid. In that sense, she is really a more interesting character than the Chief. Interesting characters have some kind of weakness.

In those rare times in the story when the Chief is allowed to be vulnerable – which is rare, and never vocalized with much more than a grunt – it is Cortana who saves him. I like that.

The overall plot arc of Halo 4 isn’t very satisfying if examined on its own. It’s basically a circular loop. Chief comes out of cryosleep and crashes on a planet. He is trying to send out a distress signal, but in the process he is tricked into letting out the Big Bad, called the Didact, from an egg-like prison. The rest of the game is then about how Chief defeats the Didact. He is essentially solving a problem that he, himself, caused.

What’s more interesting is how this (pretty simple, basic) plot interacts with what I think to be the emotional core and themes of the game. The Didact, and another character called the Librarian, both talk to Chief about how he had to give up his essential humanity to become the hero that he is. In the background noise, human soldiers and scientists are discussing this as well. Meanwhile, at Chief’s side is Cortana. She is a character that is distinctly not human, but she mostly looks human, and she is allowed to display that human-like vulnerability. 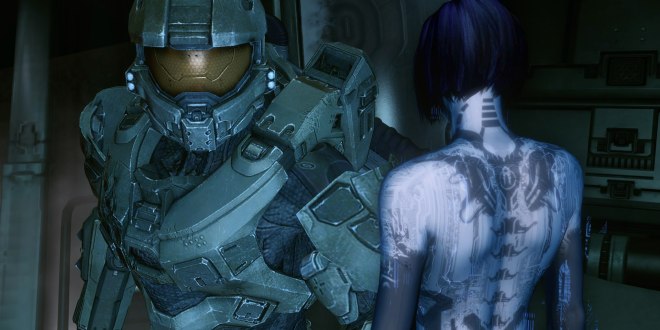 Cortana perishes in her efforts to save the Chief, but I don’t actually think we’ve seen the last of her. In her final scene, she appears at a human size. She is smaller than the Chief still, but closer to his scale for the first time. During this conversation, she only refers to the Chief as John. She considers him a friend and an emotional companion, if not precisely a lover. Returning again to Matt Barton’s analysis, I agree when he says this is a “chivalrous” and classically chaste relationship. I agree about what John’s armor is supposed to symbolize in this relationship. But I disagree that the game is supporting his armor, his lack of humanity or emotion. Rather, I think Halo 4 is condemning it.

“Records show Spartans routinely exhibited mildly sociopathic tendencies, difficulty with socialisation…” says the game right at the start… and this is obviously framed as bad. Take it on its face. In the penultimate conversation scene, Chief is talking to an unarmored officer, Lasky, on deck. He tries to remind Master Chief, John, that he is human. The soldiers he fights with are also human. John says that Cortana had said that as well. That’s certainly all there. But there is no evidence to me to suggest that the game is trying to say Cortana is wrong. The game empathizes with Cortana; it empathizes with Lasky. It seems to be inviting the player to do the same.

I grant that this is a very tricky message to try to get across in the medium of a video game. Maybe eight previous hours of being a stoic badass can’t really be undone by an ending cut-scene that questions the necessity. But when combined with the fact that the entire arc of the story was caused by a mistake – Chief’s mistake – it’s easier to see it.

Of course it’s controversial that Chief’s helmet is removed in some endings. That’s the whole point of the story, though. That’s where the story must, inevitably, go. The overall message is unfortunately muddled because of the underlying action that supports it. Shooting is fun and wearing armor is fun. All the power fantasies are still present.

But when some people are uncomfortable about the themes in this game and its ending, that’s actually showing that it did come across a little whether the audience was actively paying attention or not. Does Cortana’s nudity make some fans uncomfortable? Good, it’s supposed to. Players are supposed to empathize and feel with her, and worry about her vulnerability. Seeing someone as a person and friend rather than just a sexual object, but also seeing her naked, is designed to be troubling and a mixed message. Does Master Chief taking off his helmet make some fans uncomfortable? Good, it’s also supposed to. It is the act of the Halo series itself trying to show that armor will not always be the answer.

Being new to the Halo property, 343 Industries had some big shoes to fill. It took some guts to, on top of that, decide they were interested in exploring the themes of the vulnerability of the hero, and, in fact, whether he is ultimately necessary. I hope that 343 has the courage to follow through with the story that they are beginning to tell. If they do, Halo has an interesting future ahead.

14 Responses to The Naked Vulnerability of Halo 4