Attending a large college is somewhat of an interesting experience; students who lived at home are both relieved at the freedom they now experience and yet stranded from everything familiar to them. Fortunately for students, most universities seem to develop groups of every imaginable category (and if it doesn’t exist, chances are that someone out there would be willing to join). While many are shy about making new friends, these groups seem to be the perfect introduction to new social horizons no matter how “niche” the group may be.

The setting: Michigan State University, September of 2007; while students around me moved in with furniture, clothing and other accessories in giant laundry bins, I peered intently at a poster for a group called “SpartyLANParty.” They seemed to be advertising some sort of “LAN party” in which gamers brought their own computer to play games with one another. It sounded like just the kind of community I could associate with and so I promptly signed up on the forums. Thirty minutes later, someone approached me, identified himself as “XtremeBlazer,” heartily welcomed me to the group and cheerily wished me a good day.

Little did I know how much SpartyLANParty (or “SLP”) would become a part of my community and identity.

LAN parties don’t just exist at universities; however, universities make good targets for groups of like-minded gamers. For starters, universities generally have rooms that can handle power and internet for dozens of users; they’re also more receptive to renting out spaces for LAN events to occur. That doesn’t necessarily mean that students are the only people who can attend either. Many of the university-hosted LANs allow not just students but also anyone old enough to attend and willing to bring the required stuff. As long as people are willing to bring their own computer, power cord and network cable, most LANs only additionally require a small fee to pay for expenses such as room cost, power use and meals.

My first LAN was an experience that I’ll never forget. For the first time, I was playing my favorite computer games alongside others in real life; I was sitting around and chatting with like-minded people while eating delicious pizza. I chugged energy drinks, formed teams with people sitting next to me and even won prizes at the end. 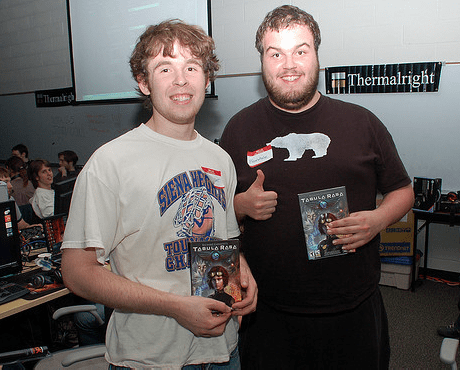 Ahh, the good old days… wearing “Hello, my name is” nametags, having hair and not knowing how bad Tabula Rasa was. (I’m the one on the right)

LANs seem to attract different people for different types of fun. There are those of us who come to play games but not to compete in tournaments. Some of us go to the event solely for tournaments. Some aren’t even gamers but are attending because a gamer friend has invited them. I prefer playing games just for fun and seeing if I can stay up for the entire LAN (which usually goes on for more than a day); others bring their pillows and sleeping bags to snooze under their desks.

Not everyone has the same game, but some people have an old game and find other people willing to play it for nostalgia’s sake. Some bring consoles anyway and the event staff scramble to set up some sort of TV configuration to allow those people their own fun. Some LANs host what’s called the “Game of the Hour;” it’s a sub-event where the event staff attempt to get as many people into the same game as possible for an hour before switching to a different game.

Staff personnel set up the event the day before with the help of volunteers who may or may not get a chance to set up early for their efforts; if the group is organized, this usually only takes a couple of hours. That’s the key to a good LAN event… if the group organizing the LAN has prepared for everything they need in advance, the event set-up and tear-down usually goes quite smoothly. This involves students who have taken a leadership role in the group along with volunteers who know when to show up to help.

Once the event gets going, things become pretty routine (but still fun). As players shout their victory or moan their defeat, occasional pizza deliveries get everyone scrambling to the line for more food. Gamers guzzle can after can of NOS, Monster or Red Bull while comparing how many they’ve already had; the SLP event actually has a “caffeine log” where people can log on and list how much caffeine they’ve had in a set time frame. 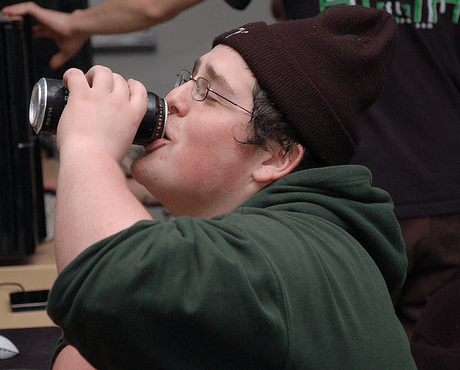 But the true power of a LAN event is that it allows people to come together to play, compete and talk about their favorite games. That community doesn’t disappear at the end of an event… it stays alive even after everyone has packed up and gone home. Gamers have new friends on Steam/Xfire/etc. to play games with; many use the forums and messageboards provided by the group to talk about other interesting events happening around them. Lasting friendships (and perhaps enmities) are formed from the simple act of random people sitting down in a room to play games with one another and eat pizza.

Much of “mainstream” society refers to gamers as “asocial” and “introverted.” Many of us are those things and more. Yet the idea of a person going to an event where that person may or may not know dozens of total strangers… that idea is realized in a LAN party.

I used to be a Staff member of SpartyLANParty at Michigan State. If you’re interested in attending their events, go to http://www.spartylanparty.com and register on the forum (the October 1st event has been sold out). Meanwhile, be entertained by this quotation from one of our members (describing me):

You’re a freshman at MSU and you’re walking to class. All of a sudden you get stopped by a large intimidating hairy man several years older than you who introduces himself as some sort of vicious forest creature/giant sea-mammal hybrid. He then asks you if you are interested in paying to play video games locked in a building in the middle of the night with a bunch of grown men. How would you react?

Send a message to the author of this post at bearwhale@taprepeatedly.com

8 Responses to Are You a Gamer? Plan for a LAN