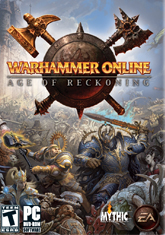 “Warhammer Online still has promise, but the licence is tragically underused. Mythic has tried to emulate World of Warcraft in so many ways they have lost their identity and reputation in the process. Despite innovation, Warhammer Online falls far short of what could have been something truly special.”

The MMO market is a fierce place at the moment, with no less than 6 fledgling MMOs showing at Gamescom and PAX, all vying for a slice of the pie.  And while Mythic over recent weeks have attempted to drum up enthusiasm for the future expansion packs they intend to release, particularly with the tease of Skaven as a partially playable race, it has simply fallen flat.

Mythic pride themselves on touting WAR as the Player vs. Player experience, and have subsequently shifted their entire focus onto the Realm vs. Realm combat, away from Player vs. Enemy encounters.  Sadly however, they are failing the fundamentals that make competitive gaming truly enjoyable.

The idea of Player vs. Player (PvP) combat within an MMO is not a new idea, and has been around since the early days of Ultima Online. Since the genre truly hit the mainstream, once again thanks to World of Warcraft (WoW), PvP has become a mandatory requirement for almost all MMOs currently in development.  Mythic have however fallen short of their own ambition, throwing away almost all they learned (and what was loved) from Dark Age of Camelot, and instead adopted a model so similar to WoW that they have only themselves and their publisher to blame.

Many of WAR’s issues still remain long after they were raised in the early stages of closed BETA.  While the game looks good, the engine powering WAR is simply not fit for purpose (or optimised and used correctly is probably the more likely reason).  Scenery clings to you like a needy child, while vaulting fences or rocks can result in instant death as you hover ominously or appear stuck on the smallest object. Animations are poorly completed, which while functional, lack the finesse so important to the polish and immersion of a game.  To see your character jitter erratically as you jump from a ledge or fire an arrow is guaranteed to remove any immersion you had, as you scramble to rectify your paralysed avatar.

It isn’t just the lack of polish which is a huge flaw, but the demand the game places on the user’s machine.  A game which revolves around hundreds of players bashing each other over the head should place stability and framerates at its core. Not here. Despite my initial report, my framerates are now so erratic at times it makes play uncomfortable, irrespective of amending video settings. Aion, for all its faults looks and runs incredible, yet WAR struggles with the basics at times, making RvR warfare at slick framerates an impossibility.   Excessive loading times, and being stuck on a loading screen is a particular pet hate of mine.

Despite these issues the RvR combat can be fun, but player items and healers (as with all current MMOs) are such a mandatory requirement that the gulf between those with and those without is enormous.  To be killed in two hits without ever having an opportunity to defend yourself is not particularly fun.  Instant death is all too common if you wade into any conflict without a healer strapped to you, significantly removing any possibility of true solo play.  Roaming in large packs in order to steamroll your opposition is really the only viable alternative if your Guild mates aren’t online, removing any prospect of skill being involved.

It’s not just the open RvR combat that falls flat as a result of an over reliance on dedicated healing classes and well geared comrades, but the fact that keep sieges are so sterile.  Siege equipment has pre-determined places where it can be built (in front of keep doors) and the defending players have nothing to do besides stand on the keep walls and fire the odd spell/arrow.  This creates a very predictable result as you (the defending party), watch the door eventually collapse.  Defence equipment is simply too poor, and attacking equipment too regimented.  Ladders, destructible walls and the ability to lay siege equipment anywhere would go a long way in actually creating a tactical approach to attacking and defending a keep.  The exchange of keeps is so swift and common because of these flaws that they aren’t an achievement, simply a regular forgettable event.

The linear character progression through Mastery Talents offers little customisation to your character.  Unlike World of Warcraft or Age of Conan, which give players the flexibility to truly craft their skill set, WAR only allows for a vertical progression of skills within one of three specialisation lines.  It’s incredibly simplistic and leaves every player not only having almost identical skills, but removes any feeling of independence.  There is no “Wow this build is great!”, more “My build is X, Y or Z”.  There is no in-between.

It’s not all bad however.  The game had and still has promise.  When grouped and fighting against other organised players the game can be brilliant, (framerates aside). The game world is also fantastic, but there remain too many glaring problems for WAR to ever regain a foothold in the MMO market.  During its inception, many were rightly thinking that great things were to be expected from an MMO developed by Mythic, combined with the Warhammer licence.  Sadly however, it is tragically underused and has tried to emulate WoW in so many ways it has lost any identity it could have had.  If Mythic had only stuck to some of the game mechanics which made Dark Age of Camelot the worthy king of RvR and PvP, it could have been truly great.

As the subscription numbers dwindled to several hundred thousand, it is evident that the rug has been pulled from beneath Mythic. They are now treading water, lacking the financial muscle and staff necessary to rectify the issues which plague it. The saddest part is that Mythic are innovators; the Tome of Knowledge having been copied entirely by Blizzard, and the Public Quest system and map indicators taken by ArenaNet for Guild Wars 2. Yet Mythic haven’t gone far enough or taken the risk they needed to, releasing the game 12 months too early.

The release of Guild Wars 2 may very well spell the end for Warhammer Online. Through anything other than blind loyalty, I see no reason for players to stay.