My first moments in F1-2010 were terrifying. Not the terror of being pursued by brainless zombies in the depths of the Agroprom, no, something much worse. The camera’s field of view swept over the group of assembled reporters with professional soft focus blur and a well dressed reporter stood to ask me a question. I was seated behind a microphone, and I was certain she was going to say, “Tell us about yourself, and why you think you can succeed in Formula-1?”

One person’s press introduction is another person’s job interview is another person’s nightmare. In actuality, the questions were about name, Country, and how you wish to be referred to by the recorded name system in the game, but for a moment I honestly felt like a nineteen year old hotshot in front of the world’s press not having been coached in media savvy responses from the age of five as a carting wizard.

Driving fans who are keen to know the answer to the make or break question:  “Simulation or arcade?” can go away with: “Arcade, with elements of simulation,  with an emphasis towards multiplayer fun.”

As far as the pure act of driving goes, I’m not sure any computer game can properly simulate an F1 car. You can simulate the  speed and sound of the car but the control and gut feeling necessary
to keep it on the road are impossible to achieve from a chair. Several games have Formula-1 mods, I’ve tried rFactor and found it very difficult. Without tactile feedback and a realistic three-d  presentation  of perspective there’s a lot of touchy-feely discovery of the corners and barricades. 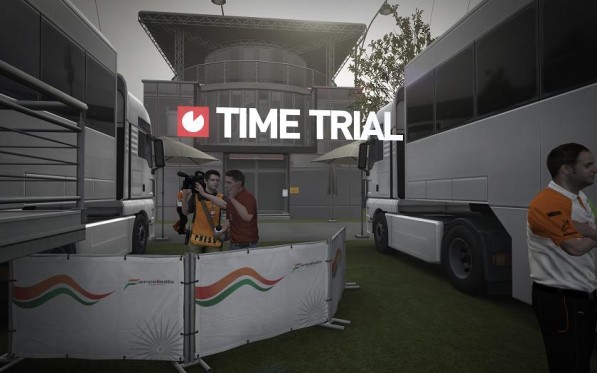 The paddock is where you'll hang out between events

Given that, I’m delighted at how approachable the driving is in F1 2010 and I think this is targeted at the right level of difficulty for some good multiplayer fun.  Despite hundreds of hours running laps in SimBin simulations, I can’t honestly say that I’ve managed to finish a multiplayer race of any length. Unless you were very lucky, the briefest loss of concentration in those games resulted in coming off the track with humiliation, dejection, and sadness as a result. So far I’ve managed to finish two 10% length races without so much as a serious accident at full difficulty and have had pole position against mid-level opponents without really exploring the limits and that’s pretty much the type of difficulty curve you want. Get some laps in, be gently allowed some fun without a lot of demands, and then adopt a more adventurous approach with experience. 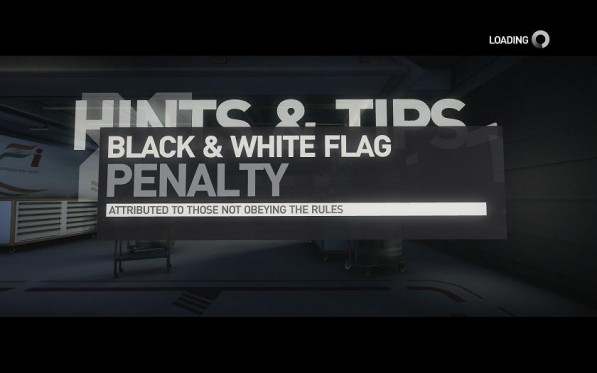 This is not, however, a true sim in the SimBin sense of the word. There is no support (currently) for telemetry, no access to any replay system outside the race session itself.   In F1 2010, I’ve so far spent most of my time in a quick setup window that lets you make the coarsest possible setup choices but they’ve been more than adequate so far. In GTR-Evolution the car was difficult to control so the garage was the first place people went to try to improve handling and this often became the trees that obscured the forest.  In F1 2010, the cars are much easier to handle, so no one is driven to monkey around with setups. At least not yet, anyway.

Graphically the game is pretty amazing and pretty well along where we’d hope to be, at least on the track. The shadows on the track at Lesmo #1 at Monza hinder finding the apex which is a nice change from GTR-Evolution where shadows were nowhere to be found. The off racing-line sheen during a practice session in the rain in Kuala Lumpur was also very well done.  The sound is a little wearing already as the engine revs repeat through the 2000 – 18,000 rev range 140,000 times per 10 lap race with all the engines apparently sounding exactly the same. I’m not certain of that and it wouldn’t be a surprise to me if I had picked a couple teams licensing the same engine from a single manufacturer but I do miss the unique whine of the M3’s amazing transmission and at least a little variety. A bit more problematic is lack of ability to control the audio levels of various sound source, such as squealing tires. The GTR series of games allow you to turn up the sound of squealing tires which gives you the ability to differentiate between sliding and breakaway braking but not here. I was locking up going into the corner at Monaco with only the faintest most distant tire protest and no tactile feedback whatsoever. 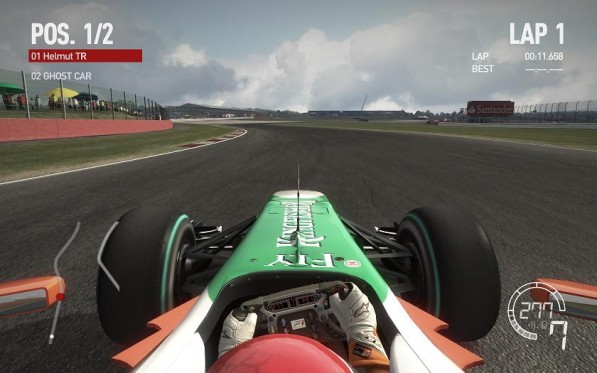 Ripping it up at Becketts

Attention to the career mode is apparent right from the start. Your very first interaction with anyone outside the initial press meeting is with your agent who has a contract for one of the lesser teams on the 2010 F1 grid. It remains to be seen how this will all play out, but there is a reputation system and if you achieve your goals for the races during the season your reputation goes up. My current team expects me to qualify 10th or higher and finish 8th or higher. The part of this that is a bit of an eye opener is how frequently you are reminded that you are in constant competition with your teammate. Often, it’s difficult with different cars to be compared with other drivers, but with identical equipment the only absolute yardstick is the other driver on your team. You can see their lap times during qualifying and practice, they are marked specially on the in game HUD while racing and your radio engineer will periodically broadcast where you opponent is relative to you. Gladly, in the first two races for my team this year, I’ve beaten the hide off the whelp, and I’m certain he’ll be longing for his old job back at Walmart selling Pocket Racers to kids under five before the end of the season. 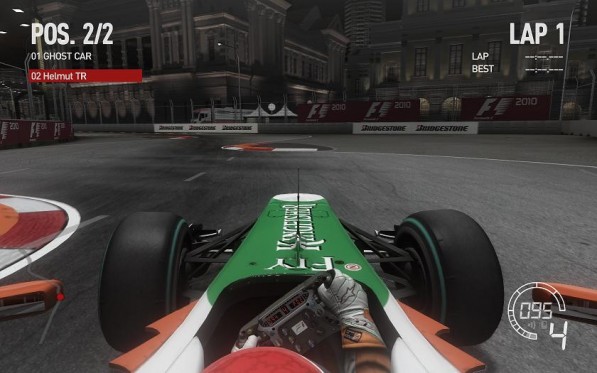 Singapore is one of the more convoluted tracks in the season

You can skip all that and just run single Grands Prix, or practice and time trials, or completely focus on multiplayer. I’m happy that there is support for LAN only games as these have worked nicely for me in the past with a private VPN LAN via Hamachi. I appreciate not having to  find a server that’s both empty and close (Internet wise) to both me and a friend just  to do a closed session without Internet griefers joining in.

There are some issues. I’ve had a handful of crashes to desktop, and there are some bugs reported on the forum where, in a longer race, you are asked to pit during a race to change tires (you must according to F1 rules) and every AI car pits on the same lap for the same reason and you get held until every other car has come and gone. I’d ask for a manual pit entry but the command is mapped to a button my G25 doesn’t support, and apparently it’s not re-mappable. Didn’t someone mention something about this recently? When it comes to in-game capabilities you’ll hear the terms: apparently, not so far, seems like, and maybe and frankly it’s just that difficult to figure out given that the publicly available manual is the merest homage to the real manual locked somewhere in Codemaster’s vault. 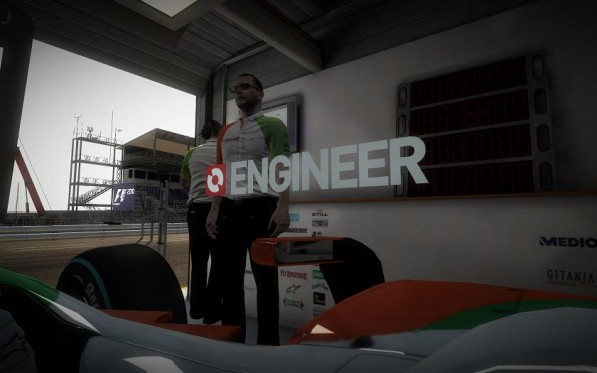 One of the stations you'll see in the garage

It certainly appears the time is right for an F-1 license with F1 2010 sales in the UK exceeding those of Halo and Dead Rising 2 combined. The forum  at Codemasters are tracking a few other issues getting some players all angsty so we’ll see how this release is managed.