“Sounds like something you need to check out,” wrote my friend Ben Hoyt of 47Games. “Would love to hear your thoughts.” He was speaking of this.

Ben’s a good guy; a far better writer, and a much crueler – though undoubtedly more genuine – critic than I. Being a game-maker himself, he’s very hard on them. I’ve never known anyone more adept at dissection of game experiences. Ben also knows I like the occasional oddity, so whenever he stumbles across one he tells me about it.

Thus did I buy Deadly Premonition…

…which sat unopened for months, buried under a growing pile of new releases. Intrigued though I was by a game that promised to be an even mix of Twin Peaks, Silent Hill, and Pathologic, I’d be lying if I said I wasn’t a little concerned over some of the more vitriolic vitriol that’s been spewed against the game. Survival horror in general has always had an issue with control structures, and Deadly Premonition – or, as it’s called in Japan, Red Seeds Profile, was apparently among the worst offenders. But the game has garnered an obsessive cult following, and having played for a good six hours I can see why.

As FBI agent Francis York Morgan (“call me York, that’s what everyone calls me,” he says, LITERALLY EVERY TIME HE INTRODUCES HIMSELF, after waving his badge in the face of whoever he’s talking to), you’re a profiler – an expert in the twisted minds of serial killers. You’ve come to the town of Greenvale, Washington to solve the gruesome murder of a local teen. You’re also a little bit crazy.

York is based on Kyle MacLachlan’s Special Agent Dale Cooper from David Lynch’s bizarre 1990s television series Twin Peaks. Cooper too was an FBI agent in the eponymous town, trying to solve the murder of a local teen. And Cooper was also a little crazy. Both Cooper and York carry on conversations with nonexistent people – in the game, York is always talking to an imaginary friend named “Zach,” who we’re supposed to assume is the player. York believes he can predict the future based on the pattern cream makes when poured into his coffee. His methods of investigation are peculiar to say the least. Whereas Dale Cooper from Twin Peaks was odd but likable, York is a socially retarded dick.

Deadly Premonition is incredibly weird, due in no small part to the weirdness of the protagonist. And it’s intentionally weird. The game is very well translated, and the acting is passable – the localization team did a good job of understanding that this game is supposed to be more than a little surreal.

I guess the best term to describe Deadly Premonition is “survival horror.” Here particularly you see a lot of Japanese influence: people bent over backwards, crab-walking toward you, scooped out eyes, shit growing out of the walls, stuff like that. Of course, it’s unclear whether any of these things are actually happening or they’re all in York’s mind. The smart money’s on the latter.

The game’s basically broken up into two things: getting your ass handed to you by monsters, and walking around investigating. They’re wildly different play experiences.

The ass-handed part is pretty standard survival horror, with the addition of even worse controls than you might usually expect. Traditionally in first and third person games, you go where you look – this is true whether using thumbsticks or the keyboard and mouse. Survival horror rarely does it this way. And Deadly Premonition has even stranger movement mechanics than that, but to be honest, once you get used to it it’s really not that hard. The controls are definitely the weakest point of an otherwise fascinating game, and the 360 controller isn’t well-utilized, forcing you to go to the game’s main menu to access stuff that should be a button-touch away. But the first, oh, four or five hours of the game are mostly action (insofar as survival horror is ever very actiony), and it gives you lots of opportunity to get the hang of the controls.

One thing that I do loathe is the game’s occasional dependence on Quick Time Events to manage scripted combats. You’re hounded by… I don’t know, like an axe-wielding evil Jawa or something, for much of the game, and avoiding him sometimes requires QTEs that will leave your thumbs in agony. These moments are very cinematic, but they hurt.

What’s most interesting about Deadly Premonition, though, is that those first four or five hours aren’t really representative of the game. It has survival horror elements, to be sure – but this is a game that refuses to be classified. Once you actually get to the town and begin your investigation, you understand what kind of world the creators have made here, and it’s really quite intriguing.

There are maybe 50 people of interest in Greenvale – some suspects, some just characters, and true to living world form, they go about their daily business. You have to know who they are, how they relate to one another (and the victim), and what each might have gained by killing this girl. Deadly Premonition is a full-on open world, where you roam the town, talk to people, conduct investigations, and search for clues while they conduct their lives. You want to ask somebody something and it’s around noon? Chances are she’s at the diner getting lunch. Need to snoop around someone’s house? Best to do it while they’re at work. You spend a fair amount of time driving around town, running errands, and trying to stay on schedule for scripted events, when you have to be in a certain place at a certain time. 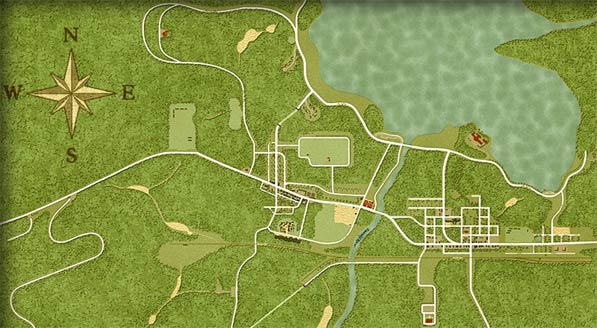 Only seven or so hours in, I can’t tell you yet whether the “living town” aspect is as broken as it was in Oblivion or Fallout 3 or Pathologic. I can tell you that this game’s clunkiness does extend to much of the open world stuff, as you must sleep and eat as well as investigate. You even have to change clothes and send your suits out to be cleaned. Well, you don’t have to, but the game warns you that no one will want to talk to Pig Pen-like character in a nasty suit, shrouded in a mist of flies. And there are times when you go somewhere, expecting to be able to do something (like eat lunch at the diner), and there’s no way to do so.

I think the complaints leveled against Deadly Premonition’s controls are unfair; yes, the controls are weird, but so’s the game. For those who were driven away, I suspect it’s partly the controls, but more likely the increasingly long stretches between survival horror action sequences, when you’re wandering town trying to solve the mystery. That portion of the game can get dull; and it’s made much more unpleasant by a soundtrack that is so incongruous with the action I have to think that some mistake was made and this game got the wrong music.

Deadly Premonition is one of those forgotten games that materialize in the later stages of a console’s lifecycle. If you looked at the box you’d assume that it’s pure survival horror, and the boxy graphics hardly do the 360 justice. This is a game you’d likely pick up to look at while browsing at Best Buy, then put right back down. But for all its many idiosyncrasies, I must say that once again Ben steered me right – Deadly Premonition was something I needed to check out, and I’m glad I did.