Mortal Online, currently in Open Beta, is a new massively multiplayer online RPG by the Swedish video game developer Star Vault.  Inspired by Ultima Online, the game places significant emphasis on sandbox-style game design.    Unlike other MMOGs, MO proposes to offer the player a level of freedom yet to be experienced in the current generation of World of Warcraft clones…

In contrast to other MMOGs, Star Vault want the player to be as free as possible, to truly undertake anything they wish.  As a result, MO has minimal game rules.  A player will be able to carve out their own path, with their actions physically impacting the game world, dependent on the type of player they wish to become.

To distance itself from the existing WoW model, and in stark contrast to it, Star Vaults design choices are what many MMOG fans have been pining for; the spiritual successor to Ultima Online.

Legendary monsters and quests will not return once killed or completed. There will be no instanced dungeons of any kind, to repeat endlessly. There are no character classes, only the initial character traits you choose. There will be few safe heavens as MO steers away from sanitizing the player experience, with all player skills learned by direct action, as opposed to being paid for.  While player and guild housing, built by the player, will be a possibility.

Undoubtedly on paper, MO represents the directional shift the genre has desperately craved for over five years.  Yet it has taken a small Swedish developer to realise such a change is needed; Star Vault acknowledging that the genre has so much more potential than is currently being demonstrated. For years I have searched in vein for an MMOG that bestowed the same sense of freedom and consequence as Ultima Online, yet having exhausted what the market has to offer, I have failed to encounter one which is little more than a linear, gear progressive experience, where its only possibilities lay in the repetitive dull drums of instanced encounters, egotistical item conscious teens and penned in redundant game worlds.

Here is a game that is proposing to change all that.

A lengthy patch and an entirely pain free installation process later, I was finally navigating the games menus.  Having played many MMOGs during Alpha and Beta stages, I am more than mentally prepared for a lack of polish and sparkle. The final layer of finish to MMOGs is often only added several months before the game is ready to be shipped.

Selecting my primary race, and ancestry (a possibility of four ancestors concluding your fate) I began to toy with the physical changes you can make to your character.  Unavoidably, 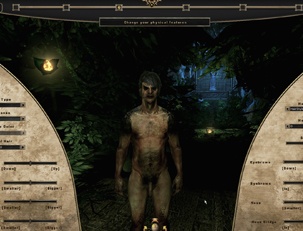 the first thing I notice was the nudity, and the glorious anatomy of the human form that has been so carefully created.  Genitalia is fully modeled, and instantly sets the mature tone for the game. I regrettably, and thanks to previous experience, pictured the congregation of nude teens fornicating, and prayed Star Vault keep their animations clean.

After much tinkering, and despite the limited selection of hair styles and body colours, I settled for a female, red skin toned half breed, who was 18.  She wasn’t pretty (not helped by the poor graphics engine) but then again I didn’t intend for her to be kind to people either. I choose my character trait of “Scout” and name my character one my many pseudonyms before selecting a starting location.

I must stress the game at this stage of its development cycle isn’t hugely attractive.  The scenery is relatively bland in appearance and particularly sparse, while I have a niggling feeling (and hope) that the final lighting hasn’t yet been implemented the cities however do look reasonably well.  Thankfully the server is stable, the land mass is large and latency concerns are none existent.

The interface is basic in appearance (I have on good authority this is going to improve over the next several patches) with an action bar anchored across the top-centre of the screen.  Sub menus just below give access to principal player tools such as your inventory and skills, while pressing “Z” allows you to use your mouse freely to select any of these sub menus, but will stop your player from moving.  Shortcut keys for each sub menu allows you to open them whilst moving, thus avoiding the necessity to limit your player movement while multitasking.

A player help function provides basic information needed to get started, covering the fundamentals of game play, but little else.  There is notably no opening quest or cut scene to set the focus of your existence.  There is no guiding hand or inventory note to give you a perspective on where to even begin.  It is incredibly daunting, but this could be subject to change as Star Vault rev up to release.

After speaking to passers by for over an hour, learning as much as I possibly could, I decided to set the focus for my character.  I needed a bow, a companion who could fight alongside me, and some money.  The first shock however was that in order to undertake certain actions, I have to type them out.   When taming an animal, I have to target it by pressing “tab” and then type “tame”. It’s cumbersome and archaic, and I would have hoped that we were years past interface methods such as this.

Equipping my pick axe and my wood cutting skill, I approach the nearest tree and begin to harvest away.  I’ve been told that I should be able to sell the wood, to acquire a book on Bow Craft.  As I press “1” on my keyboard, my character from the first person perspective lurches forward with his axe into the base of the tree.  I’m informed via the chat window that there isn’t much wood, but my inventory slowly begins to fill.

The animation, like my own characters movements, is clumsy and hasn’t been streamlined.  Chopping too quickly, before the first animation is completed results in an awkward rigid mess, while pressing a single key for over an hour and experiencing the same clumsy, dull animation, staring at the base of a tree, is not particularly good fun.  My gathering skill however has increased, and I now have enough wood to sell.  Regrettably though, the sun has risen and is now reducing my frame rates to unplayable levels.  I am unsure if it is as a result of the bloom, a memory leak when staring out over the water, or both.  I subsequently have to run to the book seller staring at the floor.

Purchasing the necessary book, Star Vault have yet to implement a streamlined sale method.  I have to place my wood into the NPCs trade window, manually count the amount of coin the vendor owes me, before validating the sale, instead of the entire process being automated.  Equipping the book  I’m informed that it will take five hours to learn Bow Craft.  After initial play of four hours and forty eight minutes, I decide to log off for a break.

I look over at my note pad, and notice the sheer length of issues that the game has, and realise that Star Vault have a daunting, almost impossible task on their hands.  My list of issues is long, yet the game has so much potential.  I cannot help but feel saddened that Star Vault are unlikely to deliver a polished product, to a high standard. They are simply out of their depth. 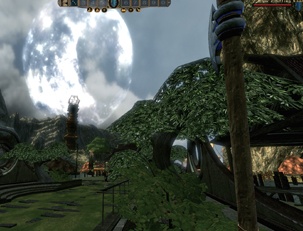 True lighting needs to be implemented, animations need to be entirely streamlined or completely redone, combat is sluggish and the player is punished too harshly for drawing their weapons; reducing movement to a painful crawl when wielding.  A lack of direction is a benefit and a significant draw back in equal measure.  Irrespective of how sandbox a game is, there must at least be a tutorial to guide the player into the world, while Star Vault must remove typing as an action method, and instead implement actions such as “tame” that are physical and selectable.  Memory leaks need to be rectified, and the core principals of crafting need to be revised.

Is it fun to stare at a tree for hours on end in order to acquire the resources necessary, repeatedly pressing the same key over and over, while the tree itself fails to alter? Would it not be beneficial to have the trees disappear and have players replant them, while also making the camera pan to third person to at least allow the player to see some of the world around them.  Pressing the gathering key once should automatically loop a single animation until pressed again. (inevitably, if this isn’t implemented you will within days have scripts to undertake it for players anyway)

As it currently stands, MO has a long way to go before I would consider it fit for release.  The amount of work needed is huge, and far too huge for such a small development team. It only further leads me to believe that it is only Blizzard that is capable of delivering the fundamental ideas Star Vault have proposed.  MOwill falter hopelessly as a niche product unless a significant number of patches are implemented in the coming six months.  These patches need to rectify core game mechanics before Star Vault map out and implement further features.

If Star Vault do not make necessary changes, and fast, they may find their game becomes yet another MMOG which fails due a developers over ambition.  I smell another Darkfall on the horizon, however I will keep you posted how I get on over the next few months. (10 hours playtime at the time of publication)