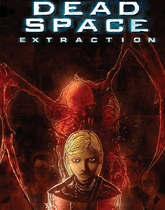 A competent rail shooter, that thanks to Visceral Games’ strong IP, is arguably the best light-gun experience on the Wii . Although there are some issues and poor acting issues aside, the game is highly enjoyable. Unlike other rail shooters however, I must stress it isn’t all instant action…

Dead Space: Extraction (DS:E) is a survival horror rail shooter developed by Visceral Games.  As a prequel to their much loved and well received Dead Space, Extraction takes place before the events of the original, and revolves around a group of space colonists from Aegis VII, fighting against the infection of Necromorphs that are created when the Red Marker is first removed.

The story unfolds as a split narrative, with a crew of mine workers (and you playing as Sam Caldwell) helping to extract the Red Marker from Aegis VII.  In true (and predictable) horror style, the crew quickly succumb to an external force and begin to suffer hallucinations and delusions, including you.  As you work your way deeper into the depths of the excavation outpost, you are forced to kill many of your co-workers in self defence, as they turn against you.  You begin the second chapter as Detective Nathan McNeil, who has begun working on the case file for the series of subsequent rampages around the colony, after the games opening events.

Unlike other rail shooters, DS:E surprisingly places a much greater emphasis on narrative, with the opening sequence as Sam Caldwell heavy in dialogue and set pieces but with little in the way of shooting.  It’s a refreshing change.  It is the graphics however which actually drew my instant attention.  The Wii isn’t noted for its hardware capabilities, but Visceral Games has really made great effort in making use of it’s limitations.  Despite some frame rate issues, particularly during the first ten minutes on the Aegis VII surface, the graphics are solid and gloomy, while the lighting is highly effective.  The game feels particularly haunting when using only a glow worm for a light source, and the lack of 1080p crispness seems to only help in setting the jittery mood.

In terms of controls, the game remains relatively faithful to similar Rail Shooters.  The Wii remote understandably acting as the gun, with the Nunchuk as utility.  Visceral have thankfully added an extra layer of depth for the player to contend with.  Ammunition is displayed as a number underneath the cross hair, which alerts the player once a clip is depleted; turning from White, to Yellow, to Red dependent on how little is left in your weapon.  A single press of the B button will reload painfully slowly, however by pressing B once more during a snap-window on the crosshair, you will reload the weapon instantly.  Although not a new mechanic, it is simple and effective enough to give the player an additional source of panic, particularly when five Necromorphs are charging at you. 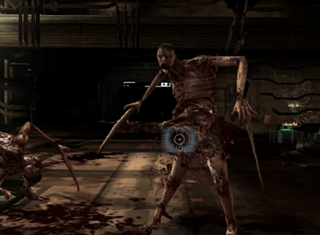 Swinging the Nunchuk forward in rapid succession will satisfyingly activate your Plasma Cutter, which can be used when reloading for those oh shit! moments, while shaking the Wii remote activates your glow worm.  Turning the Wii remote onto its side will also activate secondary fire functions.  Pressing C will fire a stasis shot to slow a target or world object, but with only three available, against large groups of Necromorphs things can get nervy should you miss.

The ace to the control method however has to be the Kinesis that all colony employees Rigs have.  By targeting a specific object, and pressing A, a beam of telekinetic energy will quickly snap onto an object, and draw it back to you, where it can then be collected or fired away.  This interaction works great when undertaking minor physics based puzzles, or collecting objects in those hard to reach places.

Further to my surprise, was the innovative use of the Rivet Gun and Wii remote during certain set-pieces.  The Rivet Gun in secondary fire mode becomes a working tool, which the player must use to secure barricades in order to stop Necromorphs.  In addition, when accessing control panels the player must trace a series of circuits with the Wii remote in order to activate markers.  Surrounding the circuits are barriers, which if touched harm the player and reset the circuit line.  Only once all markers are lit will the access point open.  I can assure you that attempting to keep a steady hand when enemies are hoarding round you is not easy, and makes for very tense moments. This complimentary, subtle use of the Wii remote and its minor game innovations sets DS:E apart, and is the spark Rail Shooters have been desperately crying out for.

Returning to narrative methods, DS:E takes much from System Shock 2’s foundations.  Throughout the game the plot can be progressed through data-logs and recordings left scattered throughout the colony.  Not always easy to spot, they are often tricky to target as you move quickly.  However, if successfully tagged the game kindly pauses to give you enough time to read all the information, which often have smaller plot strands that point towards the events you are experiencing; it’s a nice touch and shows Visceral Games commitment in attempting to avoid being classed as a House of the Dead clone.

In terms of voice acting during the games many in game cut-scenes, it isn’t the finest, but it isn’t any worse than Resident Evil 4’s either, and so for the most part is tolerable despite an eclectic mix of accents.

The set pieces and locations are as you might expect for a horror set in the future.  Dimly lit corridors, gloomy underground tunnels and plenty of grilled walk ways are all present and correct.  Visceral Games have however given the player at regular intervals choices of routes, that may not necessarily end up beneficial to the players cause, so choose wisely.  The player can also at times free-look using the Nunchuk’s analogue stick.  Although not overly used, it does go someway in disguising the game being on rails, and if you are quick enough will usually give you plenty of pick-ups, including data logs. 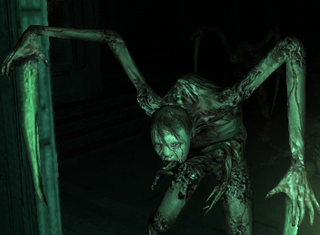 Where weapons are concerned, they can be automatically improved upon through weapon specific modules that are scattered around each level.  Sadly, you don’t get the ability to decide how you improve your weapon, and generally I haven’t been able to see much marked improvements, but I trust they are working.  To stop players having an unstoppable arsenal of weapons, only four can be equipped at once, leaving the player with a harsh choice depending on the situation.  The Flamethrower is particularly satisfying, with secondary fire modes on all weapons providing that extra power at a significant cost to ammunition. Each weapon also has heavy sound effects that leave them satisfying to use.

As you progress through the game, a breakdown of all your statistics, achievements and unlocks within each stage is recorded (often highlighting my total lack of accuracy) while it also displays any data or pickups you missed, so should you feel the need you can return back to the stage.  A series of animated, graphic comics are also available to unlock after each stage, which further develop the story.  I won’t spoil what they contain, but they are definitely worth watching and is yet again another example of Visceral Games commitment to their IP and to further the Dead Space storyline.

Overall, DS:E is a very polished competent rail shooter, that thanks to Visceral Games’ strong IP, is arguably the best light-gun experience on the Wii .  Although there are some frame rate issues (nothing overly drastic) and poor acting issues aside, the game is highly enjoyable.  Unlike other rail shooters though, I must stress it isn’t all instant action.  As mentioned previously, there is a great deal of the time spent watching in game cut-scenes as you and your group struggle against the Necromorphs.  Some players with short attention spans may find this off-putting as they get itchy trigger finger, however when the action does arrive, it arrives in abundance.

I played the game on Hard and found it challenging but not impossible, and would certainly recommend people intending to play the game to do the same.  While the added extra’s within the game, and specifically the Free For All mode and comic unlocks add extra longevity.  DS:E is a cracking game, and especially for existing fans of the franchise.  For the £11 that I paid, you genuinely would be hard pressed to find better value for money on the Wii.