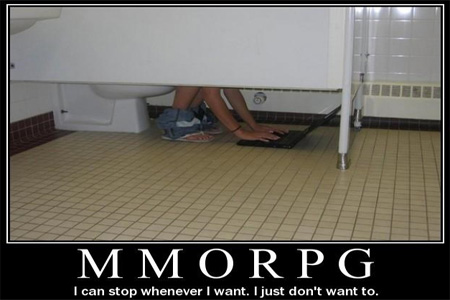 The MMO market is a very strange beast, and one that analysts don’t fully understand yet. Why not? Because there are still mysterious depths to be plumbed. Years ago I wrote an article about virtual worlds in which I expressed shock at the fact that Lineage had four million subscribers. Now the gorilla is World of Warcraft, and all the big companies are trying to cash in on what they perceive as the MMO money bin. In some ways they will be successful, but in others they won’t.

I advise game developers from time to time, and I have had many clients who’ve started their meeting with me by saying “we’re working on an MMO.” In some cases these are little four-person startups with no publishing contract.

They almost always follow that remark up with this one: “we’ve got a WoW-killer here.”

First of all, Activision/Blizzard CEO Bobby Kotick, who I do hate but who is right every now and then, once said that to compete with World of Warcraft, you’d better be prepared to invest a billion dollars up front. I don’t think that’s much of an exaggeration. MMOs take much longer to build, require much larger teams, and of course demand an immense hardware infrastructure that – say it with me here – not one MMO developer in history, including Blizzard, has ever been able to provide on Day Zero. Anyone who’s ever played an MMO at launch knows that the first weeks are a crazed morass of server crashes, hotfixes, crushing lag, unexpected disconnects and overwhelmed call centers. So it’s not just the cost of producing the game, it’s the hardware cost and the need for a slush fund beyond Day Zero to bring whatever hardware is in place up to snuff.

The second reason no one has a World of Warcraft-killer is because there are several out there now, some of which have already failed. Age of Conan, Aion, you name it, there’s not a significant shortage of traditional third-generation MMOs. People tend to drift back to what they know, and what they know is WoW. Perhaps more salient to the argument is the suggestion that a new MMO developer shouldn’t try to kill World of Warcraft.

If we take the first generation of MMOs as Ultima Online, and the second as Everquest, Anarchy Online, Asheron’s Call, etc., then the third generation includes games like World of Warcraft, D&D Online, Everquest 2, City of Heroes, EVE Online, and so forth. The important thing to recognize here is that there was a generational shift between second and third; not only in technology but in game design.

Why did Blizzard become so dominant with World of Warcraft? Well, a couple reasons. First, they used a known and beloved franchise with a long history and a lot of life left in it. Warcraft has been around for a while, and most longtime PC gamers have played at least some of it. But more important than that is how Blizzard made the game. The company bided its time, watched other MMOs come and go, carefully toting up lists of what worked and what didn’t. When they sat down to produce WoW, they essentially reviewed everything from the second generation that was bad and fixed it, then mixed in everything from the second generation that was good and called it World of Warcraft.

In all honesty, at the beginning of this MMO generation, my money was on Everquest 2. I figured that the existing user base would propel it into success, while World of Warcraft would do well, but only in a pretty modest sense. I didn’t think Blizzard had the infrastructure to compete with SOE and I wondered if something as ambitious as an MMO was within the company’s capabilities, especially since Blizzard is a famous perfectionist unwilling to ship until the game is excellent. So obviously I was wrong there.

To dethrone World of Warcraft at this point, developers need to stop thinking about “how to kill” the game. They need to think not in terms of competition, but in terms of what the future of MMOs should look like. In a word, they need to do what Blizzard did when it first threw its hat into the MMO ring back in the day. Because any game that’s designed with “killing” World of Warcraft in mind is going to inherently be a clone of it, either consciously or unconsciously. It’s the equivalent of when young developers say to me that they’re working on a game that’s “like Halo, but.” That but will burn you every time, friends.

The final reason that it’s silly to try and produce a WoW-killer is that to every analyst’s surprise, the market is apparently not saturated yet. Companies can make a very nice profit on an MMO with 300,000 or a million subscribers. Heck, look at CCP, whose EVE Online is keeping them in beautiful financial shape while really existing as only a niche product. They’re doing so well, in fact, that they’ve announced Dust 514, a shooter-based MMO that will tie right in with the EVE universe.

The fourth generation of MMOs is going to look and play differently than the third. Unless you’re Eskil Steenburg, whose upcoming procedurally-generated Love is in closed beta right now, it will still take a lot of people to develop a big MMO. And established franchises will probably still have more sway than unique IPs.

Blizzard is already working on a new MMO, and I concur with Lewis B when he said that he doubts the company’s new game will be set in the Warcraft universe. Will it be World of Starcraft? Or something else entirely? One thing to consider is that the winner of the previous generation has not, historically, held the crown in the next. Admittedly we only have a one-generation sample to base that on – SOE’s Everquest was king, but the company’s third-gen outings, like Everquest 2, Star Wars Galaxies, etc. have nowhere near the regular user base of WoW. Will Blizzard be able to keep on keeping on? Time will tell.

Nearly all boxed MMOs sell heavily at the time of release, but MMOs are not traditional video games. Traditional games have a very fast burn time – in most cases, a game’s off the shelf in fewer than six weeks, and consigned to the bargain bin in 3-4 months. You can predict success or failure based on Week One unit sales. MMOs don’t work like that. It’s the subscriptions that make the money, and time and again we’ve seen happy MMOers rush out to grab whatever the latest thing is, only to wander back to WoW when they get tired or homesick.

Another key question is what Generation Four is going to look like. Are some of the games currently in development – Star Trek Online, Huxley, Final Fantasy XIV – are any of them going to innovate enough to be considered a generational leap? Or are they holdovers of the third generation?

I don’t play MMOs, so frankly I don’t care. But this segment, this market-within-a-market, will remain an enormous breadwinner for the industry so long as it continues to innovate.