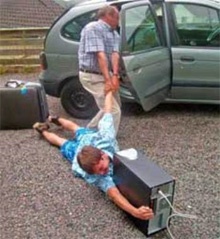 I won’t even encourage the foolish idiocy of a psychologist’s new theory that videogames are physically addictive, like heroin, alcohol, and cigarettes – i.e., quitting them once addicted causes physical withdrawal symptoms that can, in some cases, even lead to death.

No, that guy’s a laughingstock without my help. But I must express my outrage over the rape of the English language we see every day. We all have pet peeves. One of mine is the use of the non-word “addicting” when one means “addictive,” and sites around the internet are now spewing the headline “German Shrink Says Videogames are Physically Addicting.”  That’s a gerund. It’s also not a word. Something cannot be a gerund; as a non-finite verb, a gerund describes a state but does not define it. As in, “that psychologist is fucking retarded.” He’s not retarding, people. Grammar. Grammar, god dammit!

Also: conservativism, not “conservatism.” As if Republicans would want to be associated with conservation efforts.

11 Responses to AddictIVE. -IVE, You Bitches.