I’ve been awfully positive on Tap-Repeatedly lately, mostly just writing little blurbs about indie games I have enjoyed. I have more of those! But first a digression while I download an Android/iPhone game called Transformers Legends, and then rant about it.

I am a Transformers fan and I play the games with the Transformers in them, though I rarely write much about said games. Dix wrote a great review of Fall of Cybertron which is a Transformers game worth playing. I hadn’t really bothered with Transformers Legends at all at first, though, because it is not a nice big shiny console Transformers game. Rather, it’s a tiny free-to-play Transformers game on the mobile phone, so probably not something anyone other than a true megafan would worry about.  But then somebody said the magic words, and those words are Beast Wars. So I grabbed my phone and immediately downloaded Legends.

So remember when I reviewed the Deadpool game, and I was all no but you don’t understand, because blah blah blah Deadpool Deadpool? Well, blah blah blah Beast Wars Beast Wars. There, now you’re caught up. I’m a huge fan of this show to the point where it’s kind of embarrassing. I even bought that tragic Beast Wars fighting game and then played it with actual people and was pretty convinced it really wasn’t that bad because it at least has some of the same voice cast in it and that’s pretty cool right?

So I downloaded this Transformers Legends card game. I am a pretty savvy with-it game player who understands how games work, but please help, I have no idea what is going on. 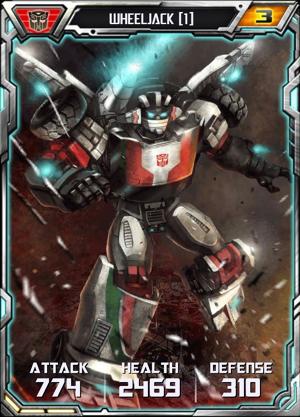 The first thing I have to do in Transformers Legends is pick if I want to be an Autobot or Decepticon. Neither of those things are Beast Wars but okay, fine, I get it. I think about it for a moment and then choose to be an Autobot. Then I get three Autobot leaders to pick from. Except none of them are Autobot leaders, like Optimus Prime. They are actually just random Autobot squad members. So, whatever, I will choose Wheeljack; he’s a pretty cool guy. As you can see from looking at that card, the cards have a bunch of random numbers on them that seem to bear no relationship to anything.  As if Wheeljack having 2469 starting health points is somehow meaningfully different from him having 2470 starting health points. Even Kotaku commenters are looking at these cards and calling bullshit on this.

A cool thing is that when I look into this on my phone there’s a neat 3D effect. When I move the phone around, I can see different sides of the robot. This is a pretty awesome trick using the smartphone and I feel pleased for a moment. Then the game shows me that I can take the alt-mode version of a card, and the robot-mode version of a card, and combine them using a “transscan” to make the card more powerful. So let’s do that now.

Great. Then it shows me that I can battle other players. This is a drill I’m somewhat familiar with with other social games. Pick a random person, who won’t really be penalized for it. I pick some person who probably never played past making their initial deck and click the fight button. 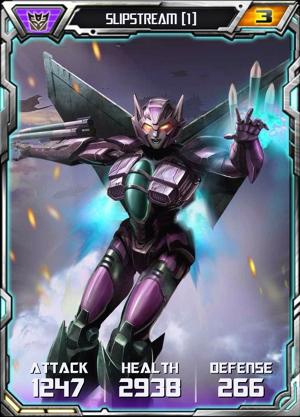 Now I can go to the Space Bridge and get some more cards. I push the Space Bridge button and there’s a neat little video and then I get more cards. The best card here is Slipstream. I have no idea who this person is because I am an old, so I click on her info. It says she is the female clone of Starscream. This makes sense, particularly the fact where the best card I would get would obviously be a character that would irritate me if I were still active in the fandom. But she’s a rare card and pretty good so she’s my leader now which I guess now means I’m Decepticons? This turns out to not matter.

How do I Beast Wars? I shout at Transformers Legends. A small button says I have four days left to Beast Wars. Holy crap: I should get on that! I push the button and it leads me to a place where I click on missiles to defeat bad guys. Then it says I have discovered a boss: Rattrap. Hooray! Rattrap is Beast Wars. But all I can do with Rattrap is fight him. That makes sense, I guess, if I’m a Decepticon now, so I try to fight Rattrap. It goes back to the cards-shooting-lasers layout. It’s a Level Zero Rattrap and I kick his sorry skidplate. Then I get rewarded with some junk like “Bronze Medals” and “points.” I don’t actually get a Rattrap, but okay.

I try again. I encounter another boss! … Oh, it’s Rattrap again. Well that’s fine. I already beat him once, so… um, except this is a Level One Rattrap, and suddenly he’s destroying all my cards (I guess he is chewing on them, or something, but there is a “shing shing” sword sound effect) and would I like to call for help?

I check all the menus and it turns out that I might get rewards for beating Rattrap, if I were dedicated enough, but I got 15 points for my first Rattrap kill and it takes 100,000+ points to get any Beast-Wars related reward at all, which is a Scorponok card. Alternatively I can attempt to score on the ranking player charts. I currently rank somewhere in the 20,000ths of players playing this episode, but I’d have to be ranking in at least the 10,000ths to get any interesting reward (that Rattrap card). Of course, I could bypass all of this with Real Money, but even how to do this isn’t exactly clear. Mobicoins, which are displayed with a gold coin icon, are obviously premium currency, but if I had Ruby Medals I could also trade those in for a Dinobot card… which is good but how do I get them? I think I got some from battling Rattrap – let’s see – Dinobot costs 500 of them and I have … nine. Most distressingly to me personally, I don’t see the word “Tarantulas” anywhere at all.

I decided to put Transformers Legends aside.

Then last night, when I had stopped bothering with it, my phone excitedly buzzed. I got a message. “Optimus Primal has joined the battle!” it said excitedly. This is relevant to my interests, because MUNKY NOT TRUKK, so I immediately pick the game back up again in spite of the fact that I should already know better.

The game then says it’s updating content, and I need to wait. And wait. I have a top-of-the-line Android, but all this does is hang. It was still hanging this morning. That was about the point where I did actually get angry at it. Show me the monkey, Transformers Legends!! After about an hour of waiting, I finally got a battle in with Optimus Primal. I did it by joining in with other players who were also battling Optimus Primal. In order to have much of a chance, I have to upgrade Slipstream, which involves feeding her my other cards like some kind of Decepticon cannibalism. Then Optimus Primal goes “shing shing” and kills all my cards anyway. Please wait an hour for more Battle Cubes to try again – or pay money! But Optimus won’t stick around here for more than twenty minutes, so probably pay money. Also Optimus has 287,730,191 HP, and your last attack did 210,764 damage, so you might want backup. 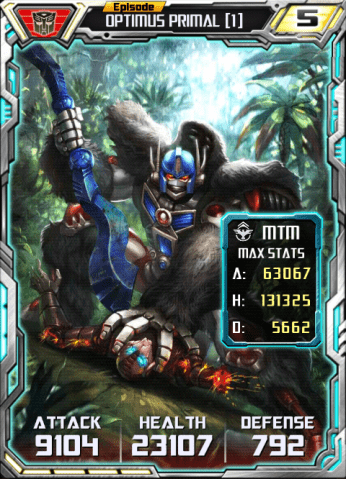 There is a trick to the boss fights as it turns out, and it’s a kind of Volunteer’s Dilemma. We all have limited resources to pool against any given incarnation of Optimus Primal. On my own, I stand no chance of beating him, but with eight other people, perhaps. We’ll all get a share of the spoils if he goes down.  But we all have to put in a certain amount of limited resources to contribute. I’m a brand-new player and can’t do any appreciable damage to him, but I can try to guess at a player that might, toss a few resource cubes at that battle, cross my fingers, and free-ride off of that player’s success. But if everyone tries to free-ride, nobody gets anything.

I started out totally bewildered by this game’s mechanics, but the more I play it the more I understand. There’s a dozen different currencies, and about five different ways to upgrade any given character by feeding other characters or currencies to them. The combat screen will never make sense but it never has to; just pit my numbers against the other person’s numbers until my numbers go higher at last and finally I win things. Then wait. Because I am out of Energon.

There’s hundreds of free to play games like this out there. This one is the Transformers one. You probably shouldn’t play it. But I am, because I’m only 17815 points away from that Scorponok card and even though he’s not a great Predacon that would probably be okay, right?