So says Randy Pitchford, King of Gearbox and inheritor of 3D Realms’ sloppy seconds. With Duke Nukem Forever finally gold after fourteen years in development, the studio prez is on the PR trail for a little preliminary damage control. Not surprisingly for someone as unoriginal as Pitchford, his approach is… review scores don’t matter.

This is what he says, from Eurogamer:

[…I’m not worried about the critical reception] …We also know that it’s a very difficult problem for journalists, so there’s going to be very few of them that decide to go perfect.

It leaves it in this band there where you’re going to see a lot of 8s and 9s, and the number in that range doesn’t matter. Even if some people start to skew in some 7s in there, it’s not going to matter to the actual results in that band of outcomes.

We know the game’s great. Any journalist that decides to try to go… to lowball it is gonna be held accountable by the readers.

Randy, Randy. Randy. Seriously, dude. The English language is a privilege. Grammar is a beautiful thing, and sorely maltreated by your final remark. Let’s look! 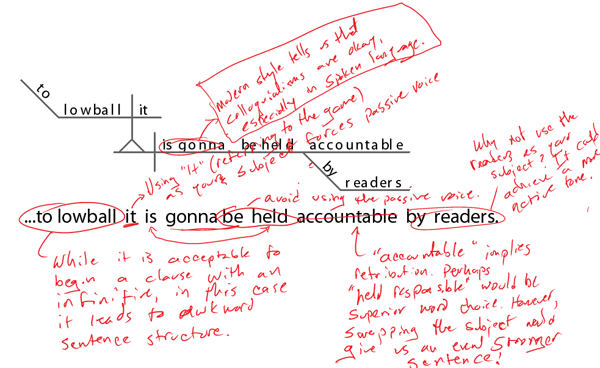 Instead, may I propose a more compelling and structurally sound alternative? 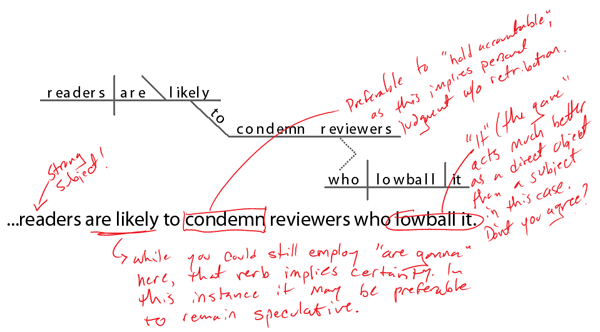 Yes, there we go. Much better.

More to the point, studio directors who say “reviews don’t matter” are a lot like struggling politicians who say “polls don’t matter.” It doesn’t matter that the Earth revolves around the Sun, but it’s good to know as a point of reference.

I’m sure Randy Pitchford is a delightful person, but I really can’t stand his behavior. Certainly, public remarks like those above are not abnormal for game industry people, but to my mind it would be advisable instead to rise above the fray. Indeed, to do so would garner respect and further validate the stated opinion. Unfortunately people don’t think before they speak.

Here’s what Randy should have said:

Well, I can’t be sure how the reviewers will react. We think the game is great – of course we do – but we’re probably not the most impartial judges! [pause for self-deprecating laugh]

But to answer your question I’ll say this: I hope the reviews are good. I believe they’ll be good. I’ll even go further – I believe the majority of reviews will be in the 8 to 9 range, with a few respectable 7s. Certainly some reviewers will focus on the game’s development time and roll out the tired Duke Nukem Forever jokes. Some will choose to judge the game on its reputation rather than its merits and assign a low score; some may just not like it. That’s fair. But I think gamers and reviewers who approach DNF looking for a hell of a thrilling piece of entertainment, most of them are gonna enjoy what they find.

Was that so hard? I mean seriously people.

I don’t know if Duke Nukem Forever will get good or bad reviews. Offhand I’d speculate that they’ll average out to mediocre. As mentioned during the lively forum discussion on this topic, the real danger is that Gearbox, and 3D Realms before it, forgot what made Duke Nukem 3D so memorable. It wasn’t the character, it wasn’t the strippers, it wasn’t the dick jokes. It was the game.

D3D was a really, really innovative game. It introduced play mechanics so foundational to today’s shooters that younger players would be hard pressed to imagine an FPS without them: jumping, vertical freelook, secondary fire, destructible terrain, interactive objects. There was a time when shooters didn’t have those things, people, and that time was called “The Time Before Duke Nukem 3D.”

That belief would be in error, and no amount of spinning the irrelevance of scored reviews will change that.