In October of last year, Valve announced their second project of 2011 would not be Half Life 2: Episode 3 or Half Life 3 or Just Release Another Half Life Game Already, Goddammit, but DotA 2. Much of the gaming world’s response amounted to a collective, “Wha…who…why would…really?”

I don’t really know that, of course. That was certainly my reaction. I was stunned. Valve doesn’t make real-time strategy games. In fact, they‘ve made nothing but exquisite first person shooters since 1998’s Half Life.

Now, I’m no fool. Valve clearly models a level of competence and dedication to their products far beyond that of even a good developer and publisher. They test their games for both stability and for fun factor, then they test them again, have a meeting, and retest them. I know I sound like a fanboy, but the difference between a “fan” and a “fanboy” is the latter will stick by his or her favorite regardless of the product’s quality. Valve has made nothing but fun, amazing games with a strong support network for almost 15 years now. They have earned my faith and have never, ever let me down. They have repeatedly shamed me for ever doubting any decision they’ve made.

The first version of DotA, or Defense of the Ancients, premiered as a Warcraft III scenario designed by someone known only as “Eul” and was further developed by Steve Freak and other members of the community. A person known only as “IceFrog” still updates the game and is currently working with Valve to develop the sequel. 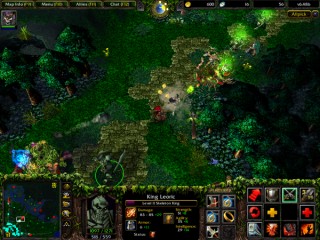 The beauty and fun of DotA rests in its simple premise. All action occurs on a map familiar to anyone who’s dabbled in Warcraft or one of its many clones. Two teams, five heroes per side. Each player controls a hero. Each team seeks to use the three main routes (usually called lanes) to destroy each other’s base. In the way are towers, mindless Creeps spawned and controlled by the game, and enemy heroes. Heroes gain experience and money by wiping out creeps, heroes, and enemy structures. As heroes gain experience, players can choose from a small arrangement of new abilities and augmentations. Players can also spend money on magic items of staggering variety.

And that’s it. There’s no heroes to control, no resources to gather, no building queues. It’s pure PvP action, with all of its highs and lows.

At its best, DotA was better than any Warcraft game. When I stopped playing, there were at least 40 different heroes available, each with different powers and abilities of varying complexity. In a game, however, your hero will start with only one ability of his eventual three. Only by leveling your character can you unlock the additional two powers as well as increase their power. DotA creates the satisfaction of leveling in an MMO without the endless hours of grinding and divorce proceedings. You kill stuff. You get money and experience. You buy stuff to kill better. 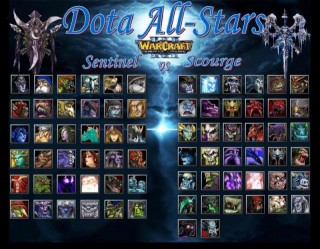 At least 62 different heroes. You will die screaming.

Or…you die. A lot. At its worst, DotA abandons its new players to the Learning Curve Mountaintop to be eaten by cougars. While the mechanics of controlling a hero are simpler, the nuances involve knowing the respective hero’s abilities, when to push, when to fall back, and which items to buy. It would be one of the classic “seconds to learn, a lifetime to master” games if it weren’t for a rude online community and a brutal learning curve.

When a player kills another player, he earns money and experience. Simple and fun. But when a new player or players repeatedly dies to the same player or players, it can sabotage an entire team. This victim “feeds” the enemy through bad play, creating a situation in which the enemy heroes inordinately powerful. Typical DotA teammates on the victim’s team will then flame the newbie. They won’t even bother to be creative, preferring the tried-and-true path of “urghey” and “ura fucking noob.” My first experience with “l33tspeak” was with DotA. That is not meant as a selling point.

While we’re on the topic of why Internet people suck, let’s talk about the hated “leavers.” Leavers abandon their team by disconnecting as soon as the team struggles, making a 5v5 game a 5v4. Or they leave because they can. Or just because. There’s no penalty for the scum that abandon their team, leaving their former teammates to do the best they can while down a man. Worse, once one player leaves, others soon follow, leading to wasted time, hollow victories, and broken mice.

The Key to My Blackened Heart

I probably played about 100 hours of DotA. I was never very good at it though I did benefit from a friend’s tutoring. That was another problem with the game; no tutorial. I was devoured by cougars nearly every time, unless I could find a “newbie only” game. Players without spouses and children probably don’t mind the the omission because they have time to invest into the learning curve. Players like me, those with only twenty or so hours a week to play all games, much less a single one, are food.

So for a DotA game to be supremely fun, it had to meet the following conditions:

Only rarely did all three apply to any given game, at least in my experience. The question, then, is can Valve fix DotA?

I believe they can. Given their exemplary record, my cynical and jaded heart believes. They promise a tutorial to teach players the basics, things I presume to be “stay behind your creeps” and “stick together.” They will program bots so players can cut their teeth against AI opponents before jumping into the PvP maelstrom. These same bots will replace leavers in-game, and even if they’re only semi-competent, I’ll take it. Valve also promises ranked training matches so “fucking noobs” can play with their own. They even–get this–will develop a coaching system in which a mentor can take a newer player under his wing.

12 Responses to If It Wasn’t Valve, I Wouldn’t Care