I’ve been dreaming of Love for days now. There’s an insatiable desire to stay in the surreal world I’ve come to inhabit. I find myself distracted, eager to return to the moving picture of fantasy, colour and light. To star gaze as the night draws in and to revel in the spectacle…

Love is a different world. A game apart from everything and anything I’ve ever played. It’s simplistic in its beauty but agonizingly stunning. There are no words to describe the moment you arrive in the strange world.  The visuals are something you won’t have ever experienced; an ecstasy trip of vibrant colours and an explosion of moving art. An orgasm. It’s the only way to describe it.  You’ll find yourself staring (at nothing in particular) as time rolls by. You’ll watch the sun rise and fall and the stars ignite in the sky like blurred cats eyes against the deepest of blue nights. An entire world to explore as if painted before your very eyes.

I find myself wandering for hours, encountering no one yet pulled by a force to discover and explore the procedurally generated world. I’m searching for Tokens, items that are found in the wilderness and AI settlements, on top of altars. I’ve discovered they are used to add new features to my settlement. Once you’ve found them you have to carry them back, but if you choose to teleport, though, you’ll drop them. Journeys at times are arduous and treacherous, yet you don’t care. Walking miles is the experience as you stumble into the unknown world, aimlessly wandering in fear of encountering other settlements. 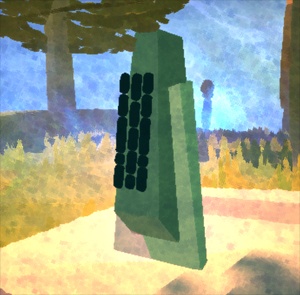 I’ve learnt you can only equip four tools at a time, once you’ve claimed the Tokens for them at your settlement, with each tool serving a different but unique purpose; from a blaster to shoot your enemies to windmills which power your infrastructure. Each Token will aid in the sculpting of your settlement. My settlement looked awful to begin with and while no masterpiece, has begun to resemble a fortress of design after days of hard labour.

I was genuinely shocked the first time I encountered someone. Giddy in fact. I hadn’t said a word for hours.  The person I encountered was odd in appearance.  AI and all player characters within Love are also procedurally generated, making unique but fascinating avatars.  Combined with the random name generator that designates you a specific name based on your settlement (each settlement bestows a specific surname), you genuinely feel a sense of being in another world, embodied into a strange creature. My name is Fram Bahumon and hers was Sahi Bahumon.

We spent the next hour together, building and sculpting the land around us. Attempting to understand our tools and how to use them. At one stage Sahi had dug herself into such a huge pit she couldn’t actually get out. Thankfully, the teleport button allowed her to return to the centre of our settlement, as I busily filled in the hole she’d left behind. It was only then I discovered I could pull and push land in a similar fashion to Populous. Holding the left mouse button down on a specific area with the blend tool equipped, followed by moving the mouse upwards, down or outwards allowed the earth to move.  A 10 meter column of earth fired skywards suggested it works wonders. Thankfully, it’s only a matter of repeating the process with a different tool to undo any mistakes or to craft it into something finer.

After experimenting with my new found tools the game gradually provided me with new titles and unlocked more abilities for me to use; the wispy informative text creeping onto the screen in a dream like fashion. At one stage I was so busy digging I became known as Tekton Rahmi Bahumet, the game letting me I had a greater ability to craft the world around me in one fashion or another, something I don’t yet understand.

Power is key in Love, with various sources around the game world that you need to manipulate in order to relay the energy to your settlement. A coordinate control panel on many of these objects allows you to angle them towards your settlement, but I’ve not quite worked out how to do this myself.  After returning to my settlement (having not played the game for several day), it’s apparent Sahi has certainly discovered how, as our home now resembles a hub of neon lights, force fields and gun turrets in preparation for defending ourselves against what I’ve been told is devilish AI and their artillery bombardments. 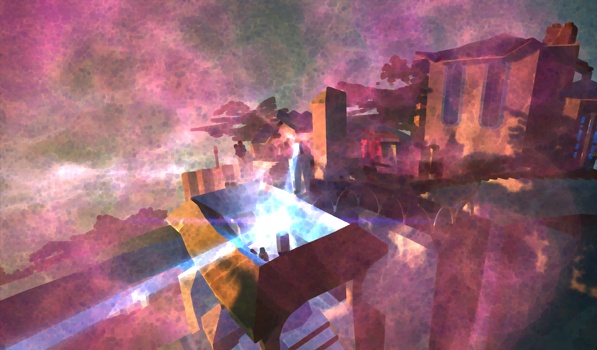 A unobtrusive tutorial that gracefully appears on screen is a great help and does a wonderful job of keeping things as simple as possible, but with so much fun to be had in discovering things by yourself, it’s entirely fair that it only covers the basics. The interface is minimalist and is represented by two bold black borders at the header and footer of the screen which flash red if you take damage. The header is used for chatting and displays just your name, with other players onlyable to hear you if nearby. The footer shows your four tool slots and various other symbols that reflect mouse sensitivity, invert axis and graphical options. It’s incredibly simple and refreshing to not be burdened with menus.

I should note though that I’m reluctant to read guides to uncover the game’s secrets, but the loneliness at times can be suffocating, especially if you want help. The music however will become your closest friend; it’s eerie but delicate and compliments the game tremendously.

With 150 days left to experience Love before I have to pay €10 for further play time, Love remains the finest money I’ve ever spent on a game, simply because of the profound effect the visuals have had on me. I’m actually finding other games so visually boring I instantly revert back to it. What I do find difficult to understand is why the game hasn’t been catapulted into the stratosphere like Minecraft. I personally have no idea, as comparisons will inevitably be drawn between the pair and I would personally lean towards Love every time, simply from an aesthetic standpoint.

As an achievement by one man, I couldn’t be more in Love.